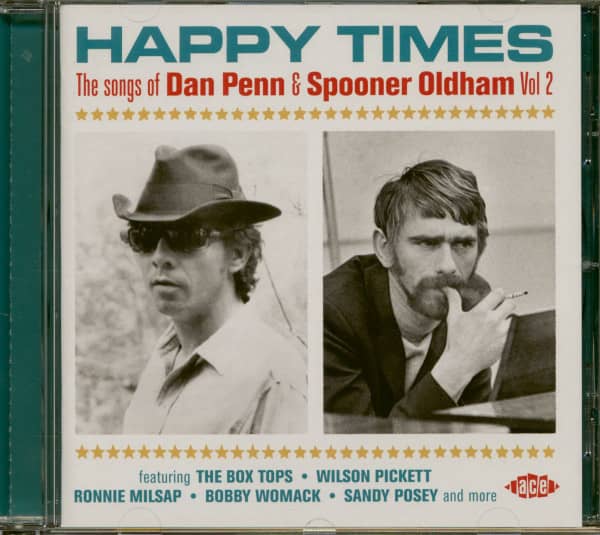 (Ace Records) 24 tracks with 28 page booklet.
Another two-dozen stellar collaborations by these magnificent songwriters performed by artists from the worlds of soul, pop and country music, many released on CD for the first time.

The success of “Sweet Inspiration” (CDCHD 1284) – not to mention constant customer requests for a follow-up – has more than warranted a second dip into the songwriting catalogue of Dan Penn and Spooner Oldham. It’s taken a while to come together, but we feel the wait has been more than worthwhile. “Happy Times” brings you another two-dozen stellar collaborations and goes even deeper into their sheaf of copyrights than our previous volume did.

Here we feature tracks from their time working together in Muscle Shoals and Memphis, with a broad spread of repertoire that embraces deep soul, southern pop, sweet soul and country. Star names include Dan’s pet project the Box Tops, Sandy Posey, Wilson Pickett, Ronnie Milsap, Dee Dee Sharp, B.J. Thomas, the Ovations and many others whose careers intersected in the 60s with those of Dan and Spooner.

We end the collection with a rarity in their catalogue – an instrumental, featuring Spooner on piano. This quiet, reflective tune in waltz-time was cut at FAME in 1966 and leased to Chess as the flipside to the groovy ‘Two In The Morning’. The tape box for both tunes credits the artist as the Len Spoon Trio, although that had become Spooner’s Crowd by the time the record was issued. Every soul fan with their salt will know ‘Two In The Morning’ but ‘I’ll Be Your Baby’ has never been reissued in 54 years. It provides an unusual and delightful closer.

Almost none of the recordings featured here have been on any previous Ace CD. Many have never been on CD at all. With a booklet chock-full of information and illustrations, and the usual Ace attention to detail in the annotation, “Happy Times” is another salute to the words and music of these magnificent songwriters.
TONY ROUNCE