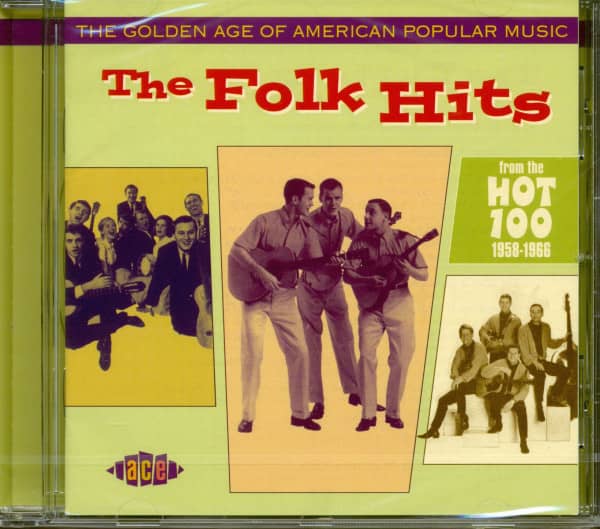 Just About Every Folk Hit To Reach Billboard's Hot 100 Chart During Pop's Golden Age, Following In The Wake Of The Kingston Trio's Ground- Breaking 'Tom Dooley' In 1958. Includes A 32 Page Booklet With A Full History Of The Times And Many Rare Illustrations.

The new volume in Ace’s Golden Age of American Popular Music series, THE FOLK HITS is a compendium of just about every folk hit to reach Billboard’s Hot 100 (and a couple that ‘bubbled under’) during the so-called Golden Age when folk music was regarded as a form of light entertainment rather than a means of political or personal expression.
The era kicked off when the Kingston Trio topped the international charts with Tom Dooley in 1958 and reached its commercial peak in the summer of 1963, before fading in the aftermath of President Kennedy’s assassination in November. Some argue that ‘Tom Dooley’ was as important a record as ‘Heartbreak Hotel’ or ‘I Want To Hold Your Hand’ in that it heralded an entirely new phase in popular music and profoundly influenced the music of the 60s.
Pretty soon, every major label (and some minor ones too) had a folk group on its books. Some, like the Brothers Four and the Highwaymen, were college kids who’d turned professional, while others such as the Limeliters and Bud & Travis were older, more experienced pros. Whereas 50s rock’n’roll was seen by many parents as a malign influence on American Youth, folk music in the Tom Dooley age was perceived as having a greater cultural validity and young men and women were positively encouraged to take up the guitar or banjo and ‘sing out’.
Record companies attempted to break their folk acts through hit singles, hoping to stimulate sales in the lucrative album market and create career longevity for the artist. By the early 60s folk music had become big business and when TV took an interest, it became a national obsession. While some artists became radicalised, many others stayed apolitical and sought merely to entertain. For a time, the boundaries between folk and other styles became blurred by commercial imperatives. Story-song country records such as Big Bad John and El Paso became big pop hits in the wake of Tom Dooley. Even Johnny Cash (heard here with It Ain’t Me Babe, his first UK hit) hovered uneasily between country and folk for a brief period, appearing alongside the Brothers Four in a no-budget exploitation movie titled Hootenanny and cutting folk themed albums such as “Bitter Tears”.
Here then are the hits of the folk era assembled for the first time on one CD from the best possible sources. As well as all the major hits, such as Green Green, are several tunes that have never, or only very rarely, appeared on CD before, including Ballad of The Alamo by Bud & Travis (in stereo) and Stranger In Your Town by the Shacklefords, a studio group assembled by Lee Hazlewood whose song/production it was. Fans of Hazlewood’s laconic style will immediately detect his lugubrious baritone and style. The Highwaymen’s Michael and Cottonfields have not been available on CD for over a decade and are heard here in stereo. Also unavailable for some time, Billy Edd Wheeler’s quirky Ode To A Little Brown Shack Out Back, a privately recorded live performance, that made it halfway up the Hot 100 in 1964 to become the only hit record eulogising an outside privy. The Kingston Trio’s four best known hits are presented here as the most representative sample of their work. At their peak they were so popular that 20 percent of Capitol’s profits were generated by the Trio’s records. And they were every bit as good as their place in history would suggest. Peter, Paul & Mary’s If I Had A Hammer appears on a compilation for the first time.
The humungous 32-page booklet contains a magnificent essay following the development of the post-war folk scene and details of each record featured on the compilation together with many rare ads and photos from an era so affectionately spoofed in the movie A Mighty Wind. It’ll have you a-hummin and a-strummin’!
By Rob Finnis

Tracklist
Various - Golden Age Of American Popular Music - The Folk Hits (CD) CD 1
01 Walk Right In
02 If I Had A Hammer
03 Where Have All The Flowers Gone
04 Green, Green
05 It Ain't Me, Babe
06 Michael
07 We Shall Overcome
08 Greenback Dollar
09 A Stranger In Your Town
10 Winkin', Blinkin' And Nod
11 Ballad Of The Alamo
12 Tom Dooley
13 A Dollar Down
14 Greenfields
15 Silver Threads And Golden Needles
16 We'll Sing In The Sunshine
17 Hootenanny
18 Don't Let The Rain Come Down
19 Reverend Mr Black
20 Please Sell My Daddy No More Wine
21 Lizzie Borden
22 Ode To The Little Brown Shack Out Back
23 Cotton Fields
24 There's A Meetin' Here Tonite
25 Tom Cat
26 Summer's Come And Gone
27 Little Boxes
28 The Unicorn