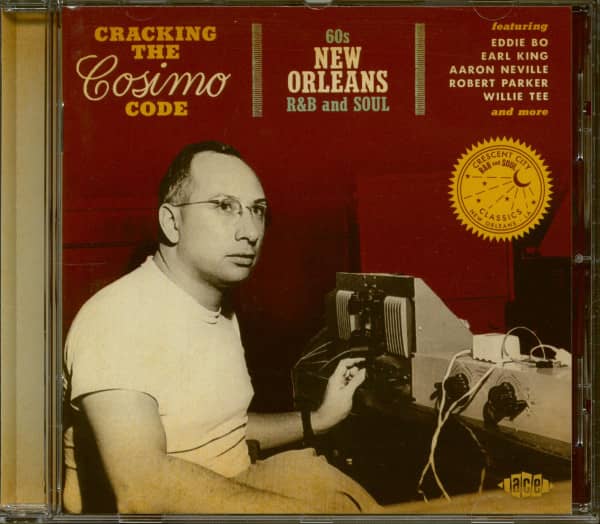 What is the Cosimo Code? Quite simply, it’s an ongoing, website-based discographical tool at www.cosimocode.com documenting the 1960s recordings from Cosimo Matassa’s studios in New Orleans.
This CD release has been compiled by website co-founders Red “Soul Detective” Kelly, John “Sir Shambling” Ridley and yours truly. It brings to life the Cosimo Code data, which is unveiling many of the mysteries surrounding New Orleans R&B and soul recordings from the post-Fats Domino era.
As the 60s started, Domino and his producer Dave Bartholomew, with their timeless brand of R&B, still dominated the New Orleans recording scene. Soon there would be a changing of the guard, led by producers Allen Toussaint, Harold Battiste, Wardell Quezergue and Eddie Bo. Under these younger men, the music would take on a funkier soul edge while still imbued with the eternalNew Orleans streetrhythms. The outstanding session men, who replaced the 1950s studio band, include Nat Perilliat (tenor sax), George Davis (guitar) and Smokey Johnson (drums).

Among the jewels to be found here are the pivotal New Orleans national hits ‘Ooh Poo Pah Doo’ by Jessie Hill, ‘Get Out Of My Life, Woman’ by Lee Dorsey, ‘Barefootin’’ by Robert Parker and ‘Tell It Like It Is’ by Aaron Neville. Then the big regional breakouts include Earl King’s ‘Trick Bag’, Oliver Morgan’s ‘Who Shot The LaLa’ and Willie Tee’s ‘Teasin’ You’. The set is rounded off by relatively unfamiliar local records which all bear that unique New Orleans stamp, including ‘Lover & A Friend’ by Eddie Bo & Inez Cheatham which is a big funk anthem, Blazer Boy’s thunderous hand-clapper ‘New Orleans Twist’, the Party Boys’ hilarious ‘We Got A Party’ in true Huey “Piano” Smith & the Clowns goodtime style, and Dave Bartholomew’s red-hot remake of his old favourite ‘The Monkey’. There are 18 tracks new to Ace CDs.

The 1960s New Orleans R&B story took a major twist when Cosimo Matassa formed Dover Records as a one-stop recording-to-manufacturing-to-distribution-to-marketing organisation to give the local music community an outlet to regional and national markets. For a while Dover was a huge success, and was directly responsible for two significant national hits: ‘Barefootin’’ and ‘Tell It Like It Is’. However, when the distributors didn’t pay up, Dover was faced with massive record-pressing costs and collapsed in a heap in 1968, taking the studio and, essentially, New Orleans R&B with it.

Oddly enough, comprehensive New Orleans R&B and soul reissues from the 1960s are thin on the ground, mainly because of ownership and rights problems surrounding the many small record labels that proliferated under the Dover Records umbrella. By overcoming these licensing problems, we have arrived at this rather special release.

Ultimately, this compilation and the website itself are fine tributes to Cosimo Matassa, the man in the control room of the only local recording studio that mattered during the golden age of New Orleans R&B and soul. (John Broven)