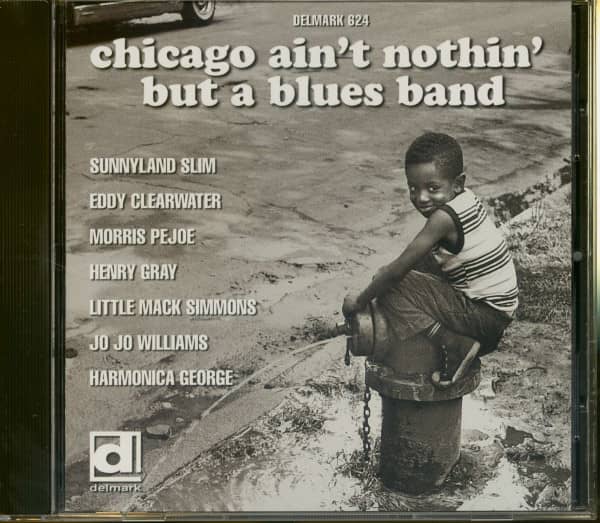 Early recordings, including many unissued sides, made by Eddy Clearwater's uncle, Rev. H.H. Harrington who was running his own recording studio and record company out of his church. Rare and wild stuff.

With Eddy Clearwater, Sunnyland Slim, Morris Pejoe, Henry Gray, Jo Jo Williams, Little Mack Simmons and others. An explosion of nuclear-powered Chicago blues from 1958-'60 Atomic-H masters including many previously unissued recordings! A full hour containing 23 songs, most of which are not on the LP version.

Atomic-H Records was a tiny label that recorded blues and gospel but only issued a few 45s. It was owned and operated by Rev. Houston H. Harrington who was also Eddy Clearwater's uncle and was responsible for Eddy making his way to Chicago from Alabama. The CD of Chicago Ain't Nothin' But A Blues Band features new descriptive notes containing additional information about Atomic-H and personnels.

Arriving in Chicago in 1952, Robinson gigged around the West and South Sides during the second half of the decade, notably at Sylvio's and the Happy Home. His only Atomic-H session commenced in the summer of '59. when the harpist strolled into Balkan to lay down a mournful "Sad And Blue" and the soaring "Sputnik Music" (Clearwater and Willie Johnson shared guitar duties). They went unissued at the time, and George had to wait a full decade before Toddlin' Town released his debut 45. the sizzling soul workout "Get Some Order (About Yourself)." Harpist Little Mack Simmons was another familiar presence at Atomic-H headquarters: he leads the instrumental "Blues For Atomic-H" on this anthology.

Thanks to Jim O'Neal, we now know that George & His House Rockers were led by George Corner (or Conner), who also answered to the handle of Birming-ham George and now resides in Alabama. His "Morning Love Blues" was issued on Atomic-H in 1972. a good decade or more after he cut it. His two cuts derive from different dates. "You Know You Don't Love Me" having been done in a more professional studio setting than the demo-quality "Morning Love Blues." Eddy