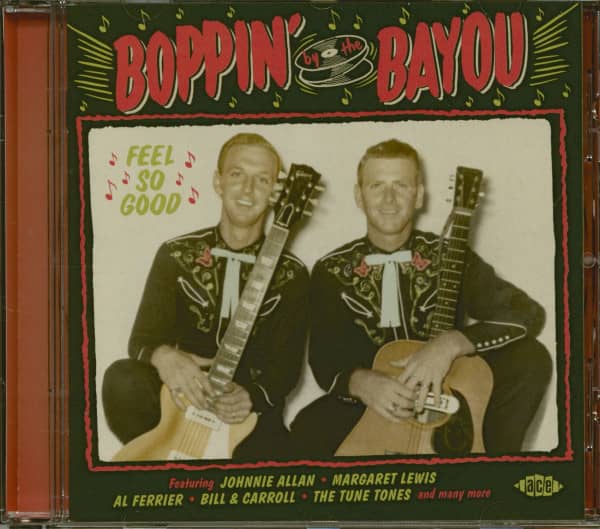 Hear that biting guitar, the thud of the bass, the pounding piano and the driving drumbeat; it can only mean “Boppin’ By The Bayou” is back! This is the 22nd in the “... By The Bayou” series, and the 8th to go “Boppin’”. “Feel So Good” is the subtitle of this compilation and also of one of Bill & Carroll’s rockabilly tracks, cut by Eddie Shuler and leased to Don Pierce who placed it on Starday’s Dixie subsidiary. Confusion was caused when the “&” was left out of their name and the record was consequently thought to be by Bill Carroll, a solo artist. There is more rockabilly dynamite in the first-time reissue of Ray Vict’s 1956 classic ‘We Gonna Bop, Stop, Rock’ (how an inferior alternate version of the song came to be miscredited as the original is explained in the booklet).

Returnees from previous volumes include Al Ferrier with his take on ‘You’re Humbuggin’ Me’, Larry Hart with a more primitive rockabilly version of ‘Coffins Have No Pockets’, a couple of tracks from Bee Arnold; and one each from Johnny Jano and Johnnie Allan. Stir in a favourite track of mine by Margaret Lewis, another outing by the Tune Tones whose previously unissued material has gained legendary status through this series, plus Frankie Lowery, Charlotte Hunter and Linda Brannon, and you have yet another red hot Louisiana gumbo of boppers.

Also included are two great rockers from the late Floyd Badeaux’s Spindletop label out of Port Arthur, Texas. Floyd leased these tracks to us during one of my visits to his home/studio, but sadly he died prior to this CD being issued. Deepest sympathies to his wife, Lois, who assisted me with artist info. Also from that corner of SE Texas, bordering Louisiana, is a track from George Jones in his “Thumper” persona. We have also included two tracks by unknown artists: one uncovered in the J.D. Miller vaults, and the other from the Eddie Shuler archives. I would love to learn who the performers are, but until then, let’s just enjoy them as great unknown rockers.