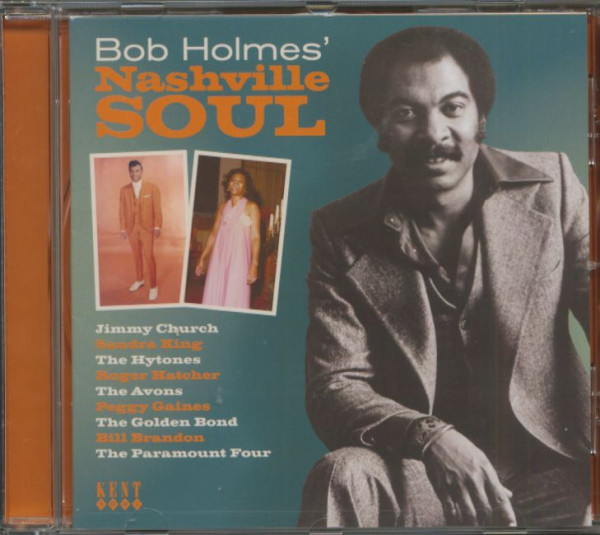 In the 60s and 70s, Nashville was a hothouse of R&B, soul and jazz. Bob Holmes was a central character.
With the publication of E Mark Windle’s book House Of Broken Hearts, the city of Nashville’s black music scene is being studied in detail for the first time since Kent issued the CDs “Uptown Down South” and “Music City Soul” in the late 90s. To coordinate with the book we are releasing another compilation of Nashville soul, this time concentrating on the work of multi-talented songwriter, producer and arranger Bob Holmes. Those earlier CDs featured Excello/A-Bet and Poncello/Ref-O-Ree recordings respectively. This new collection also draws from those sources, plus Bob Holmes’ personal tapes and other third-party licenses. The time span is 1965 to 1980.
The Hytones are the most-featured act, albeit in various guises. The superb mid-tempo ‘Runaway Girl’ was previously available only on a 100 Club promo 45, and their rare deep soul A-Bet release ‘I’ve Got My Baby’ gets its first release on CD. The guys also team up with the Avons for the previously unheard ‘Oo Gilly Baby’, dedicated to local DJ Clarence Kilcrease aka “Gilly Baby”. Hytones members Freddie Waters and Eddie Frierson sing solo on captivating Holmes songs and appear as a duo on ‘Steady’, an atmospheric late 70s groove. The Avons’ own scarce A-Bet 45 ‘Got To Get Used To You’ also makes its CD debut.
Sandra King’s ‘Leave It Up To The Boys’ is an expensive record to find and shows how Holmes was stylistically influenced more by New York and Detroit than Memphis. Freddie North’s beautiful big beat ballad ‘Don’t Make Me Look So Bad’ and the Paramount Four’s stunning ‘You Must Leave Her Because You Love Her’ are similarly polished. Holmes worked extensively with R&B producer Ted Jarrett on superb late 60s recordings by great Nashville singers such as Gene Allison, Roscoe Shelton and Peggy Gaines, and even wrote and produced ‘Tip On In’, a hit for blues veteran Slim Harpo.
By the 1970s his expertise was being appreciated by other companies. He arranged Joe Tex’s hit dance track ‘Under Your Powerful Love’ for Dial and Bill Brandon’s modern soul classic ‘The Streets Got My Lady’ for Piedmont. He could also deliver authentic southern soul, as heard on Jimmy Church’s ‘Right In The Palm Of Your Hand’ and a beautiful, although unfinished, version of Clyde McPhatter’s ‘Crying Won’t Help You Now’ by Johnny Truitt. The Golden Bond’s superb harmony single ‘I Know (It’s All Over)’ is featured in its previously unheard full 4-minutes-plus version, while Roger Hatcher’s Volt 45 ‘I Dedicate My Life To You’ demonstrates great musical sensitivity and Ruthie’s smooth ‘Let’s Try Love Again’ from 1980 is evidence that Holmes could move with the times.
A man of many talents, Holmes studied and lectured at several colleges in Nashville. His musicality is apparent on studio group Little Rock Brotherhood’s instrumental ‘Girl Watching On Broadway’. He wrote for and performed in jazz groups throughout his life, adapted to disco and even electro funk in the late 70s, and went on to write film music and classical works. He also pioneered music production on television with the local Night Train show which ran from1964 to 1967 and featured many of his associated acts.
Ady Croasdell