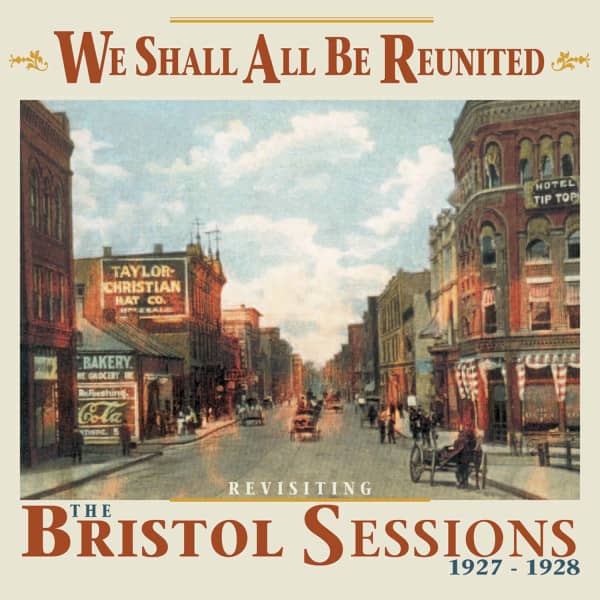 P Secure bonuspoints now
Description Review 1
Description
1-CD with 44-page booklet, 26 tracks.  ‘We Shall All Be Reunited’ showcases on a... more
Close menu

Various Artists: We Shall All Be Reunited - Revisiting The Bristol Sessions 1927-1928 (CD)

1-CD with 44-page booklet, 26 tracks.
‘We Shall All Be Reunited: Revisiting The Bristol Sessions, 1927-1928’ casts new light on an old story - that of the 1927 Bristol sessions.  Conducted by Victor Records A&R producer Ralph Peer, this seminal event from the early years of commercial recording in the 1980s was nicknamed ’’the Big Bang of Country Music,’’ while the city in which the event occurred - Bristol, Tennessee/Virginia - was officially dubbed “the Birthplace of Country Music.” Featuring 15 key recordings made in Bristol during late July and early August 1927 - including first-ever recordings by the now-legendary Carter Family and Jimmie Rodgers as well as recordings by several important early country musicians, including Ernest Stoneman, Henry Whitter, Blind Alfred Reed, and others – ‘We Shall All Be Reunited’ revisits and reinterprets that 1927 event.  To provide a holistic portrayal of Peer’s recording work in Bristol, this album includes 11 stand-out selections - including several classic recordings of old-time and gospel music by such musicians as Uncle Eck Dunford, Ernest Phipps, and Alfred Karnes - from Peer’s overlooked but equally worthy October and November 1928 recordings in Bristol.
The album was produced by Ted Olson (producer of ‘The Bristol Sessions, 1927-1928: The Big Bang of Country Music’, Bear Family Records’ Grammy-nominated 2011 boxed set), ‘We Shall All Be Reunited’ features new liner notes written by Olson in which the 1927 sessions are reassessed based on recent scholarly research and discussion.  The liner notes recount what happened in Bristol, who participated in the sessions, and why those recordings were historically significant, but also how that event was romanticized and distorted by myth, hyperbole, and hype.
To contextualize the 1927 Bristol sessions the liner notes for ‘We Shall All Be Reunited’ explore ’’the rest of the story’’—the related cultural occurrences all-too-often ignored or marginalized during mainstream public discussions about the Bristol sessions. In his liner notes, Ted Olson tells the real story of the Bristol sessions - a story that proves to be much more interesting than that told in the popular ‘Big Bang’/’Birthplace’ myth.

Article properties: Various Artists: We Shall All Be Reunited - Revisiting The Bristol Sessions 1927-1928 (CD)

Tracklist
Various - Bear Family Records - We Shall All Be Reunited - Revisiting The Bristol Sessions 1927-1928 (CD) CD 1
01 Sweeping Through The Gates
02 The Wreck Of The Virginian (Take 2)
03 Narrow Gauge Blues
04 The Soldier's Poor Little Boy
05 Oh Molly Dear
06 Black-Eyed Susie
07 Johnny Goodwin
08 The Poor Orphan Child
09 I'm Redeemed
10 Rain Crow Bill
11 Susanna Gal
12 Sleep Baby Sleep
13 The Longest Train I Ever Saw
14 Your Blue Eyes Run Me Crazy
15 Standing On The Promises
16 My Name Is Ticklish Reuben
17 Shine On Me
18 I Cannot Be Your Sweetheart
19 Little Bunch Of Roses
20 Old Shoes And Leggin's
21 My Mother Is Waiting For Me In Heaven Above
22 We'll Sing On That Shore
23 Unknown Blues
24 New Orleans Is The Town I Like Best
25 I Truly Understand, You Love Another Man
26 We Shall All Be Reunited
Funktionale