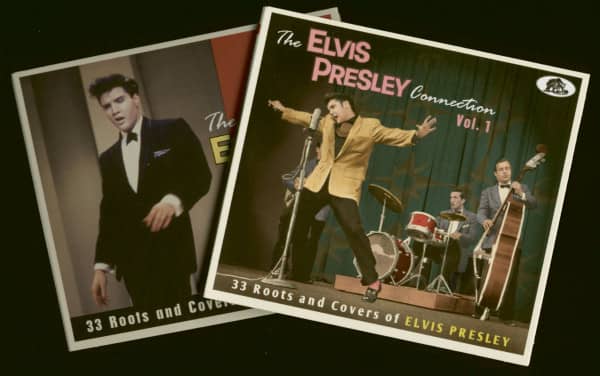 2 x 1-CD (Digipac) with 36-page booklet - 66 Tracks - Total playing time: 150:00
•  An extremely unique compilation of originals and rare cover versions of famous Elvis tunes!
•  The first volume puts the spotlight on songs that Elvis also recorded in-between 1954 and 1958.
•  Special rare recordings are included such as demos, live recordings from the decade, and unheard material.
•  The second volume continues exactly where volume one ended. It puts the spotlight on songs that Elvis had recorded in-between 1958 and 1962.
•  Some of Elvis' colleagues at SUN like Carl Perkins, Jerry Lee Lewis, Sonny Burgess, Vernon Taylor and Mack Allen Smith are also included!
•  The compilation also presents rare British Rock 'n' Rollers with their versions of Elvis songs!
•  We have of course some originals that Elvis influenced. The Eagles with Tryin' To Get To You and Freddie Bell's version of Hound Dog!
•  Some of the tracks never appeared on CD before! There's Carl Perkins live on TV in 1956 with Blue Suede Shoes. Mickie Most with Paralyzed, recorded in South Africa and Dorothy Collins live at 'Your Hit Parade'!
•  Crooners, rockers, R&B acts, all influenced by Elvis Presley, plus songs that Elvis influenced himself!
Where did young Elvis Presley got his inspirations from?
This is the main question behind the concept for this compilation. Elvis Presley's musical style and his stage performance was as unique as it can be but even Elvis Presley is not free from influences by other musicians and situations! We want to light up its darkness around this question with this first volume of the Elvis Presley connection and we did find musical answers!
How much did Elvis Presley influence the music world in the 1950s?
This is the next question we examine with this compilation. How did other performers react on Elvis Presley in the 50s, also those who hailed from other genres like pop or jazz? How got musicians from other countries than the US triggered by Elvis' blast in '56? Listen to this unique compilation and you get the answers!
Rare tracks
Many rare recordings are compiled here, some for the first time on CD! We have demos by Clyde Stacy and Mack Allen Smith (rare SUN demo)! We have rare versions of Elvis songs from British and American low budget labels like Loren Becker, Hank Smith aka George Jones, or Paul Rich. There are original 1950s live recordings by Carl Perkins, Dorothy Collins and Lucy Lynn. Originals later covered by Elvis Presley are also included, for example the rare originals Hot Dog by Young Jessie, David Hill's All Shook Up, and Just Because by The Shelton Brothers. Of course there are also well-known recordings such as Roy Hamilton's I'm Gonna Sit Right Down And Cry Over You or Vince Everett's version of Baby Let's Play House he had recorded together with Elvis' musicians Scotty Moore and Bill Black! Included is a booklet with notes to each single song and many color photos and illustrations!