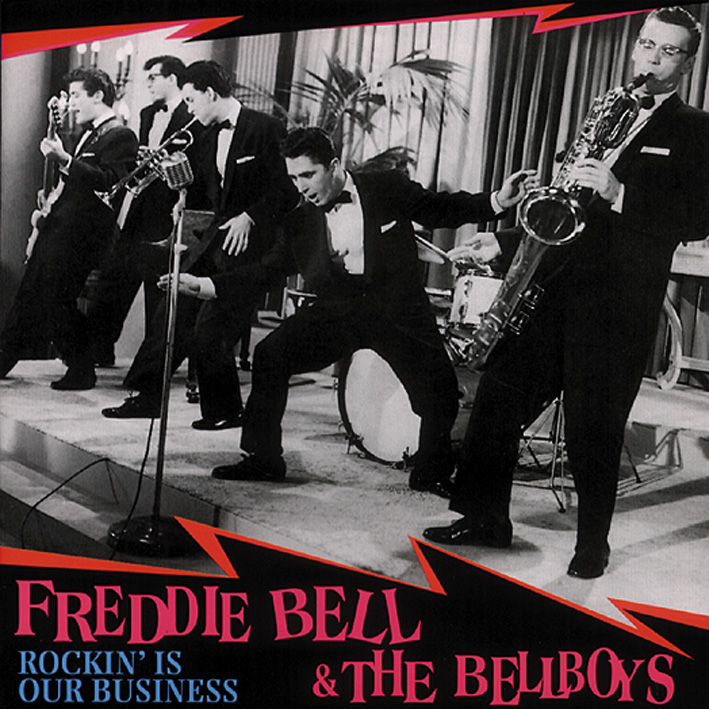 In January 1956, the first wave of rock and roll overtook Paris. In the following year Versailles released a 25 cm record with the beautiful title " Lionel Hampton et son R n'R " judged by the press as follows " A successful confusion, an incomprehensible cacophony, skilfully unchronized. »

Vibraphonists, drummers, pianists, singers, Lionel Hampton knew how to inspire with his music and his good mood, which he transmitted with ease. He dies in 2002, after a brilliant musical passage through his century.

Rumor is spreading throughout the city: American rockers are in the Olympia. More and more young people are coming to this first big fair, which is also becoming more and more lively.

That's how Freddie Bell and his Bellboys come to the Olympics. He just finished a tour that started in England, with Tommy Steele and his Steelemen (who qualified the revue Top Réalité Jeunesse as the English Elvis Presley in the 22 edition of February 1959) and the trio Albert Raisner, before going out to Holland and the wide world.

Their first recording is " Hound Dog ", from 1955 and can be found on the first French EP. Legend has it that an assistant, so impressed during a concert in April 1956, recorded the title himself three months later. And so Elvis landed a gigantic hit that, together with "Don't Be Cruel", became the best single ever placed in the US charts!

To return to Freddie Bell's version, he had to rewrite the overly suggestive text to put it on... to transfer a rabbit! "You know, to be played on the radio, you have to write about something, but not about the relationship between man and woman, which often results in ambiguous lyrics! ». And where does the title of his hit "Giddy Up A Ding Dong" come from? "That's a nickname, Ding Dong, that the Treniers gave me"!

When the authentic rockers arrive in Paris, that's a little bit more than when a show is moderated by March men, or even worse, by American imperialists, which at least Freddie Bell and his Bellboys was imputed by a certain adapted communist press.

By the way, they are a bit lonely in this program in the Olympia of June 13, 1957 with the title " Premier festival international du music-hall " which welcomes musicians from all over the world, but mainly from the East. And when it comes to rock and roll, this diabolical American music, delegations from the East could be seen leaving the hall! This somewhat surrealistic mood surprised our young rockers, but didn't take their joy in life away. They were in the framework of a musicorama, but the group remains untraceable. Initiates waited feverishly for their arrival because they had already discovered them in the film "Rock Around The Clock".

In the evening, after their sets, they roam the clubs, Pigalle, Saint-Germain-des-Prés, the Lido. Eddie Barclay's been around a lot. He distributes Freddie Bell's EPs in France, three records are released simultaneously, it seems, with the same titles, on Barclay and Mercury, the records are always on the Mercury label. On the back of the cover always the same sentence: " In the unpredictable development of the Rock an'rollers the BellBoys are certainly one of the most representative groups, as this record proves. »

We cannot determine exactly how long she will be in France. Some sources only mention the date of 13 June while others speak of a possible duration of several weeks. But they have left their mark: "Freddie Bell and his Bellboys' performance on the Olympic stage has aroused passions: ridiculous! sensational! shameful! What a rhythm!.... " (July 1957).

Before his arrival, Freddie Bell did not know much about France, apart from Maurice Chevalier, certainly one of the most popular French people in the world. But he will return regularly to Europe, to Paris, a city that he particularly likes, or to Rome, he is of Italian origin. "I like Europe because it is the land of traditions. In the United States, a tradition lasts two years! ». Just like the great moments of rock and roll! The group's bassist, Frankie Brent, also opts for Europe and settles in England, where he tries a solo career. Freddie Bell and his Bellboys remain mainly in the annals because of their appearance in the tension of the cult film " Rock Around The Clock ", or " Rock and Roll " in France.

No results were found for the filter!
Trusted Shops Reviews Toolkit: 1.1.2
Funktionale