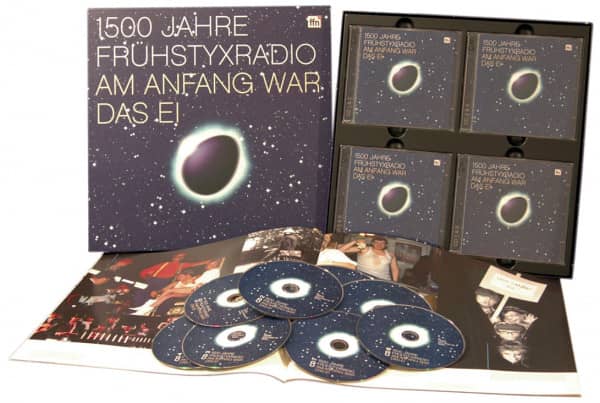 Please inform me as soon as the product is available again.
$88.07 *

8-CD box (LP format) with 47-page book, 294 single titles. Playing time approx. 628 minutes.
The slightly rounded number of years shows how quickly time flies. Just over fifteen years ago the weekly Frühstyxradio was broadcast for the last time in Northern Germany, a good ten for Berlin and Brandenburg. But long enough to look back a little nostalgic. The beautiful memory is always the enemy of a sordid present, but after listening to these eight CDs, today's TV comedy off the peg wants to taste even less. By no means everything that was created at that time was good. So it is not the intention of this selection to pick out the pearls. Rather, the huge spectrum of what six authors, speakers and producers blew into the ether for eight years is to be shown again.
For those who were already on the radio at the time, it is a sentimental journey. For newcomers, a cosmos of shrill ideas, tastelessness and philosophical profundities in a coarse garb opens up.
Each of these eight hours can be slurped in one go like a cool beer on a summer evening, but in each of them you can always make out your favourites and listen to them again and again. Frühstyxradio, that was cult avent lettre, comedy before this word could no longer be heard. The eight CD box is a unique archive of the last attempt in Germany to make yet another anarchic radio. There was also good, daring and intelligent radio entertainment elsewhere. With the Frühstyxradio one knew however rarely, what was true: intelligent or clean stupid, funny or annoying, perhaps only once again impudently. The listeners didn't laugh in front of the radio but were amazed that something like this could be broadcast. Something so bad, too, for example, you couldn't laugh at. But then again, because it was broadcast and that was very funny again.
Form your own judgement, immerse yourself in a lost world that might be better left where it is: in the past. Or not! Welcome to the year 1501 of the Prophet, all news you get on www. fsr.de
And another hint for all owners of previously released Frühstyxradio CDs: There are no content overlaps with the Eighth Box, only unreleased material can be heard here...