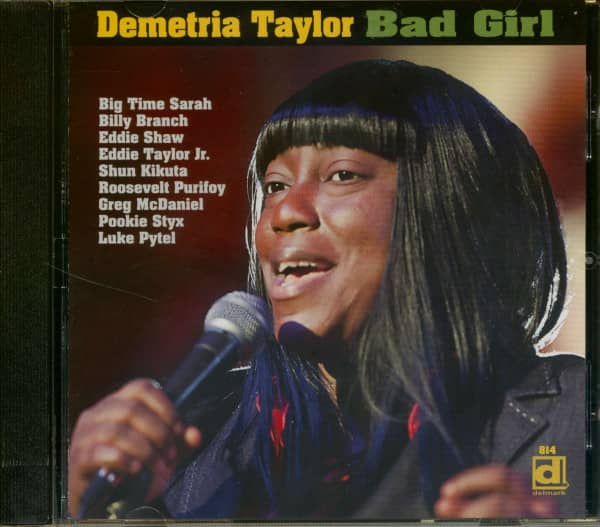 'Everything I do, I do for my mom and my dad.' - Demetria Taylor
Demetria Taylor is sitting at a table in Blue Chicago, the downtown club where in about an hour she and her band will be firing out her unique brand of Chicago-bred, forward-looking blues -'blues with a Millennium sound,' as she describes it- for a Wednesday night crowd. Many of the people who'll be dancing and partying to Demetria's music tonight probably know the Taylor name largely because of Demetria's late father. the fabled guitarist Eddie Taylor. who helped craft the Jimmy Reed sound in the '50s and '60s and also recorded several now-classic sides of his own. And, in fact, she has recast one of her father's songs, 'Bad Boy,' in her own image. to serve as the title track for her debut CD on Delmark. But as her band sets up on the bandstand and vintage Muddy Waters begins to blast out from the house speakers. Demetria makes it clear that although she reveres the Chicago blues tradition, she is an independent-minded woman determined to forge her own sound in a field too often associated with 'moldy-fig' purism. Her father and her mother, vocalist Lee Vera Taylor, groomed her to be both true to her roots and unwavering in her ambitions. 'I'm out here right now because of my mom and dad.' she affirms again.

'There's never a time I get on stage when I don't talk to God and say. 'Well, this is for you, Mom and Dad: Because I feel like they're the ones who left this legacy for all of us. My mom always told me, 'It's in you, but you got to find it. You got to find yourself. You can sing: you just gotta bring it out.- 'But I want to keep going,- she continues. -I want to take my father and everything else I know. and take it and do it my way. Her attitude is the result of growing up in an environment where music from multiple generations and genres coexisted in joyful harmony. She lent her own voice to that harmony early on. 'I always have loved to sing,' she says. 'I used to be a little girl running around the house: 'We gonna pitch a Wang Dang Doodle all night long!' I used to see [my father] on album covers and see him on videos and different stuff. I remember [blues legends] Eddie Shaw. Floyd Jones, Little Wolf. Johnny Littlejohn, Sunnyland Slim. people like that coming around the house' my father used to sit around and tell stories of when he was coming up. When he passed away [on Christmas Day, 1985] I was a little girl. but I can remember bits and pieces of things. 'I was into jazz and blues: people like Koko Taylor, Bessie Smith, Big Mama Thornton. Eddie Shaw, Nowlin' Wolf, just a lot of musicians I grew up listening to. Lena Horne, Dionne Warwick sometimes, Anita Baker. And a little bit of rock - Jimi Hendrix. Michael Jackson. Janet Jackson.

As I got older. I just felt like that stuff started getting tired. boring to me. I just wanted to do something different. so I started coming to the blues clubs.' By this time, Demetria's older brothers, Tim and Larry, had established themselves as drummers on Chicago's West Side circuit. Demetria herself played drums for quite a few years, but after being slowed down by carpal tunnel syndrome in her hands, she started to focus more on singing. Her sister Edna, who now sings gospel, also performed on occasion. and her brother Eddie Taylor Jr. was honing a guitar style modeled closely on that of his world-famous father. 'Every last one of my mom's kids can do something.' says Demetria with pride. 'All my mom's kids are very creative, and bright and smart.' Larry and Eddie Jr. have since recorded well-received CDs of their own: Tim travels the world laying down the rhythm for veteran saxophonist and ex-Howlin' Wolf sideman Eddie Shaw.

Their success has encouraged Demetria ('I wanted to do it, too, to let everybody know what I can do')' however, she also knew that she needed to affirm her own musical identity by striking a balance between roots and innovation. In that spirit, she has crafted a CD that both pays homage and serves as a declaration of independence. 'Every song I've done,- she avers, 'I've done it in honor of the people I was raised up on. I dedicate my first CD to all of them. I love the traditional blues. But I want to go other places with my blues. I want to do the Chicago sound. but I want to do it in my own way.

Thus she plants her stamp on tributes to Koko Taylor (-Voodoo Woman' and the anthemic 'Wang Dang Doodle,' featuring a guest appearance by veteran Chicago blues chanteuse Big Time Sarah. who also weighs in on the Willie DixonlHowlin' Wolf perennial 'Little Red Rooster') and Magic Sam (-All Your Love'): 'When You Leave. Don't Take Nothing' in honor of Chicago vocalist Artie 'Blues Boy- White): the title song. a remake of her father's 1955 recording 'Bad Boy,' which Demetria says moved her so deeply that she cried as she recorded it: Luther Allison's deep-blues ballad 'Cherry Red Wine:' and 'Big Boss Man,' originally recorded by her father's legendary partner Jimmy Reed. The opening medley is a dual tribute to Willie Dixon and -yet again- Demetria's idol. the late Queen Koko. But these tracks. Demetria emphasizes. are merely the beginning of her musical journey. 'When I do my next CD.' she enthuses, 'I want to do all originals. I want to let people know that I got different styles. I'm just not just a lump-de-lump girl, and try to develop something that people can know me for who I am. I'm here, I'm ready. I'm ready to go out there and just let the world know what I can do.- -David Whiteis, April 2011