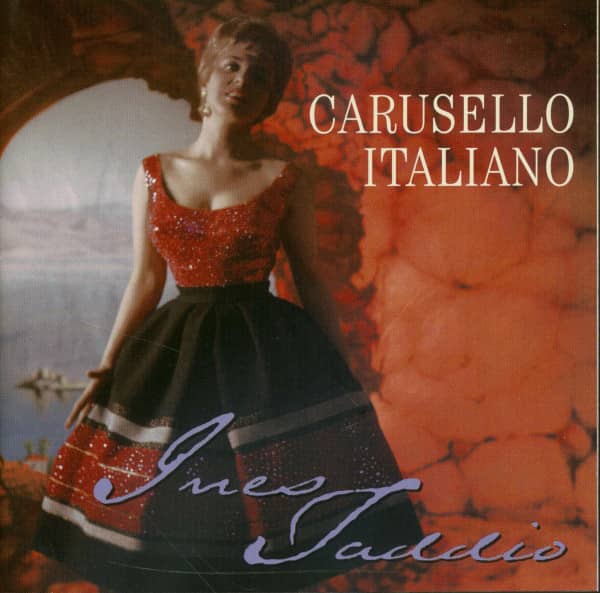 This article is deleted and can no longer be ordered!
Please inform me as soon as the product is available again.
P Secure bonuspoints now
Description
Learn more about Ines Taddio
Review 0
Description
In the show scene she has earned herself a first-class reputation and is good at business.... more
Close menu

In the show scene she has earned herself a first-class reputation and is good at business. Accompanied by the sympathy of the audience, she whirls across the stages of Europe and of course also makes frequent guest appearances in Italy. When she accepts the invitation to a pop festival in Taormina and presents her songs there, the organizer asks her in astonishment: "Do you want to sing German here? Ines says yes, because she doesn't have any other pieces. So she performs her German songs and gets a big applause for it.
With the successful hit Pigalle she starts at the International Song Competition in Pesaro for Germany. Other prominent participants include Georges Moustaki, who sings for France, and Marie Dieke (better known here as 'Ria Solar'), who represents Sweden.
In spring 1962 - supported by numerous radio and television appearances - her first single was released by the new record company. Heinz Gietz continues to use the Italian trick in the beginning and so you experience the singer as usual sometimes longing romantic, sometimes lively temperamental with southern inspired hits. Only when there is no resounding success does Ines Taddio try a more contemporary sound and, for example, have Ines Taddio sing a cover version of the Brenda Lee hit As Usual. This finally gives her the opportunity to show a little more of her ability and versatility on record.
Appearances in the music films 'Tanze mit mir in den Morgen' and 'Das ist die Liebe der Matrosen' as well as in the thriller 'Einer frisst den anderen' - a German/Italian co-production with the Hollywood sex bomb Jayne Mansfield - have increased the popularity of the singer even more.
At that time she was much better known in Hungary than in Germany. As one of the first western singers she appeared in the Eastern Bloc and went on tour with artists like Jimmy Makulis or Rocco Granata. In Hungary she is soon regarded as a top star and also records there. With Speedy Gonzales she even lands a bestseller there. In 1965 she made a guest appearance in Budapest with Vico Torriani. Both are enthusiastically celebrated by the press and the public. The fact that Vico Torriani is then quite hostile to us because of his artistic activities beyond the Iron Curtain is only marginally mentioned here.
Another spectacular event in Ines Taddio's career took place in 1964. As part of the German-Soviet Cultural Agreement, she is touring Russia with the Kurt Edelhagen Orchestra. 25 concerts in Moscow, Leningrad and Sochi are on the programme. The soloists are Monika Grimm, Will Brandes and the Medium-Terzett.
The first concert in the Moscow Sports Palace, which has a capacity of almost 15,000 visitors, was a sensational success. Ines has rehearsed a song in Russian for this tour, but it will not be approved when the programme is accepted by the representatives of the Soviet State Concert Agency. Despite this, she ignites storms of enthusiasm during her performances, especially with the Schlager 24 Mila Baci, which has a twist-like rhythm. The twist was officially frowned upon in Russia at the time, but that's why it's in such high demand among young people.
Following this tour, the ensemble will give a guest performance at the Friedrichsstadtpalast in East Berlin and in Dresden - but without Monika Grimm, who is regarded as a 'GDR refugee' - and will also tear the audience from their seats here. On the occasion of these appearances the Amiga releases the EP 'Kurt Edelhagen in Berlin' on which Ines Taddio with the Tony Renis hit Quando, Quando can be heard.

Signore, Salute Cin-Cin, Capitano D'Amore - already the headlines of her hits indicate that the interpreter can actually only come from 'Bella Italia'. Even if you may not see it for the blond Ines Taddio at first glance, it is true.

On 28 December 1928 - under the sign of the Capricorn - she was born in the small northern Italian town of Enemonzo near Udine. Already as a young girl she attracts attention for the first time, because in a regional beauty competition, a preliminary round for the 'Miss Venetia Julia', she is chosen as 'Miss Carnia'. That gives her a little film reel next to Marcello Mastroianni.

But her parents, who own a small business, attach importance to a solid professional education and enable Ines to study, because she - just like her two sisters - should become a teacher. After graduating, she goes to Salzburg, because it is her father's wish that she learns German. And here, things are taking their course. At first she is busy studying vocabulary and grammar rules and is making good progress due to her linguistic talent.

Her German teacher, who works at Österreichischer Rundfunk, is not only taken with her eagerness to learn, but even more with her voice and keeps urging her to audition at Radio Salzburg. Since Ines, as an Italian, naturally has music in her blood, she finally lets herself be persuaded. Jo Balke, the studio boss, is immediately enthusiastic and so 1955 some radio recordings are produced.

"These were later included in the Italian radio programme", the singer says, "and thereupon they offered me an annual contract. Of course I said yes."

So she's going to Rome. From now on, she will stand in front of the studio microphone regularly and will also take part in many of the station's public events.

Ines Taddio not only has a talent for singing: blonde, long-legged and equipped with a dream figure, she is also a stunning appearance. Marilyn Monroe is what they call her in musical circles. No wonder that the men she works with always want to be in close contact with each other and are looking for fleeting adventures. But that is out of the question for the singer. When the constant approaches of the hot-blooded southerners become too much for her, she goes back to Salzburg and soon becomes a busy vocal interpreter for the ORF.

Her vital voice with the unmistakable Italian accent was well received by the listeners and in 1956 the first records were released by Austroton. Then, as a representative of Austria, she appeared several times in the then popular radio programme 'Musik kennt keine Grenzen', which was also broadcast by German radio stations. The well-known composer and producer Heinz Gietz listens to her there and immediately signs her up for the Hamburg Polydor.

Since 1959 singles have been regularly produced with her in Cologne. She makes her television debut in Germany in the programme 'In Hamburg geht man gern a Land' and the programme guides bring detailed reports about the new pop star from Italy on this occasion.

But they have also long been noticed in neighbouring countries. In the summer of 1959 she was engaged alongside Edith Piaf and Charles Aznavour for the supporting programme of the Knokke Festival.

"Being announced on a poster together with such famous stars is of course a great thing and I was incredibly proud of it back then," reveals Ines Taddio, and her eyes are still shining today when she talks about it.

Within a short period of time, she managed to make a quite respectable career in Germany, even though she did not achieve more than respectable successes in her records at first. However, appearances and radio broadcasts are increasing and she collaborates with all renowned orchestra conductors such as Erwin Lehn, Franz Thon, Werner Müller, Alfred Hause, Cedric Dumont and Willi Berking. Not least because of her international contacts, many of her German recordings are also recorded in Italian or French.

1961 it goes further upward. Initially, she took part in the Swiss preliminary round of the 'Grand Prix', which was also broadcast on television.

With 'Our great aunts' another film project follows. The white seagull is the title she presents here. But she is not only allowed to sing but also to give a small taste of her acting talent. The script provides that she, together with Vivi Bach and Evi Kent, will turn upside down a strictly run boarding school for girls with higher daughters. The young ladies are strongly supported by colleagues such as Gus Backus and Bill Ramsey, who mainly wear women's clothes. The film, which is fully geared to Klamauk, was a box-office hit at the time and is still appearing in the programmes of private television stations today.

Just at the time when the sales figures of their records were steadily rising, Heinz Gietz left Polydor and switched to Electrola. Some artists - especially those who owe much of their success to his compositional ideas - follow him. This includes Bill Ramsey and Ines Taddio.

"I don't know if this decision was right," she says today, "because the Polydor didn't have a big female star at the time and had a lot to do with me." Nevertheless, it gives priority to further cooperation with Gietz.