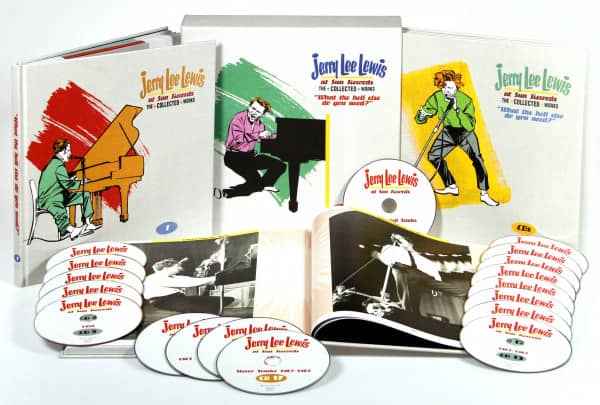 -- This is it! ...... No, really, THIS IS IT!& ,
-- The story began at Sun Records almost 60 years ago. Now EVERY surviving song and EVERY surviving take that Jerry Lee Lewis recorded for Sun is here. All other sets are obsolete!& ,
-- Years of painstaking comparisons and tape vault research!& ,
-- 18 generously full CDs, 623 tracks ... more than 100 previously unheard versions!& ,
-- All mono versions! All stereo versions! All original Sun era overdubs!& ,
-- Two comprehensive hardbound books: one with the discography and commentary, and another of photos, many of them previously unpublished! & ,

These 18 CDs place you in the studio as Jerry Lee Lewis records one epochal session after another for Sun Records between 1956 and 1963. In the history of recorded music, no one created such an incredible and indelible body of work in such a short time. Jerry Lee spanned the breadth of American music: gospel, R&&,B, blues, country, pop, and of course rock ‘n‘ roll. Incredibly, he only recorded one LP during the course of his career at Sun. Another LP mixed some older and some newer recordings, and that was it before Sun was sold. The floodgates opened after the sale in 1969. There have been countless Jerry Lee Lewis anthologies since then—more than anyone could possibly tabulate—many of them drawing on the incredible wealth of unissued songs. But now you can get rid of them all. This is the guaranteed ultimate Jerry Lee Lewis on Sun listening experience. You can hear recordings created in the studio. Some were done in one take. If that’s all it needed, that’s all it took. Some were painstakingly recorded and re-recorded through days and sometimes weeks. It’s all here.& ,

Every complete take, every incomplete take, every piece of chatter. It took two years of analysis to compare all the sources, but now it’s done. And it took years of research to find rare and published photos, and date them properly. Producers: Andrew McRae &&, Pierre Pennone Valeriy 'Valerik' Orlov &&, Willem Moerdijk Mastering: Christian Zwarg Cover Illustration: Reinhard Kleist Layout Mychael Gerstenberger This is the sort of project that only Bear Family delivers. Truly the last word on truly the first name in rock ‘n‘ roll. Original Sun Recordings licensed from Sun Entertainment, Inc.