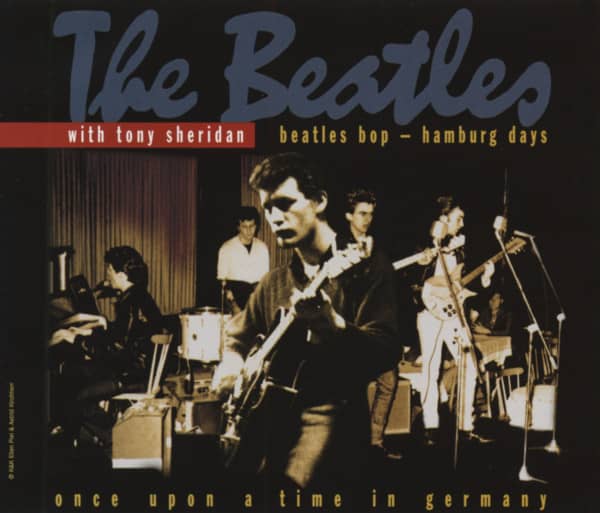 Now this is something special! A true sensation in the history of Beatles reissues! It comes exactly 60 years after the Liverpool foursome -still without Ringo Starr and billed as The Beat Brothers-. issued their first recordings with Tony Sheridan.
Tony Sheridan, a singer-guitarist from Norwich, England, was first among equals (Paul McCartney, John Lennon, George Harrison and drummer Pete Best). He and the group had withstood the rigors of playing up to eight hours per night in Hamburg joints. As John later said, "I grew up in Hamburg, not Liverpool."
Legendary producer Bert Kaempfert recorded the now-famous songs, and they were released on Polydor. They were the earliest commercial recordings by the Beatles, and for four decades the original vinyl releases have been very highly sought-after. Since the dawn of the CD era, the Polydor recordings have been available, but mostly as uninspired 8-song discs with a single piece of coloured paper pretending to be a booklet. No one ever seemed to care about the different versions, and wealth of mixes and variations that existed in several archives around the world.
Following up on an idea by the Hamburg journalist and author Bernd Matheja ('1000 Nadelstiche') and in cooperation with Swedish Beatles specialist Hans Olof Gottfridsson ('The Beatles - From Cavern To Star-Club') Bear Family now proudly presents all available recordings of Tony Sheridan & The Beatles / Beat Brothers. An incredible 38 (!!!) versions from the so-called 'Polydor Years', all lovingly restored from tapes that -in some cases- were considered non-existent or lost. Finally, collectors get stereo and mono, partly overdubbed versions, takes with different lyrics and much more!
But that's not all! There's an incredible book accompanying this milestone release. Very rare documents, single picture sleeves, and rare photos tell the story of these songs, and the four young men from Liverpool, then at the dawn of their careers. Here is one of the building blocks of modern music.
Truly the most exciting event in Beatles archeaology in a long, long time

THE FIRST STAY IN HAMBURG, AUTUMN 1960
For most of the autumn of 1959 the group still known as the Quarry Men or Johnny and the Moondogs included John Lennon, Paul McCartney, and George Harrison, but in January 1960 John's schoolmate at Liverpool College of Art, Stuart Sutcliffe, joined the band, making them a quartet. Sutcliffe was a talented young man, but his talents did not extend to music. He was John's friend, though, and became the bass player.
For John, Paul, George and Stuart the spring and early summer of 1960 were filled with final school exams, a tour of Scotland backing Johnny Gentle, and a rotating cast of drummers. They made plans to become professional musicians after leaving school, and, at the beginning of 1960, they took up John and Stuart Sutcliffe's suggestion that they change their name to the Beatles. Besides Sutcliffe, another new member entered the scene in 1960. It was Pete Best, a drummer hastily recruited for the Beatles' first engagement in Hamburg in August 1960.
The notorious St. Pauli district in Hamburg was a new experience for the five young lads from Liverpool. The city's nightlife and the long hours on stage quickly made them into more accomplished musicians, and more experienced young men. Sutcliffe dubbed his friends, "the great Romeo John Lennon and his two stalwarts, Paul and George", the Casanovas of Hamburg.
The first stay in Hamburg was not a great success. They didn't get along very well with Bruno Koschmider, the manager of the clubs they worked. After a while, they got in trouble with the German Aliens Police due to the fact that George Harrison was underaged and Paul McCartney and Pete Best were accused of setting fire to their quarters. Because of this, they were all, except Stuart Sutcliffe, back home in Liverpool again in time for Christmas. Ironically, Sutcliffe, who had complained in letters that he was tired of the musician's life and seemed the one most eager to return home, was the only one to stay. He had met a German girl by the name of Astrid Kirchherr who became his girlfriend. Astrid was to play her own part in the history of the Beatles, being one of the first photographers to document the group's early years.
ABOUT THE RECORDINGS
The Beatles' first professional recordings were originally made to two-track tape. The music was recorded on one track, and the vocals on another. These were then mixed for release. Unfortunately, the original two-tracks have been lost or recorded-over, and all that remains is a variety of mixdowns, with varying degrees of reverb. These new transfers from those tapes are still clearer than any previous edition of these first Beatles recordings, bringing us closer than ever to those sessions, now forty years old. The reconstruction of who's playing what is based on aural evidence as well as information gathered from record covers, original letters, and old and new interviews with those present. Hans Olof Gottfridsson completed this reconstruction with special assistance from Richard Moore.
IMPORTANT NOTE: Contrary to other published reports, none of the tracks in question were recorded at 'Studio Wandsbek' also known as 'Studio Rahlstedt' ! All 1961 Beatles/Tony Sheridan songs were recorded at Friedrich-Ebert-Halle.
Critics:
This set combines all known recordings in 38 (!) mono and stereo versions. The pieces sound grandiose as never before.' (C.Böhm in Audio 12/01)