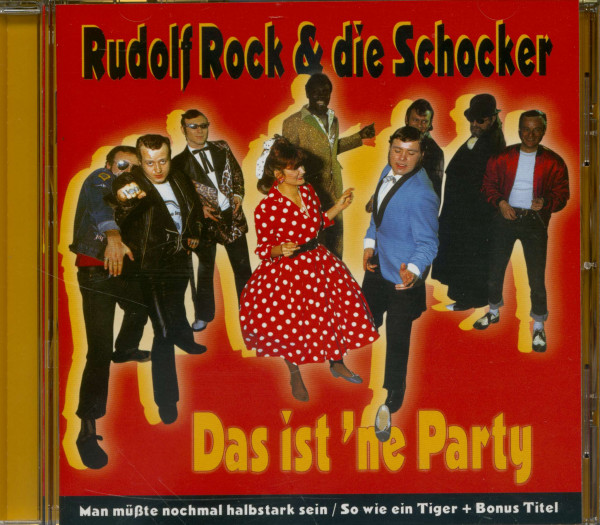 1-CD with 16-page booklet, 25 tracks, duration 79:53 minutes.
Founded in 1976 in Hamburg by Uli Salm alias Rudolf Rock, the fun rock'n' roll formation kicked off a long-lasting rock'n' roll revival with original German lyrics in the style of the 50s and 60s. What was initially intended merely as a gag, was very well received by the audience and the media. Bravo' on March 18, 1976: '...there is an incredibly lively and lively rock'n' roll played, with fabulous solo parts and wonderfully cheesy background choirs. If you're looking for an exciting change to the current disco sound at a party, this LP brings it. And not too close!'
Radio Bremen's'Musikladen' immediately stood on the mat to present this sensational new band to a large TV audience. The'Hamburger Abendblatt' wrote on August 14, 1976:'As soon as the Hamburg band'Rudolf Rock &, Die Schocker' had reached the Bremen music shop under the motto'Der Trommler knock the beat as great - to the good old rock'n' Roll' their performance behind them, the phones at the secretary's office ran hot. Director Mike Leckebusch: "We've never seen anything like it. There was a huge demand for live performances. Over the years, prominent German musicians - sometimes shorter, sometimes longer - have been part of the band's staff.
In 1991 the shockers achieved the greatest success with their crazy and crazy version of the folk music banger Herzilein: the title was in the German charts for 20 weeks, reaching number 12.

Already in Leinemann's time Uli and I had experimented with a colourful rock 'n' roll troupe à la 'Shanana', but didn't get the hang of it. Uli finally came up with the ingenious name 'Rudolf Rock & die Schocker' and the simple yet brilliant idea of trying to parody the repertoire of Peter Kraus, Ted Herold & Co. from the 50s and 60s with German lyrics for a change, which carries a very special kind of humour.

I was gratefully commissioned to write appropriate texts for my own compositions, which were to be based on this zeitgeist. With some top-class friends from the Hamburg scene, Uli immediately set about putting his idea into action. He assigned me as a singer.

As guests: Lonzo (Leinemann), Eckart Hofmann (Faces/Hamburg, Truck Stop), Neil Landon (Fat Mattress) and many others. What was initially intended to be a gag was very well received by the audience and the media.

Bravo' from March 18th, 1976: "...an incredibly lively and lively rock 'n' roll is played, with fabulous solo parts and beautifully kitschy background choirs. If you're looking for a change from the current disco sound at a party, this LP brings it. And not too close!"

The 'Musikladen' of Radio Bremen contacted Uli to sign this new sensational band. "When?" Uli asked. - "In two days," was the answer. Since Rudolf Rock & Die Schocker had only been in the studio so far and the participants had been on the road again with their actual bands, he quickly put together a live formation for the TV appearance and started rehearsing. Two days time!

With Rale Oberpichler (later Paso Doble) and Ingeburg Thomsen, who would go down in Rudolf Rock history as 'Sexy Hexy', 'Rudolf Rock & die Schocker' competed in the 'Musikladen'.

The 'Hamburger Abendblatt' wrote on August 14th, 1976: "As soon as the Hamburg band Rudolf Rock & die Schocker had the motto 'the drummer knocks on the beat like great - to good old Rock 'n' Roll' their performance behind them, the phones at the secretary's office were hot. Director Mike Leckebusch: 'We've never seen anything like it.'" 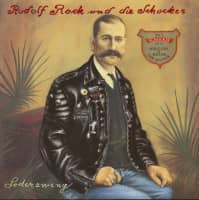 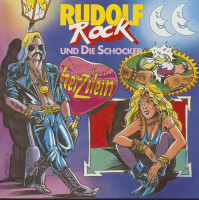