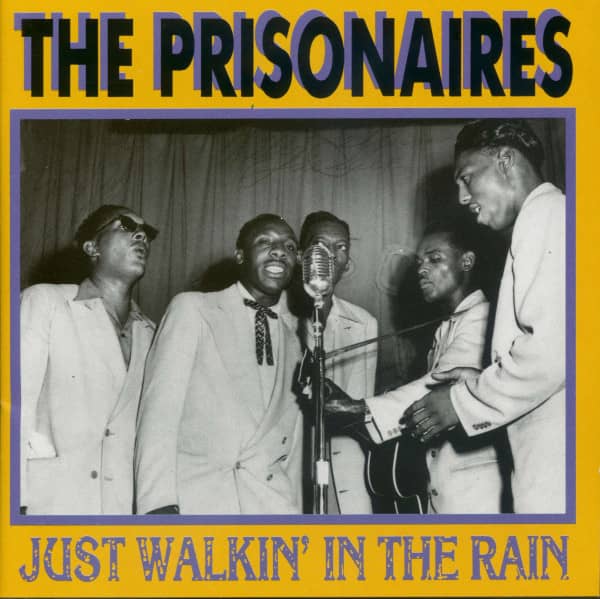 The only major Sun vocal group was a good one. The Prisonaires were five inmates of Tennessee State Penitentiary led by the incredible tenor of Johnny Bragg. This is the first and only complete edition of their work (1953 – 1955), including the original version of Just Walkin' In The Rain (never reissued on CD or LP to this point, an alternate version was always used) as well as harmony classics like

That Chick's Too Young To Fry, Softly And Tenderly, A Prisoner's Prayer, Don't Say Tomorrow, and Rockin' Horse. All told, 26 tracks and an incredible booklet featuring photos from Johnny Bragg's personal album.
Early in the morning of June 1, 1953 a prison bus from the Tennessee State Penitentiary in Nashville rumbled down old Highway 70 towards Memphis. It held five convicts, an armed guard and a trusty. The five convicts had formed themselves into a singing group called 'The Prisonaires', and they were getting unaccustomed exposure to the outside world. "Gee look at that funny cemetery," said lead singer Johnny Bragg, as they passed an empty drive-in movie theatre.

At 10:30am, they grouped themselves around a microphone at the Sun Records studio, at the junction of Union and Marshall Avenues in Memphis. The guard and the trusty went next door to Taylor's Restaurant, and the group tried to get a recording balance for Sun Records' owner, Sam Phillips. They sang in the sweet close harmony style for which Phillips had little affection, so he called over to local bottling and vending don, Drew Canale, and asked if his houseboy, Joe Hill Louis, could come down and sit in on guitar. Louis's music was at the polar op-posite extreme of black music: raw, unsophisticated and bluesy. "You guys are good," said Louis to Bragg, "but you've got to stick together." Bragg replied that, with three of the group in for 99 years, there was not much chance of doing otherwise.

They worked on two songs until 8:30pm. Louis gave a hard, bluesy edge to one of the songs, Baby Please - for which he was paid $10.00, but the group per-suaded Phillips to make Louis sit out the other song, Just Walking In The Rain. Phillips saw potential in Baby Please, but Bragg and the other group members knew that Just Walking In The Rain held something special. They didn't want its poignancy destroyed by Louis's rough-hewn guitar licks.

That much we know for certain. Most of it was reported the next day by Clark Porteous in the 'Memphis Commercial Appeal'. Porteous made no mention of another visitor to the session, whom Bragg remembers clearly. "I had problems with my phrasing," recalled Bragg, "and this kid with dirty clothes was standing around. He said, 1 can he' p him, Mr. Phillips,' and Sam got mad. He said, 'Boy, didn' t I tell you to stay outta here. These men are prisoners. You could get me in a mess of trouble'. I said, 'Mr. Phillips, ain't nobody been able to help me get my wording right yet, why don't you let him try' . Sam got disgusted, but he said OK. The other guys went next door and we worked on it some, and when they came back, we got it on the first cut."

According to Bragg, that visitor, was Elvis Presley. If so, it means he was hang-ing around the studio a year before his first record was cut, which invites a minor re-write of history. True or not, though, the Prisonaires story bisects the Presley story at various odd tangents.

Bragg was indisputably right about one thing. Just Walking In The Rain was the side to watch. To Phillips' surprise, it started breaking through in several major markets just weeks after release. National magazines latched onto the novelty slant, and the Prisonaires started to bask in their fifteen minutes of fame. Their story, as told at the time, and as subsequently recounted by Johnny Bragg (now the sole survivor of the group), goes as follows:

According to prison records, Bragg was a badass kid, born in Nashville on January 18, 1926, and jailed on May 8, 1943 on six counts of rape. According to Bragg, he was born on May 5, 1929 (the earlier date is his brother's birthdate, which he used because the City had no trace of his own birth), and the prison term was the result of a frame-up and terrible misunderstanding.

"My troubles started when I was twelve years old," said Bragg cagily. "My friend was dating my girlfriend, we got to fighting, and she said I tried to rape her. While they had me, they put all these unsolved cases on me, told the peoples! was the one. Later some of them said they was wrong, and wanted to clear their consciences before they died. A lady goes to my church, and she shakes her head and says, 'We sure didyouwrong,John; "

Learn more about PRISONAIRES
The Prisonaires A ccording to prison records, Johnny Bragg was a badass kid, born in... more
Close menu
"PRISONAIRES" 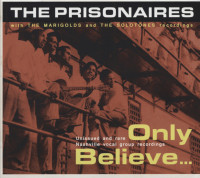