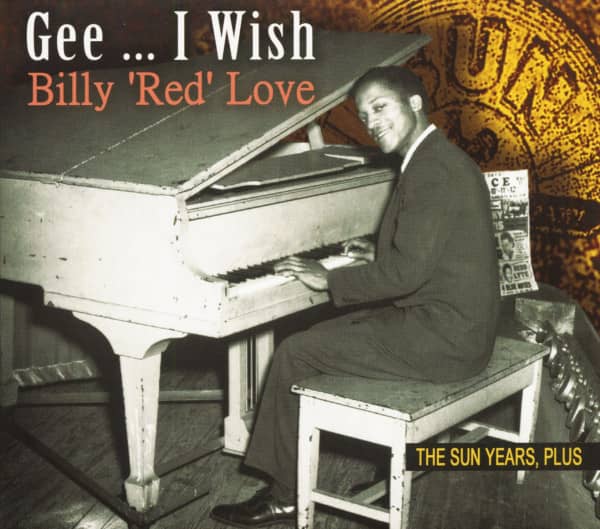 A landmark first CD reissue of one of the best... but least known... R&B singer-pianists from Memphis! Twenty six high class boogie, blues and R&B sides recorded between 1951 and 1954 by Sam Phillips at Sun Records! Includes all 4 Billy 'Red' Love sides recorded by Sun and issued by Chess Records in 1951 and '52 including the extremely rare, never before reissued - My Teddy Bear Baby/Poor Man ! Few collectors have even SEEN this record! Includes Love's classic recording of Juiced, issued under the name of Jackie Brenston as the follow up to Rocket 88, plus both sides of the Sun single that never was -
Hey Now/Way After Midnight. Includes the rare promotional disc for Hart's Bakery in Memphis - Hart's Bread Boogie ! 10 tracks not originally issued in the 1950s and 10 more tracks issued here for the first time! Features the cream of Memphis R&B musicians. The booklet by Martin Hawkins contains the first ever biography of Love's unusual career and amazing life. Rare photographs including the first ever solo shot of
Billy 'Red' Love!

Bear Family has carved out an amazing niche: issuing CDs by Sun Records artists who didn't record enough for Sun to fill a CD. Bear Family looks high and low for other recordings, rarities, and test pressings... all the stuff collectors love! This time, it's Billy 'Red' Love, and his story fills a void in the story of Memphis music. Billy 'Red' Love was Sun's R&B session pianist and led Rosco Gordon's road band for some years. In and out of the forces, in and out of employment, in and out of jazz clubs, and in and out of the attention of law enforcement officers, Billy 'Red' Love led a full, short, frustrating and strange life. But in his singing, songwriting, arranging and piano playing he was up there with the best. This CD tells it all! 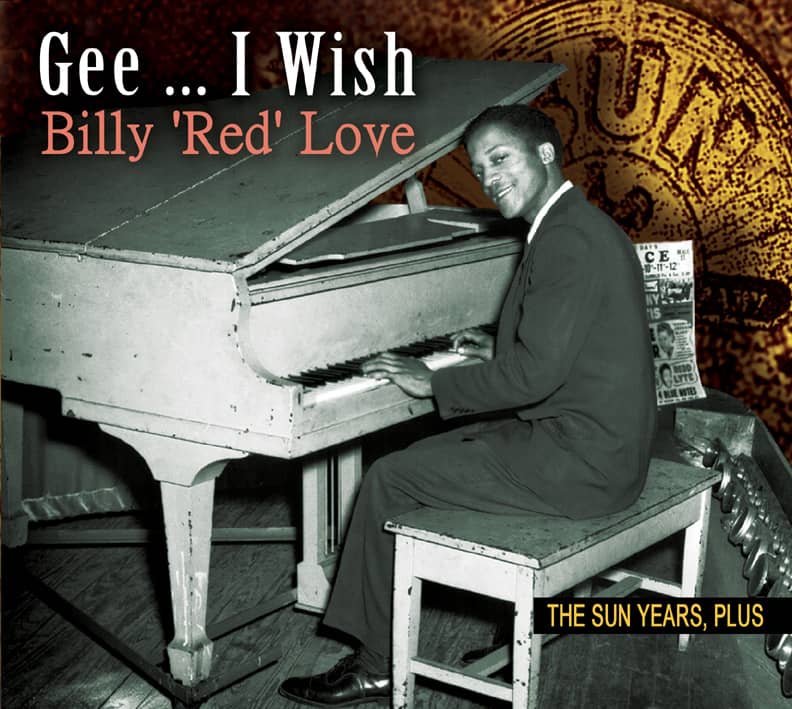 This CD contains all the known recordings of Billy 'Red' Love, 26 high class boogie, blues, and R&B sides recorded between 1951 and 1954 by Sam Phillips at the Memphis Recording Service, 706 Union Avenue, Memphis, Tennessee. It is an important first CD reissue of one of the best but least celebrated R&B singers and pianists in Memphis R&B; it fills a void in the story of Memphis music. Billy Love was a massive talent, becoming the Sun label's best session pianist in black music and the leader of Rosco Gordon's road band for some years. But he spent his life in and out of the armed forces, in and out of employment, in and out of jazz clubs, and in and out of the attention of law enforcement officers. Billy Love led a full, short, frustrating and strange life.

His music was not strange though. In his singing, song writing, arranging and piano playing he was up there with the best. Here are all four Billy 'Red' Love sides issued by Chess Records in 1952 including the extreme rarity Chess 1516, never before reissued – My Teddy Bear Baby and Poor Man. Here too are Love's classic recordings of Juiced - issued by Chess under the name of Jackie Brenston as a follow up to the big hit Rocket 88 - and Hey Now and Way After Midnight, the two sides of a Sun Records disc that never was. There is a rare promotional recording for Hart's bakery in Memphis – Hart's Bread Boogie, and in all there are ten tracks not originally issued in the '50s and ten more tracks issued here for the first time.  Love's recordings feature the cream of Memphis R&B musicians too, including Phineas Newborn senior, Calvin Newborn, Richard Sanders, Tuff Green, Willie Wilkes, Harvey Simmons, and blues guitarist Pat Hare.

The origins of this CD came in a conversation with Dave Sax about musicians like Billy Love who recorded with Rufus Thomas (see Bear Family, BCD 16695). Dave reminded me about the extremely rare Chess disc of My Teddy Bear Baby, and I realised that although I had issued some of Billy Love's recordings on compilation LPs back in the 1970s, there had never been a full-scale CD celebrating the music of this fine but mysterious and little-acknowledged artist. Most record companies would have recoiled from the idea of a full CD but Richard Weize said, "Billy Love – of course we must do it" . Then came the hard part; finding decent sources for all the music. And then the really hard part; finding out something – anything – about Billy 'Red' Love.

Until now Billy 'Red' Love was a name on a record label, a name in a recording company's files, someone several of his contemporary musicians remembered – but the information, though intriguing, was sparse at best and contradictory at worst. Billy Love was never featured in any music publications or promotional blurbs, and he was never interviewed.

According to the labels of his recordings issued by Chess Records of Chicago in 1952, the man we are listening to on this CD was Billy 'Red' Love. According to the files kept between 1951 and 1954 by Sam Phillips and Marion Keisker at the Memphis Recording Service, where Love made all his known recordings, his real name was Milton Billy Love. But Love is quite a familiar surname in and around Memphis and parts of Mississippi, in both the black community and the white, and it was not immediately clear and straightforward whether we should be looking to trace a man named Billy or William or Milton.

In the official registers of births, no-one named Billy or William seemed to fit the bill. A little research soon revealed that our man was not the same Billy Love who was famous around Greenville, Mississippi, for buying and selling cotton. Equally he was not the same Milton Love who recorded as lead singer of The Solitaires for Old Town Records in New York in the mid-'50s. Some contemporaries and writers have confused him with Willie Love, another blues pianist and singer associated with Trumpet Records in Jackson, Mississippi.  Others have speculated some connection with harmonica player Coy Love but research along those lines led to nothing. Eventually, it became possible to identify our man through the records of the U S Army; these revealed that he was named Milton Love and that he had first signed on for the Army in 1946 in Memphis. With that information, it was possible to find his July 1944 application for a social security number – and there it finally transpired that his real full name was Milton Morse Love junior.

Milton Morse Love (aka Billy 'Red' Love) was born on 8 December 1929 in Memphis, the son of Morse Love and Lizzie Elliott. They were living on Florida Street just south of downtown Memphis in the summer of '44 when Milton was fourteen years old and commencing work at the St Louis Warehouse in Memphis.

It has not been possible to trace the records of Milton's parents with any degree of certainty. There are no records relating to the birth, marriage or death of his father, Morse Love. It is just possible that the official who filled out Milton's social security documentation misheard the name and that 'Morse' was really 'Morris' Love. In that case there was a 23 year old Morris Love living on Alston Street, Memphis in 1920 and working as a wholesale grocery porter. He just possibly could have been Milton's father. There are a number of Lizzie Elliotts who may have been Milton's mother, but there is no trace of a marriage registration for the couple. Lizzie Elliott may have become Lizzie Love but Milton's social security forms just record her maiden name. There was a Lizzie Elliott living with her husband on Pauline Street, aged 21 in 1930, but this is unlikely to have been Milton's mother as there is no link to anyone named Love. There was a tenant farmer named William M Love and his wife Lizzie living on the outside of Memphis in 1930 who, from their ages at the time, could have been Milton’s grandparents and if the ‘M’ stood for Morse or Morris they could have been the ones who featured on the social security forms rather than Milton’s parents. The possibilities are numerous, and unresolved.

Consequently, we know nothing of Milton's first fourteen years of life in Memphis or when the family moved to Florida Street. Another singer and pianist, Rosco Gordon, lived on Florida Street off and on and in 1944 he hopped a freight train to Chicago with friends, telling interviewer John Floyd: "I left home at twelve, so as for a childhood I didn't have much. I went to Tinley Park, Illinois. They had a job offer on one of the railroads”. It is just possible, but unlikely, that Milton Love was involved in this or other adventures with Rosco. Milton's known route out of Memphis was a different one, however: he signed on for the US Army on 2 February 1946. He was 16 years old but he needed to be 17 to be taken on, so he apparently told the Army recruiters he was born on 24 January 1929.

By the late '40s Milton was back in Memphis, living again on Florida Street. By now he had taken up the piano and was gaining a good reputation locally both as a player and as a teacher. It was then that he met a budding saxophonist named Richard Sanders with whom he would form a band. Sanders's sister, Lillie, told me about her family's life on Florida near Milton Love and Rosco Gordon: "We were reared up in Mississippi around the Stuckey Quarters in Yazoo County in Bentonia, and around the family and friends of musicians. My cousin was Skip James, my great uncle was Henry Stuckey, and along with some of their friends like Sonny Boy Williamson, my older brother 'Baby Richard' Sanders junior used to play blues music from dusk to dawn on our front porch when I was growing up. My grandmother's maiden name is Emma Stuckey and she married a Thompson.  My mother's maiden name is Lillie Thompson and she married my father Richard Sanders, senior. My parents moved us to Memphis at 1675 Florida Street during my young school years.  Around the year of 1948 through 1951 musicians including Johnny Ace, Billy 'Red' Love, Earl Forest, Little Milton and Rosco Gordon used to rehearse almost every day at Rosco Gordon's family home across the street from my family home. While walking home from school daily, I had the opportunity to hear great sounds of blues singing and music".

Lillie Sanders-Jubirt has long remembered both the music she heard at her brother’s rehearsal sessions in those days and one in particular of the musicians who made it, saying: "Years later my daughters formed a singing group called the Jubirt Sisters and with the history and strong sounds of blues embedded in my family, my daughters asked me what type of blues music did I enjoy listening to? I immediately replied, 'Girls, this fair-skinned, freckled-faced, slender-framed, handsome blues singer from across the street used to whistle and wink his eyes at me every time he'd see me.' He was Billy 'Red' Love. He seemed to be a nice, quiet and very mannerable person. During that time, I was young and in school, and I was very very shy, but also told I was very attractive. I'd blush each time he'd make a move on me. Of course I'd smile and gracefully walk away each time Billy Love whistled at me or attempted to approach me – but I never forgot the music he'd sing."

The music Milton Love was singing and playing in the late '40s is a matter for conjecture, as is the time and reasoning for his switch of name to 'Billy'. The nickname 'Red' seems an obvious one given the description of his features. We don't know whether he had any formal training on piano or what his basic influences were. The likelihood is that he took in a range of music from swing jazz and popular through to boogie-woogie, bebop and R&B.