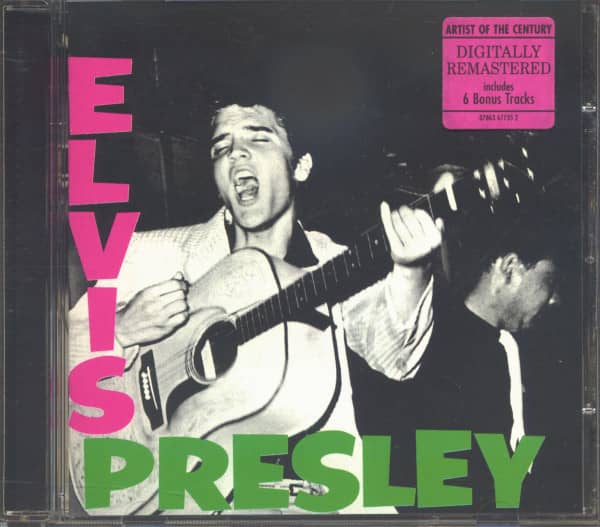 (1999/BMG) 18 tracks - Original 1956 album remastered plus 6 bonus tracks! Elvis' earliest RCA sessions in January 1956 gave producer Steve Sholes one mega hit single, 'Heartbreak Hotel,' and as many as ten songs that he considered unsuitable for future singles. Elvis was recording for RCA in the same manner as he'd recorded for Sun. He was trying this, trying that, playing favorites. The norm for country sessions in those days was four songs in three hours, but Sholes. who was not only the producer but the manager of RCA's country division, had shrewdness enough to know that he shouldn't try to fit Elvis into that straitjacket. He also had the foresight to plan an album before it became clear that 'Heartbreak Hotel' would be a mega hit.
Six months before Shales had acquired Elvis' contract from Sun for RCA. he had purchased Jim Reeves' contract without acquiring his old masters. This proved to be a mistake when old recordings began appearing in competition with his new RCA recordings. So, when Sholes acquired Elvis' contract from Sun, he insisted that the back catalog be part of the deal. This gave him almost 20 more recordings. By the end of January 1956 then, Sholes had stockpiled almost enough recordings for two albums without even knowing that 'Heartbreak Hotel' would be a hit. In fact, the betting around RCA was that it wouldn't.
'Heartbreak Hotel' was released on January 27, and there were five agonizing weeks before it charted. By then, Sholes had the first album ready. It's true that the last Sun single, 'I Forgot To Remember To Forget,' had just vacated the No.1 spot in the Country charts, but the record business, particularly the Country record business, was still singles-driven, and it was almost unheard-of for an artist with two Country hits and no Pop hits to have an album. Although this album appeared just as 'Heartbreak Hotel' was charting, it included neither 'I Forgot To Remember To Forget' nor 'Heartbreak Hotel.' Perhaps it was RCA's lack of faith in 'Heartbreak Hotel' that led Sholes to omit it, perhaps it went hand-in-hand with the prevailing philosophy that saw singles and albums as completely separate entities.
ELVIS PRESLEY almost perfectly mirrored Elvis' taste. Only Gospel music went unrepresented. There were current Rock'n'Roll-Rockabilly hits and almost-current Rock'n'Roll-Rockabilly hits ('Blue Suede Shoes,' 'Tutti Frutti'), R&B classics ('I Got A Woman,' 'Money Honey,' 'I'm Gonna Sit Right Down And Cry (Over You),' Country standards ('I Love You Because,' 'Just Because'), Pop standards ('Blue Moon'), original songs submitted before the sessions ('I'm Counting On You,' 'One-Sided Love Affair'), and wholly obscure songs that Elvis plucked from his vast reliquary. The latter included a
sentimental Country ballad with a bluesy Rockabilly ending, 'I'll Never Let You Go (Little Darlin'),' that Jimmy Wakely had written for Gene Autry in 1941, and 'Trying To Get To You,' a fleeting 1954 R&B hit for a Washington, D.C.-based R&B vocal group, The Eagles. Five of the songs, 'Blue Moon,' 'Trying To Get To You,' 'I Love You Because,' 'I'll Never Let You Go,' and 'Just Because,' were unreleased Sun recordings.
Those 12 original titles are now joined by Elvis' then-current hits, 'I Forgot To Remember To Forget' and 'Heartbreak Hotel' b/w 'I Was The One,' and three other songs from those January 1956 sessions. 'My Baby Left Me' was a mellow, rural Arthur 'Big Boy' Crudup Blues bopper from 1950. Elvis' twitchy energy transforms it into a sweet postscript to his Sun recordings - pure Rockabilly! 'Shake, Rattle, And Roll' and 'Lawdy, Miss Clawdy' had been early fifties R&B-Rock'n'Roll hits for Big Joe Turner (and of course Bill Haley) and Lloyd Price respectively. 'We didn't have any new material that suited Elvis.' Sholes wrote to Colonel Parker after the session, 'so we recorded 'Lawdy, Miss Clawdy' and 'Shake. Rattle And Roll.' Neither of the two will be suitable for single release, but I know they will make good selections for the second album.' Incredibly, Sholes was already thinking of the second album a month before 'Heartbreak Hotel' charted. Elvis' sound would change over the next few months, though, prompting Sholes to call for all-new recordings on the second album.
In June, 'Shake, Rattle, And Roll' and 'Lawdy, Miss Clawdy' were released on an EP.
The cover shot, taken when Elvis appeared at the Fort Homer Hesterly Armory on January 31, 1955, was the work of Tampa photographers Robertson & Fresh. It was tightly cropped and bled to the margins of the album jacket for maximum impact. In some respects, it was a far from flattering portrait, but its vigor made it the herald of a new day. The color mix of black, white, pink and green was almost punk before punk. Nothing comparable had been seen on RCA, or any other label. It became RCA's first pop album to do a million dollars' worth of business.
Its 10 weeks atop the album charts made it the first rock 'n' roll album to reach No. 1. Elvis' achievement during those early months of 1956 has been analyzed and dissected to the point that it is almost taken for granted. but the power and immediacy of this first album remain undimmed.
COLIN ESCOTT
Thanks to Ernst Jorgensen's Elvis Presley: A Life in Music--The Complete Recording Sessions (St. Martin's Press).

(January 8, 1935, Tupelo, MS – August 16, 1977, Memphis, TN)
Elvis Presley (full name Elvis Aaron Presley) is the most outstanding personality in showbiz ever since, and the most popular entertainer the world has ever seen! His musical influence within music history and its following generations of musicians is still unbroken. His huge 'Blast-Off' in the mid-1950s, the rising star from a simply called 'Hillbilly Cat' (at Sun Records) to a lascivious Rock'n'Roll singer with charisma, a male sex symbol (then at RCA Victor) soon popularized him as "The King of Rock'n'Roll" or simply "The King".
His first cut within his tremendous career happened between October 1958 and March 1960 while Elvis was on duty with the U.S. Army and stationed in Germany. It was there in 1959 when he met his later wife Priscilla Beaulieu at age 14. Elvis and Priscilla married on May 1, 1967 in Las Vegas (divorce in 1973). Elvis evolved into an all-around entertainer after his Army service and started starring in Hollywood films. 33 movies in total, including the two concert documentaries 'That's The Way It Is' and 'On Tour'. He again shook the world with his 1968 NBC Comeback TV Special after his movie period without any stage appearances.
This TV special included the first ever unplugged session presented together with musicians from the early days such as Scotty Moore and D.J. Fontana. 1973 saw THE TV mega event at all: Elvis Presley, 'Aloha From Hawaii via Satellite'! Elvis' Honolulu appearance, the first time that a show was broadcasted worldwide via satellite! He was ahead of his time! Elvis Presley had 148 US single chart hits, including some so-called double-sider when A- and B-side both hit the charts like his 1956 smash 'Don't Be Cruel b/w Hound Dog', plus 15 EP hits between 1956 and 1977. Two billion of sold media and sound carriers by Elvis Presley is the estimated number! He received 14 Grammy nominations until 1978 and three Grammy for his Gospel interpretations. Elvis was the youngest artist when honored with the Bing Crosby Award (Lifetime Achivement Award) in 1971.
He is presented in 5 Halls of Fame (Rock'n'Roll, Rockabilly, Country, Blues and Gospel). Six of his song interpretations are collected in the Grammy Hall of Fame. On top of it all Elvis Presley got the most gold and platinum records and a Diamond-Award. He definetly is the 'Best selling solo artist in U.S. History' (RIAA – Record Industry Association of America)! Elvis Presley CD albums, vinyl records as LPs or singles at 45rpm - Bear Family offers a huge number of various Elvis Presley CDs, vinyl-LPs and 45rpm singles, vinyl- and CD box sets, books and mags, DVDs, unique and extraordinairy memorabilia! Let's say it in the words of one of Elvis sixties album title: There is "Something For Everybody"! And hey, you name it! Elvis Presley is the King of Rock'n'Roll, the biggest icon in showbusiness, and a great person who lives on forever!
Bear Family Records treats his legacy with the most respect and an optimum capacity of expert knowledge.
Review 0
Read, write and discuss reviews... more
Close menu
Customer evaluation for "Elvis Presley (CD, EU Version)"
Write an evaluation
Evaluations will be activated after verification.
Weitere Artikel von Elvis Presley
Elvis Presley: American Sound 1969 (5-CD) Art-Nr.: CD975140