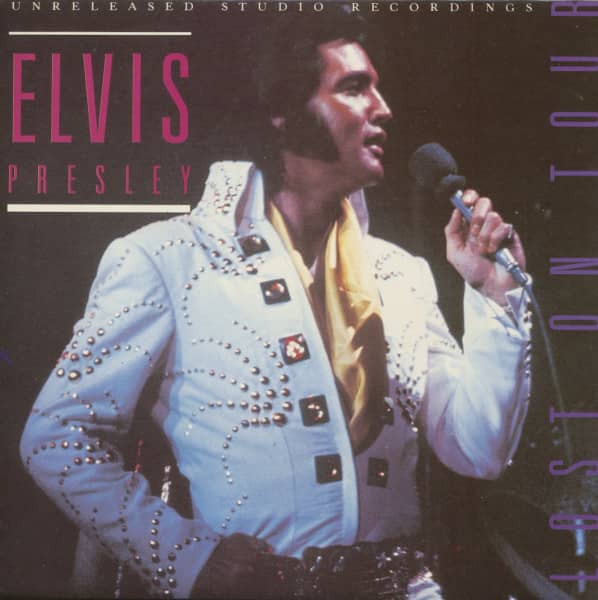 (Bilko) 8 tracks - unreleased studio recordings
Liner Notes:
The unique recordings presented here for the very first time were made on March 30, 1972, one day after the end of the 'official' re-cording sessions which took place from march 27-29. The March session was filmed by MGM primarily so that part of it could be included in the ON TOUR documentary, which eventually featured both `Seperate Ways' and 'Always On My Mind'. It appears, therefore that these two songs also originated from this 'unofficial' session. This is not so surprising, as neither Elvis nor his musicians would have enjoyed the constant buzzing of cameras while laying down the goods for future records releases.

The takes featured on this new Bilko release are the result of many hours of painstaking editing. The rough unedited material originated from a MGM working tape a cue tape as it is known to insiders. On the unedited tape constant interruptions and directions from the filmdirector to his camera-crew can be heard over Elvis' singing. Because of this several takes of the featured songs had to left lying in the cutting-room. However, what was left and fit for release in an Elvis collectors dream come true. With the exception of 'A Big Hunk 0' Love' all the takes presented here are without any of the distracting comments made by the filmdirector and his crew.

In order to edit out all the bad parts we have sometimes had to leave out a few bars of an intro as- well. Such is the case with the piano intro to take 1 of Tor The Good Times', which has Elvis jokingly singing 'Don't look so bad, put on some make-up'. Before this we only had a 'live' version, recorded at Madison Square Garden. The studio version is remarkably different! On the first take Elvis sings solo while on the next, incomplete, take Charlie Hodge joins in to sing some harmony parts. `Lead Me, Guide Me' is very close to the version which can be heard and seen in ON TOUR. The Stamps are joined by Elvis on 'Sweet, Sweet Spi-rit' . Elvis then sings lead vocals on the beautiful gospel song 'Nearer My God, To Thee', never heard performed by Elvis before! After the gospel-jam it's time for some down to earth rock 'n roll when Elvis and the band attack 'Burning Love' .

Not as tight as the hit-single version recorded on March 28, but still a great track ending in a long 'hunka-hunka-Burning Love' finale. From the fast-paced 'Burning Love' it's back to the third and final take of Tor The Good Times' . A complete version, in which Elvis is once again accompanied by Hodge for the harmony. This is followed by Elvis fool-ing around with a few lines of the Marty Robbins Country classic Thl Paso' . The final two songs on this release were performed during most of the concerts from '72 and onwards. `A Big Hunk 0' Love' (take 1) is pure dynamite with James Burton show-ing once again why he is called the greatest rock 'n roll guitar picker around.

Eat your heart out, Chuck! `You're on your own Ronnie', Elvis comments, and a heavy drum-roll introduces 'See See Rider', a delivery as tight as Elvis' 68 leather suit! No horns on this take, just The Man and his band cookin' it up! During a session-break Elvis sat down for a quiet conversation with the filmdirector and a member of the Stamps. What followed was one of the very few occasions Elvis talked about his musical roots and gospel music in particular, a fitting conclusion to a fine piece of Presleyana.
The Sergeant

(January 8, 1935, Tupelo, MS – August 16, 1977, Memphis, TN)
Elvis Presley (full name Elvis Aaron Presley) is the most outstanding personality in showbiz ever since, and the most popular entertainer the world has ever seen! His musical influence within music history and its following generations of musicians is still unbroken. His huge 'Blast-Off' in the mid-1950s, the rising star from a simply called 'Hillbilly Cat' (at Sun Records) to a lascivious Rock'n'Roll singer with charisma, a male sex symbol (then at RCA Victor) soon popularized him as "The King of Rock'n'Roll" or simply "The King".
His first cut within his tremendous career happened between October 1958 and March 1960 while Elvis was on duty with the U.S. Army and stationed in Germany. It was there in 1959 when he met his later wife Priscilla Beaulieu at age 14. Elvis and Priscilla married on May 1, 1967 in Las Vegas (divorce in 1973). Elvis evolved into an all-around entertainer after his Army service and started starring in Hollywood films. 33 movies in total, including the two concert documentaries 'That's The Way It Is' and 'On Tour'. He again shook the world with his 1968 NBC Comeback TV Special after his movie period without any stage appearances.
This TV special included the first ever unplugged session presented together with musicians from the early days such as Scotty Moore and D.J. Fontana. 1973 saw THE TV mega event at all: Elvis Presley, 'Aloha From Hawaii via Satellite'! Elvis' Honolulu appearance, the first time that a show was broadcasted worldwide via satellite! He was ahead of his time! Elvis Presley had 148 US single chart hits, including some so-called double-sider when A- and B-side both hit the charts like his 1956 smash 'Don't Be Cruel b/w Hound Dog', plus 15 EP hits between 1956 and 1977. Two billion of sold media and sound carriers by Elvis Presley is the estimated number! He received 14 Grammy nominations until 1978 and three Grammy for his Gospel interpretations. Elvis was the youngest artist when honored with the Bing Crosby Award (Lifetime Achivement Award) in 1971.
He is presented in 5 Halls of Fame (Rock'n'Roll, Rockabilly, Country, Blues and Gospel). Six of his song interpretations are collected in the Grammy Hall of Fame. On top of it all Elvis Presley got the most gold and platinum records and a Diamond-Award. He definetly is the 'Best selling solo artist in U.S. History' (RIAA – Record Industry Association of America)! Elvis Presley CD albums, vinyl records as LPs or singles at 45rpm - Bear Family offers a huge number of various Elvis Presley CDs, vinyl-LPs and 45rpm singles, vinyl- and CD box sets, books and mags, DVDs, unique and extraordinairy memorabilia! Let's say it in the words of one of Elvis sixties album title: There is "Something For Everybody"! And hey, you name it! Elvis Presley is the King of Rock'n'Roll, the biggest icon in showbusiness, and a great person who lives on forever!
Bear Family Records treats his legacy with the most respect and an optimum capacity of expert knowledge.
Review 1
Read, write and discuss reviews... more
Close menu
Customer evaluation for "Lost On Tour (LP)"
From: Steve Clements On: 20 Aug 2020

Received this item in the Uk within 5 days of order. The vinyl & sleeve was in mint condition & Bear family records were excellent from start to finidh, great communication, top service. I will be ordering more from this site.