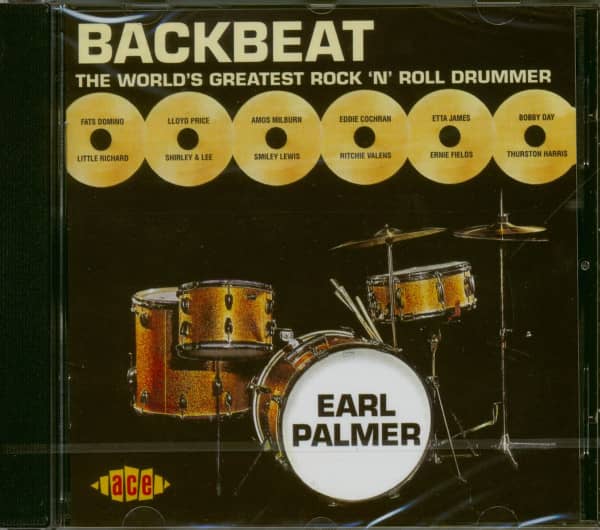 (ACE Records) 30 tracks
Earl Palmer not only shared the same hallowed initials as Elvis Presley but also contributed enormously to the mainframe of first generation rock'n'roll music. His roots stretch back so far, that before Earl mobilised a snare alongside a kick drum and added cymbals and a top kit, there really wasn't such a thing as a drum set to play his kind of music on. Earl developed his love of infectious rhythms when he trod the boards as a child dancer, working with all facets of local life in New Orleans, ranging from a featured spot in a blues revue to stooging for Louis Prima.
After serving his time in the military (which included a run-in with the Home Guard in Southern England!), Earl returned to the Crescent City where he was hired to play drums in the prestigious Dave Bartholomew Band. It was a case of being in the right place at the right time as the post war R&B boom was just getting underway and the regional recording scene was beckoning in all directions.
The ball started rolling in 1949 when he played on Fats Domino's debut hit, The Fat Man, and from thereon the phone was ringing off the hook. Helped to implement the house band at Cosimo Matassa's jam studio and when Little Richard came to town to record Tutti Frutti. It seemed the whole world wanted the powerful Palmer backbeat. After a move to LA in 1957, he took a producer's gig at Aladdin Records and worked his magic on some classic recordings by Shirley & Lee, Big T Tyler and Thurston Harris.
His workload expanded to four sessions a day, seven days a week and could range from a Sinatra date to a Flintstones' cartoon soundtrack. However, it is his stellar work on the best recordings of the likes of Eddie Cochran, Bobby Day and Jesse James that sets the seal on his talents, released as an essential companion to his newly-published autobiography, "Backbeat", this 30-tracker fully illustrates the remarkable Earl Palmer story.
By Stuart Coleman

Earl Palmer. Born in New Orleans in 1925, his career as a drummer literally spans the entire history of rock. As a child during the Thirties, he tap-danced on his parents' vaudeville shows and played toy drums in local street groups. Aftei leaving the .US Army in 1945, Palmer sought a new voca-tion in drumming and joined Dave Bartholomew's band which backed Fats Domino, Little Richard, Shirley and Lee and a host of other R&B artists on record sessions during the mid-Fifties.

Leaving New Orleans in 1957, Palmer wens to work as an A&R man for Aladdin in Los Angeles, bul soon reverted to session drumming for Larry Williams, Dor and Dewey, Bobby Vee, Eddie Cochran and countless others. He remains one of LA's foremost sessions musicians