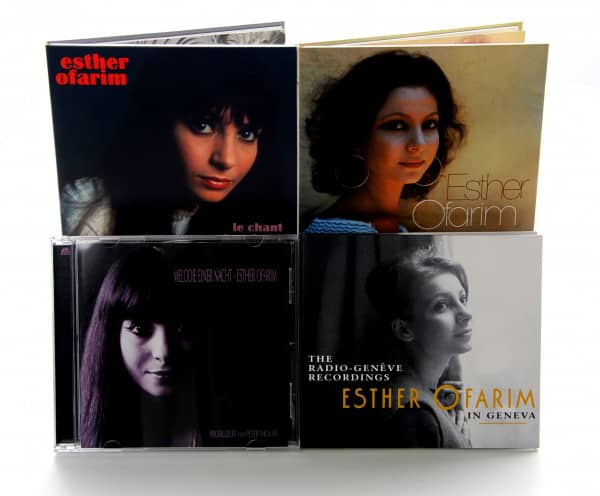 4 CDs for a special price as a bundle

Saturday, March 23, 1963: The BBC hosts the ninth 'Grand Prix Eurovision' at its London Television Center and simultaneously broadcasts the music competition to the continent. This time, the singers who have traveled to the continent are competing for 16 European countries. The Federal Republic of Germany has sent Heidi Brühl into the race, the Principality of Monaco the Frenchwoman Françoise Hardy, Luxembourg the Greek Nana Mouskouri , and the Swiss want to win the Eurovision contest on this day with the Israeli Esther Ofarim.

For the first time on CD - her 1973 album. This compilation by Esther Ofarim comes with five bonus tracks and contains previously unreleased titles. The booklet foreword was written by the legendary French lyricist Boris Bergman.

A reunion with a cult star, the rare album from 1972 finally available: timeless songs in different languages.  New albums by Esther Ofarim are rare. And reissues of her strongest recordings even rarer. Already active since the sixties, the great artist Esther Ofarim has recorded many hits as a soloist and with her longtime partner Abi Ofarim, becoming a worldwide celebrated cult star from Israel.  In addition to these successes, however, Esther Ofarim with her unmistakable voice has repeatedly recorded albums whose quality is outstanding, but which never gained the attention they deserved from a wider audience.  These include, above all, 'Esther' (misleading alternative title: 'First Album') from 1972.

Exclusively previously unreleased songs and alternative studio recordings, all made available for the first time. Songs from all of their festival appearances, including Israel 1961 (an alternate version of Sa'eni Imcha Bemachol), Sopot 1962 (alternate recordings of Stav and Dumam), Chansons Sur Mesure 1963 (very rare recording of Saint-Amour), and Eurovision 1963 (alternate version of their hit T'en va pas). Rare photos from that period. An exclusive essay with memories of Esther Ofarim about her time in Geneva.