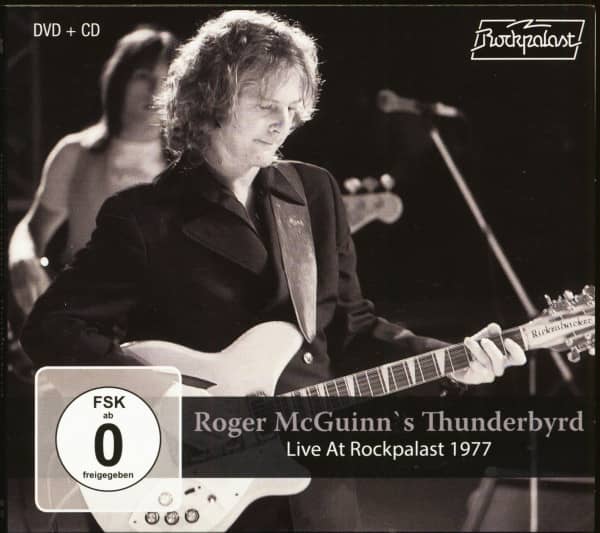 And then - deep in the night - the brilliant concert of Roger McGuinn's Thunderbyrd. With his twelve-string Rickenbacker-guitar - the Bund notched by many Dylan-plays in D - he brought the "Jingle, Jangle" - sound of the Byrds to the stage of the Grugahalle. With Roger McGuinn, a musical legend entered the Rockpalast stage. Reminiscences of the Byrds, which he had co-founded, were awakened, of the three-part vocal harmonies of this group, which some saw as "the American answer to the Beatles"
The legendary first Rockpalast night from the Grugahalle in Essen on 23 July 1977 made rock history. Before Roger McGuinn entered the stage with his Thunderbyrds as the top act of the night, Rory Gallagher and Little Feat had already completely cleared the stage and rocked the Grugahalle. The Thunderbyrds had their first and only album on the market. The line-up of the band was superb next to McGuinn: Rick Vito (lead-guitar, back- and lead vocals) came from John Mayall and was exactly one decade later a member of Fleetwood Mac for four years, Charlie Harrison (bass and background-vocals) was previously a member of the progressive rockers of Judas Jump and Tundra and later joined the West Coast legend Poco and Greg Thomas played drums in front of the Thunderbyrds and the Thunderbyrds. a. Loudon Wainwright III, Seals & Crofts and Leon Russell
A perfectly played band, which challenged their boss Roger McGuinn ("Pick it up McGuinn!!!!") many times to top performances. A Rockpalast star hour that has lost nothing of its power, intensity and passion even after 42 years.

Co-founder with Gene Clark of The Byrds, James McGuinn (he later changed his name to 'Roger') was born on July 13, 1942. His proficiency on five-string banjo and six and twelve-string guitar made him a much-in-demand sessions player and back-up singer for artists such as Judy Collins, Bobby Darin, The Limeliters and The Chad Mitchell Trio.

In 1964 McGuinn began playing folk music in more of a rock style. This led to an association with like-minded artists such as Gene Clark, David Crosby, Chris Hillman and Mike Clarke, the original line-up of The Byrds. The group's initial album, 'Mr. Tambourine Man,' and Bob Dylan's electric/acoustic arrangements of his songs at the 1965 Newport Folk Festival were key events in creating a new sound to compete with the British Invasion. When the album's title track shot to #1 [Pop] in the summer of '65, folk-rock was born. Mr. Tambourine Man and the group's other #1, Turn! Turn! Turn! (To Everything There Is A Season) would both go in the Grammy Hall of Fame. The Byrds were inducted into the Rock & Roll Hall of Fame in 1991.

After the original Byrds broke up, McGuinn recruited new personnel. Hanoi Hannah is from his initial, eponymous solo LP. It's a story that became increasingly familiar as troops departed Vietnam; a Vietnamese 'girlfriend' now left on her own when her GI went home. The fact that McGuinn and Jacques Levy chose to name her after the notorious North Vietnamese radio personality/propagandist might well be because her primary profession in the song appears to have been prostitution.

McGuinn was in Bob Dylan's 'Rolling Thunder Review' in the mid-'70s and recorded a couple of albums as McGuinn, Clark & Hillman. McGuinn made a comeback in 1990 with the release of 'Back From Rio' on Arista. He continues to tour as solo artist, focusing on traditional folk music.