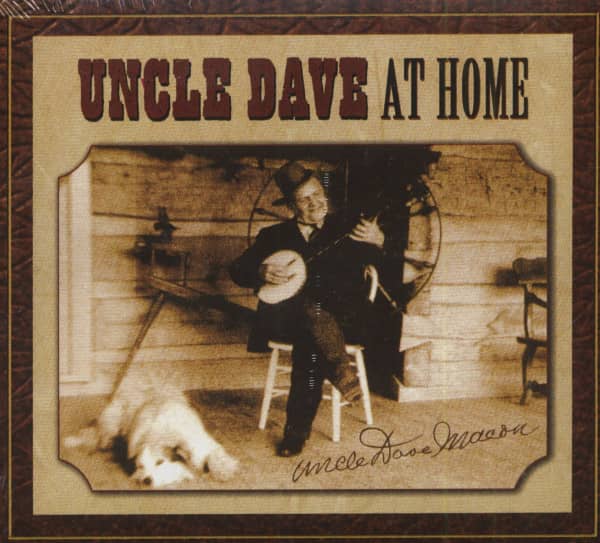 Coming from a Middle Tennessee heritage that included ballads, Civil War songs, church songs, African American blues and vaudeville and medicine show music, Macon began his career when he was fifty years old. He was one of the first authentic Southern folk musicians to make commercial records in the 1920s and his role as one of the founding and most beloved members of the Grand Ole Opry made him one of the first members of the Country Music Hall of Fame.

The music on At Home was recorded informally by pioneer folklorist, Charles Faulkner Bryan at Uncle Dave's home in Kittrell, Tennessee in 1950. Uncle Dave plays and sings some of his most popular numbers but nearly half of the pieces were never commercially recorded. This is old time music at it's best!

Keep My Skillet Good And Greasy 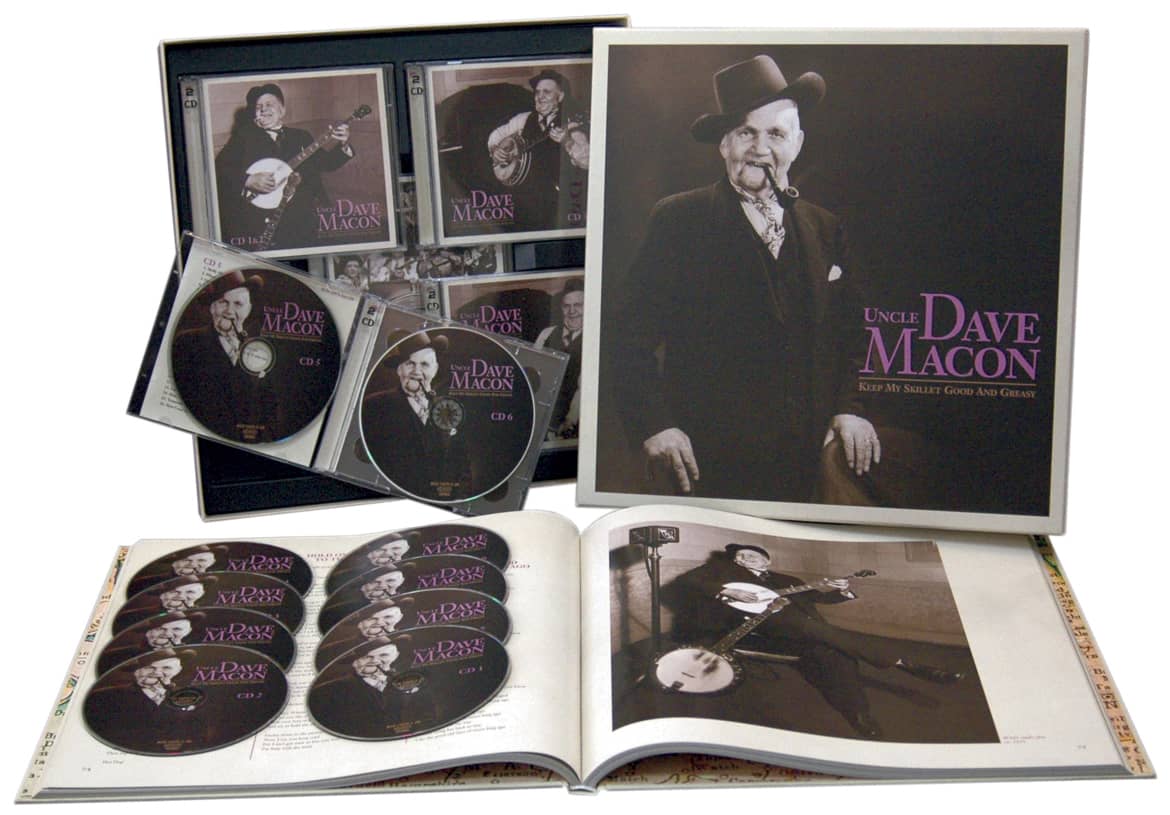 There was in those days a big old two-story frame house out on the Woodbury Pike near Murfreesboro, Tennessee, in the dusty little community called Kittrell. What locals called the Woodbury Pike was actually Highway 70A, one of the major routes crossing the state to the eastern mountains and Knoxville. Truck drivers, vacationers, bus passengers all looked at the house with curiosity, but many of them recognized the name on the house. Certainly the locals who lived nearby knew – it was hard not to. Across the top of the long front porch was a sign that said 'Uncle Dave Macon,' and to the right was a big wooden picture of a genial older man holding a banjo and grinning a big gold-tooth smile. "I want people to be able to find me in case they want me to come and play for them,"  the owner of the house explained to the curious.

Back in the 1930s, people were having little trouble finding Uncle Dave Macon. Churches came to him to see if he would help them raise money; auctioneers came to him to get him to play for country sales to attract bidders; vaudeville bookers came with offers to play tours that ranged from Boston to Florida; schoolhouse superintendents came to him asking for a show to help buy books in Depression-wracked rural districts. Even the bank of nearby Woodbury came to him when they finished building the new bank and had to transfer all the money from the old one: could they hire Uncle Dave to sit on top of the wagon with the money chests and play his banjo during the move? Surely no desperado would dare to try to rob a wagon that had Uncle Dave Macon sitting on top of it.

People all over Middle Tennessee knew David Harrison Macon and were used to seeing him at local schools and on the little courthouse squares. He was the one with the chin whiskers, the red suspenders, the gold watch and chain, and what Judge Hay at the Grand Ole Opry called "that million dollar Tennessee smile."  He was the one with the hat that bore the hat band slogan 'Old But Regular,' that twirled his banjo like it was a baton and fanned it with his hat, and that refused to drive a car because they weren't as dependable as mules. But he was also the one that was heard every Saturday night on the Grand Ole Opry, and that was featured on dozens of Victrola records put out by Vocalion, Brunswick, RCA, Okeh, Champion, and Montgomery Ward. He was the one who was country music's first real superstar, winning a national reputation years before Jimmie Rodgers or The Carter Family ever stepped into a studio. For years he was the most popular single performer on the Opry, a grand old man whose humor and personality won him fans everywhere. He was the first artist to make style a part of country music. As one of his fans said, "He may not have been the best banjo player or the best singer, but he sure as heck was the best something!"

Captain John Macon was a well-known and popular figure in Warren County. His own father was a Henry Harrison Macon, who in turn was descended from a Revolutionary War hero, Colonel John Macon, and from his uncle, Nathaniel Macon, a North Carolina Congressman and one-time Speaker of the U.S. House of Representatives. Sometime prior to 1830 Henry Harrison Macon settled in Warren County, on Hickory Creek, on a plot of some 600 acres. Before his death in 1851, Henry Harrison Macon expanded his holdings by over 2,000 more acres, and had established a distillery, as well as a saw mill, grist mill, and cotton gin.

The Macon family Bible indicates that John married Martha Ann Ramsey on December 2, 1855, in Warren County. The young couple soon built a handsome house in McMinnville, and the Macon Brothers bought a grocery store, a tin shop, and a mercantile business downtown. All this, as well as John and Martha's growing family, was interrupted in 1861, with the outbreak of the War Between the States. Both Macon brothers closed their stores and joined the 35th Tennessee Infantry Regiment, sometimes called the First Tennessee Mountain Rifle Regiment, commanded by Colonel Benjamin J. Hill. John Macon helped to organized the 2nd Company D; it along with some nine others was mustered in at Camp Smartt, near McMinnville, on September 6 and 7.

During the early days of the war, the regiment moved from Trousdale County to Bowling Green and finally to Shiloh, where they joined in one of the bloodiest battles of the conflict. Here the brigade the 35th was in suffered over 1,000 killed or wounded – over a third of its roster. Reorganized, the regiment fought in the northern Mississippi campaign, as well as at Perryville and at the Battle of Murfreesboro. The exact fate of 'Captain Macon's company' during the balance of the war is not clear; his regiment was reorganized and merged with others throughout the conflict, until their eventual dismissal at Greensboro, NC, on May 1, 1865. Nor are there any clear records to indicate exactly when Captain John returned home; he bought out his brother's share in the family businesses in 1862, and there is a record of the marriage of Joseph in 1865. We do know that by 1867 Captain John had reopened his store with a new partner.

The world young David Macon was born into in 1870 was the grim world of the Reconstruction South. In Warren County, crops lay fallow, buildings were in disrepair, and money was in short supply. Still, two generations of Macon prosperity gave the family at least some sort of cushion, and the year young David was born, his father was still relatively prosperous. The census records gave his real estate value that year as $2000, his 'personal value' estimated at $4000 – over six times the average per capita income in the state at that time. The Macon household also included three live-in employees, two housekeepers and a 'male farm laborer.' Though the Macon family was large, it was well provided for; young David was soon attending school in town, and listening to some of the folk music from the region. His sister Lou was an accomplished pianist, and often bought the latest sheet music to try out in the family parlor. Through her, David picked up rudiments of singing and a knowledge of songs.

The young boy was soon playing the guitar – he had not been introduced to the banjo yet – and picking up songs. Many years later, when asked if he remembered the first song he learned, he smiled, nodded, and proceeded to sing it. It was a comic piece called Greenback.