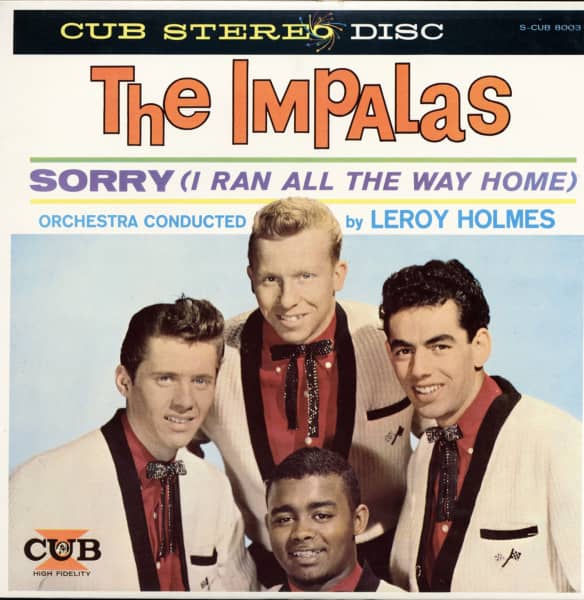 The Impalas: Sorry (I Ran All The Way Home) (LP)

(MGM Australia) 12 tracks - classic Doo Wop band from Brooklyn, NY. Re-issue - the original 1959 album (S-CUB 8003) goes up to 200 $ - so this one here is the real deal - top quality!
Nothing much unusual was happening that afternoon in Brooklyn. High school had just let out for the day and three boys met for their daily coke together. They started out by "batting the breeze" in the usual manner of friends who had known each other in school for a couple of terms—class-room gossip, the merits of new records, girls they were dating. But, soon the conversation turned a little more seri-ous. They had just started their senior year at school and the past few days had been devoted to talks with teacher-advisors attempting to steer them to subjects which would prepare them for study or further work after graduation. Each of the lads had his own idea of the sort of career he'd like, but what each liked still more was singing.

The idea of singing careers seemed foolish at first, but, as the discussion went on and idea after idea came out, all three boys wondered if the notion were really that "far out". As one of them said: "If we don't try now, we'll always kick ourselves later." And so, three seemingly-average Brooklyn teen-agers with a taste—and what later proved terrific talent—for music decided to form a trio. Their names—Dick Wagner, Tony Carlucci, and Lenny Renda, the latter having the distinction of playing the guitar as well as singing. For several weeks, the neighborhood trio worked hard together each afternoon. But, something was missing. They needed still another voice, it seemed. Suddenly, they remembered a friend, Joe Frazier, who sang, too. He seemed just right, but, of course, he was way across the river in Manhattan. But, they gave the idea a try.

Joe wound up fitting the group like the proverbial glove—and the new quartet quickly arranged a schedule of meetings for rehearsals convenient to everyone. As it grew more and more polished, the group found itself more and more in demand for neighborhood and school dances. It was time to take a stab at a professional audition. Now, it became necessary to get a good name for the quartet. After rejecting dozens of titles, their final tag of The Impalas came the day Lenny's father bought a new Chevrolet Impala. The boys found themselves a manager interested in them with surprising speed—and even more quickly a recording company that liked their brand of singing: Cub Records, a product of MGM Records. The first waxing The Impalas made for Cub—"SORRY ( I Ran All The Way Home )"—zoonled them within weeks to a high spot in the "Top Ten" best-seller listings. And, the waxing stayed there for months, with other hit platters following hard on its heels. Since that time, The Impalas have settled themselves for a long career filled with ever-increasing promise. Four ambitious, hard-working and talented boys have found themselves a niche—doing what they've dreamed of doing and doing it very well indeed, as this excellent first album collection by them for Cub Records shows to entertaining perfection!

Article properties: The Impalas: Sorry (I Ran All The Way Home) (LP)

Learn more about The Impalas
The Impalas Sorry (I Ran All The Way Home) Unlike The Falcons, The Impalas started out... more
Close menu
"The Impalas"

Sorry (I Ran All The Way Home)

Unlike The Falcons, The Impalas started out integrated and stayed that way. The Caucasian three-quarters of the group (first tenor Tony Carlucci, second tenor Lenny Renda, and baritone Richard Wagner) came together in the Canarsie section of Brooklyn. Their rehearsals in a local candy store and on neighborhood street corners attracted the attention of African-American tenor Joe 'Speedo' Frazier, who came in as lead singer. Depending on your source, their moniker stemmed from either the fleet animal or the Chevrolet model of the same name.

The Impalas' 1958 debut single for Dot-affiliated Hamilton Records, pairing First Date and I Was A Fool, went nowhere. Songwriters Aristides Giosasi (the male half of the Brooklyn-based brother-sister duo Gino & Gina, whose [It's Been A Long Time] Pretty Baby was a Top 20 hit in the spring of '58 on Mercury) and Artie Zwirn gave them the catchy, upbeat Sorry (I Ran All The Way Home). Through deejay Alan Freed, who grabbed the publishing for his Figure Music, the quartet landed a pact with MGM's Cub subsidiary.

They waxed Sorry and its Giosasi/Zwirn-penned B-side ballad Fool, Fool, Fool at New York's Metropolitan Studios on October 30, 1958, Leroy Holmes conducting the orchestra. Released the following January and boasting a splendid acappella intro, Sorry vaulted to #2 pop and #14 R&B that spring. The quartet's breath of rarified chart air was brief. Oh, What A Fool, another Giosasi/Zwirn copyright that was their first Cub encore, peaked at #86 pop with Sandy Went Away on the flip. Peggy Darling b/w Bye Everybody went nowhere before year's end. Billing them as Speedo and The Impalas didn't help All Alone b/w When My Heart Does All The Talking in 1960. Cub pressed up an LP named after the group's greatest hit. 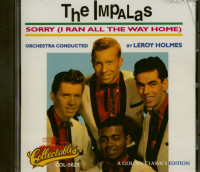