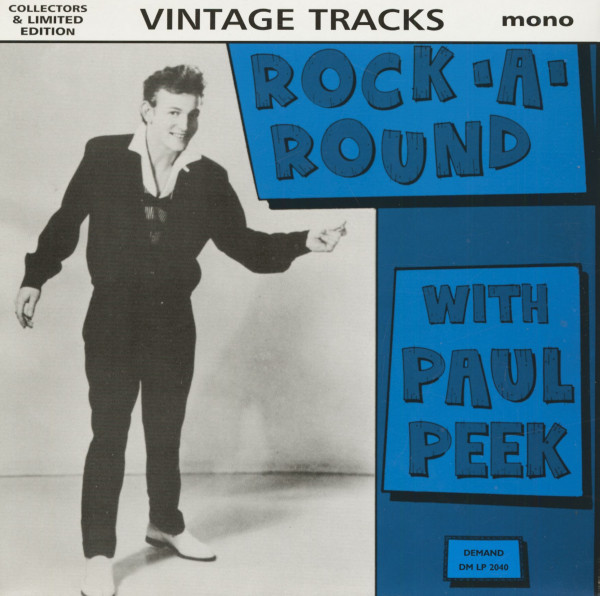 Remember the crazed, agonised vocals of GENE VINCENT clawing his way through "BE-BOP-A-LULA" whilst a red haired rhythm guitarist nearly stole the lime-light? That redhead was PAUL PEEK back in 1956. PAUL PEEK a former steel guitarist with Country Earl & The Circle Ranch Gang was Join' a gig with another country singer Red Redding in a bar called the Metropole accross the street of the Casino Royal, Washington D.C., when he was invited by Bill "Sheriff Tex" Davis, manager of GENE VINCENT to see Cliff Gallup, lead guitarist of Gene Vincent's famous BLUE-CAPS.

He mentioned that he was looking for a rhythm guitarist and PAUL said, "I can play some rhythm". Years later he admitted, "I kind of took the change on that, cause I was really a pedal steel player". But he invited me to audition so i went over to the Casino Royale and ran through some songs for them. I remember Cliff showing me the chords to Jezebel. i had a little trouble with that one. Afterwards they all went into the back and had a little meeting with the other BLUE CAPS, then they came back and handle me a cap and said, "You're a BLUE CAP now, man". So I lucked out, that's all. And within' a couple of days of my joining we all flew out to LA and did the filming for the movie. I just happened to be in the right place at the right time.

By 1957 PAUL PEEK was acting a duel role as a BLUE CAP in their second line-up whilst attempting to launch a solo career writing original material as well composing for the BLUE-CAPS, fi. "Pink Thunderbird" (1956), "Yes, I love you baby" (1957) and "Time will bring you everything" (1957). He signed for Bill Lowery's Atlanta based and newly formed NRC label, and cut a superb double-sided classic "THE ROCK-A-ROUND" and "SWEET SKINNY JENNY" as their first issue, NRC-001. PAUL's frantic vocal and a driving bac-king provided by JOE SOUTH and JERRY REED on guitars, ESQUERITA on piano, BILL MACK slappin' bass, NELSON ROGERS on drums and RAY JONES on sax, deserved to make NRC's first release an immediate success. PAUL PEEK's second NRC release was a COASTERS type novelty song "OLDSMO-WILLIAM" which gained considerable media attention, including an appearance on the DICK CLARK'S BANDSTAND. "GEE BUT I MISS THAT GIRL" reveals another facet of the PAUL PEEK repertoire, a teen ballad written by fellow BLUE CAP BOBBY JONES and featuring Bobby ob bass.

PAUL PEEK has stuck with the music business right through the present time, recording for local and major labels, some of them can be found on this album, and playing a leading part in the 1982 BLUE CAP reunion tour in Europe. Here though, we have the solo talent of PAUL PEEK at his early best, a real "ROCK-A-ROUND". 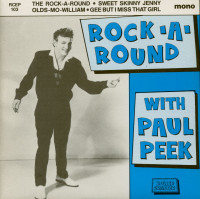