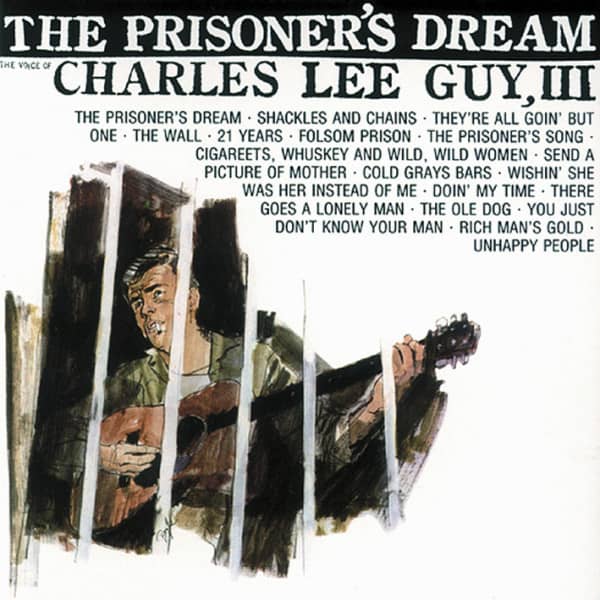 1-CD with 4-page booklet, 17 tracks. Playing time approx. 46 mns.
When he was 16, Charles Lee Guy was convicted of manslaughter and was locked up. In jail, he learned how to play guitar and started writing songs. Then he sent a tape to Capitol Records, and Capitol was sufficiently impressed to bring their studio equipment to Vacaville Prison in December 1962. Joe Maphis came along to play guitar on songs like Shackles And Chains, The Prisoner's Song, Cold Gray Bars,
They're All Going Home But One, Doin' My Time and Rich Man's Gold. Something different!
Charles Lee Guy, III, was only sixteen when he was convicted of involuntary manslaughter, and sentenced to spend several years in a California State Prison. During those years Charles grew from a young boy to a young man, and his talents as a singer and a guitarist also grew. It is in that capacity that we at Capitol Records became interested in him. It all started when he sent us a tape of himself singing a few songs, accom-panying himself on the guitar. It was just a simple, unprofessional tape, something he had made on a machine that was available to inmates at the prison, but his voice had a lot of warmth and emotion that aroused our interest.
This was not just a kid singing songs; this was a deep-feeling young man, a prisoner, lonely and filled with longing, finding through his singing a way of letting his heart speak. We were so impressed that we wrote to Dr. William Keating, Superintendent of the Vacaville Prison where Guy was imprisoned, asking him if it would be possible to come up there and record young Guy on the spot. Dr. Keating's response was all that we had hoped for and more. And from that first letter, all the way through the subsequent recording sessions, he proved to be a wise and warm man whose job is superintending but whose main concern is the individual and his rehabilitation. He did everything possible to help this project. It was December of 1962 when we went up to the prison and there, in a small auditorium, recorded the songs of Charles Lee Guy, III. A recording en-gineer accompanied me, and Joe Maphis came along to help out on guitar.
Guy sang mostly prison songs, for they are the ones that contain the thoughts of home, family, sweetheart, and the other things that occupy a man's mind
when he's in prison. Some of them were his own favorites. Others were favorites of the men who had been listening to him sing during their long, sad hours. And one song ( Cold Gray Bars ) was written recently by Spade Cooley, a fellow prisoner of Guy's, who continues to maintain his own inter-est in the music that has been his life's work. Some other songs you'll hear in this album are new ones, also written by famous men. For when I decided to make the album, I called on composers Harlan Howard, Johnny Cash, and Mac Wiseman and asked for help.
Each became interested in this unique project and in young Guy's sincere desire to make good, and they suggested some songs and even wrote some for the album. Harlan went along to the prison to work with Guy and to learn more about how a prisoner really feels. Harlan Howard's songs are The Wall and Wishin' She Was Here Instead Of Me. Johnny Cash wrote Folsom Prison Blues and Semi APicture OfMother. There's no denying that this means far more than the usual album to me, to the men who've written songs for it, and, especially, to Charles Lee Guy, III.
For him it will mean new confidence and maybe it will help to prove Dr. Keating's thesis that a prison need not be an end but can sometimes mean a new beginning. For me it will provide the satisfaction that always comes with the making of a good recording, and I can't deny a feeling of pleasure about being able to help a gifted young man by being able to provide the op-portunity.
We hope you will share with us the excitement and hopes that are in this album.
Ken Nelson, Executive Producer, Capitol Records, 1963 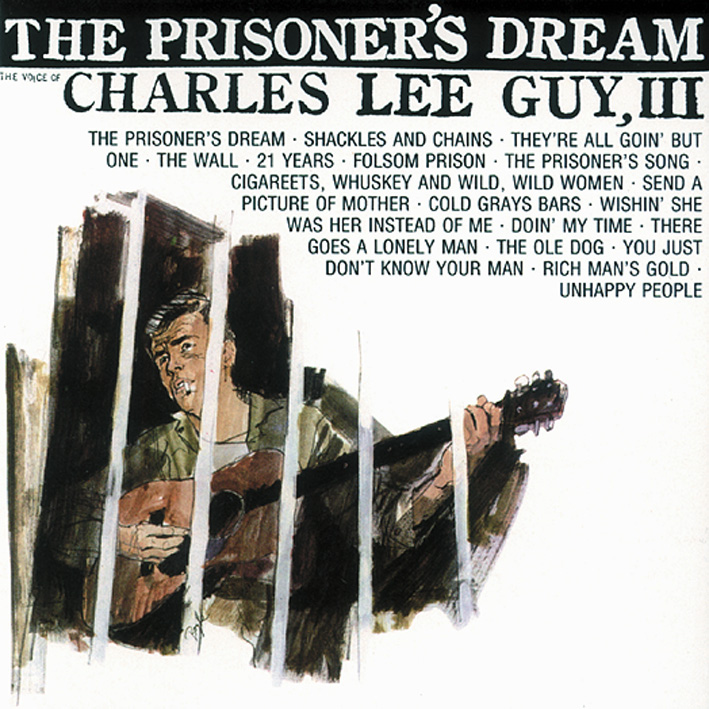 Don't this sound like a name out of the society pages? "Charles Lee Guy III was feted at the Royal Oaks Country Club to commemorate his return from a holiday in Europe buying rare artworks and sipping Evian water . . . " Well, this Charles Lee is nothing like that. He's an actual singing prisoner. Remember all that crap about Johnny Cash being in prison? He wasn't. Charles Lee, who seems to have disappeared (even Richard Weize couldn't track him down) was.

According to Ken Nelson's original notes, Guy was incarcerated for involuntary manslaughter at age 16, sent to Vacaville Prison and later managed to mail a tape to Capitol. The entire album of 12 songs, also titled "The Prisoner's Dream", was cut in the Vacaville auditorium in late 1962 with Joe Maphis playing backup acoustic guitar. Guy had a bit of an identity problem on the album, which consisted of prison songs and other sentimental faves. The title track (an old Karl and Harty number) features him imitating Hank Snow. Shackles and Chains features a Marty Robbins imitation while They're All Goin' Home But Me shows off his best Jimmie Skinner voice.

Apparently Guy managed to go "home," because in 1964 he cut six more songs in Nashville with a backup band, all but one written by Harlan Howard. It was sadly ironic that he'd developed his own vocal style by then, and actually showed some real promise as a vocalist. But only one single resulted which went nowhere and Charles Lee Guy III disappeared into obscurity. This album is a favorite of Bear Family's Richard Weize, and if prisoner's songs are your thing it may be a favorite of yours, too. (RK)