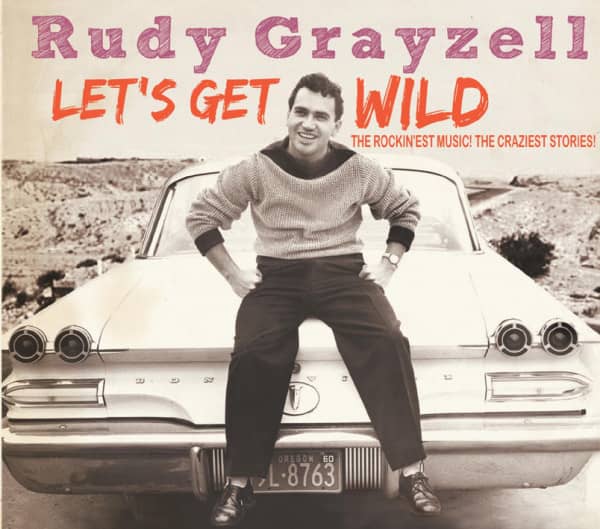 .... we just have received the sad news from our friend and musician Nate Gibson that Rudy Grayzell died!
Our condolences go to his family - may he rest in peace!, December 2019
1-CD digipack with 52-page booklet, 32 tracks.
The first comprehensive anthology of one of the original legendary rockabilly stars! Includes the previously unissued complete version of Let's Get Wild, plus four other unreleased recordings Includes the original hit version of Duck Tail' now a rockabilly classic! Rudy Grayzell's story is told in extensive liner notes

Don't you mess with my ducktail'That was Rudy Grayzell's hit song. But his story is longer' and stranger' than anyone knew. His first record, 'Looking At The Moon AndWishing On A Star', was a big hit in 1953, and one year later he recorded the first cover version of Hearts Of Stone. After that, he joined the legendary Starday label to record Duck Tail , Let's GetWild, and several other classics. And then he was on the legendary Sun label for one single.

In the interviews accompanying this set, Rudy Grayzell talks about performing Duck Tail naked in a graveyard for several drunken women, and talks about his many marriages, his brushes with Elvis Presley (Elvis gave him the nickname Rudy Tutti), making love to a woman during a tornado, playing with Doug Sahm when Sahm was nine years old, and much else. Among his other accomplishments, Rudy Grayzell was the first Hispanic rock'n'roller; he was born Rudolfo Jiminez in south Texas.

This set includes his complete recordings for Abbott, Capitol Starday, Sun, and Award.

It all adds up to the last word on one of the first names in rockabilly. 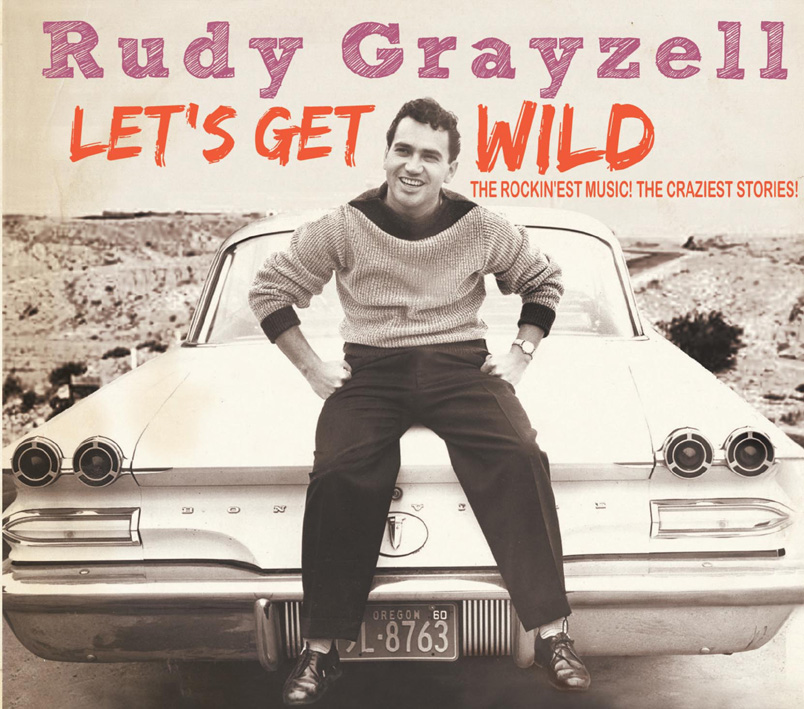 At five feet, six inches, Rudy Grayzell might be smaller than most, but he's larger than life. Did he go to Doug Sahm's school, telling the teacher that he was his uncle so that he could pull him out for road trips? Did he hang out with Elvis, Carl Perkins, Johnny Cash, and other luminaries as often as he says? Did he and Roy Orbison coin the word rockabilly in a Bossier City hotel? Did he sing Ducktail naked in a cemetery for a bunch of drunken girls? Were he and Link Davis chased by a ten-foot alligator in Lake Charles, Louisiana? Was he really making love to a woman in a trailer when a tornado hit, throwing him onto the woman's mother? And what about the hermaphrodite and the five wives? You won't find better stories anywhere in rock 'n' roll. You won't find more eclectic music, either.

Rudy Grayzell was born Rudolfo Jiminez in Saspamco, just south of San Antonio, Texas, on June 8, 1933. His father, Joe, was Hispanic, and his mother, Julia, was of Italian ancestry. His Hispanic heritage melted into his early grounding in country music and his love of R&B to create a sound that one reviewer likened to Roy Orbison on a three-day drunk in Tijuana. His father worked for a pipeline company, and Rudy grew up in San Antonio listening to Hispanic music blasting in from south of the border and country music blasting in from all around. He loved it all, but he especially loved Ernest Tubb on the Grand Ole Opry.  "I liked this chick named Norma," he told Dan Davidson, "but she liked some guy who played guitar and that just tore me up. So I had my folks buy me a guitar and I learned to play it." Aged seventeen, he assembled a combo called the Silver Buckles, and they played clubs and bars. "They allowed you to play in clubs if you were underage,"  he explained. "You just couldn't drink. We did all the songs that were popular. Lefty Frizzell, Webb Pierce, Faron Young, Floyd Tillman." At South San Antonio High School (known locally as South San), it was compulsory to pass algebra in order to graduate, so Rudy aced the subject by dating the math teacher. From the point he left school, music was his sole meal ticket. For someone with no charted hits, that's beyond improbable.

Charlie Walker is the subject of a definitive Bear Family box named for his biggest hit, 'Pick Me Up On Your Way Down' (BCD  15852), and he landed Grayzell a spot on KMAC, San Antonio, selling Pearl Beer. The omens were good: Ernest Tubb got his start on KMAC selling beer. Because Walker was a dee-jay, he had the ear of the guys at the record labels and when he told them that they should sign an artist, they often did. There are two accounts of how Rudy ended up on Abbott Records. In the first, Walker called the boss of Abbott Records, Fabor Robison, who split his time between Shreveport, Louisiana and Hollywood, California. Fabor was in Shreveport part of the time because two of his top acts, Johnny Horton and Jim Reeves, were based there on the Louisiana Hayride, and he was in California because his labels were based there. "Fabor and Jim Reeves drove down from Shreveport to San Antonio to check me out," Rudy says. "They picked me up, carried me back to Shreveport, and that's where I recorded my first session. We did it at KWKH after the station went off the air."  Rudy was acquired right around the time that Robison bought out his partner, drug store owner Sid Abbott, to assume full control of Abbott (the date of the transaction was August 7, 1953 and the amount was $4575, for those interested). But Fabor had another quasi-partner, Sylvester Cross at American Music in Los Angeles. Both versions of events come from Rudy, and in the second version, he said that he sent out publishing demos to every music publisher, and American Music replied, so it's possible that Sylvester Cross sent Robison to check out Grayzell. Either way, Rudy Grayzell was an Abbott recording artist as of mid-1953. 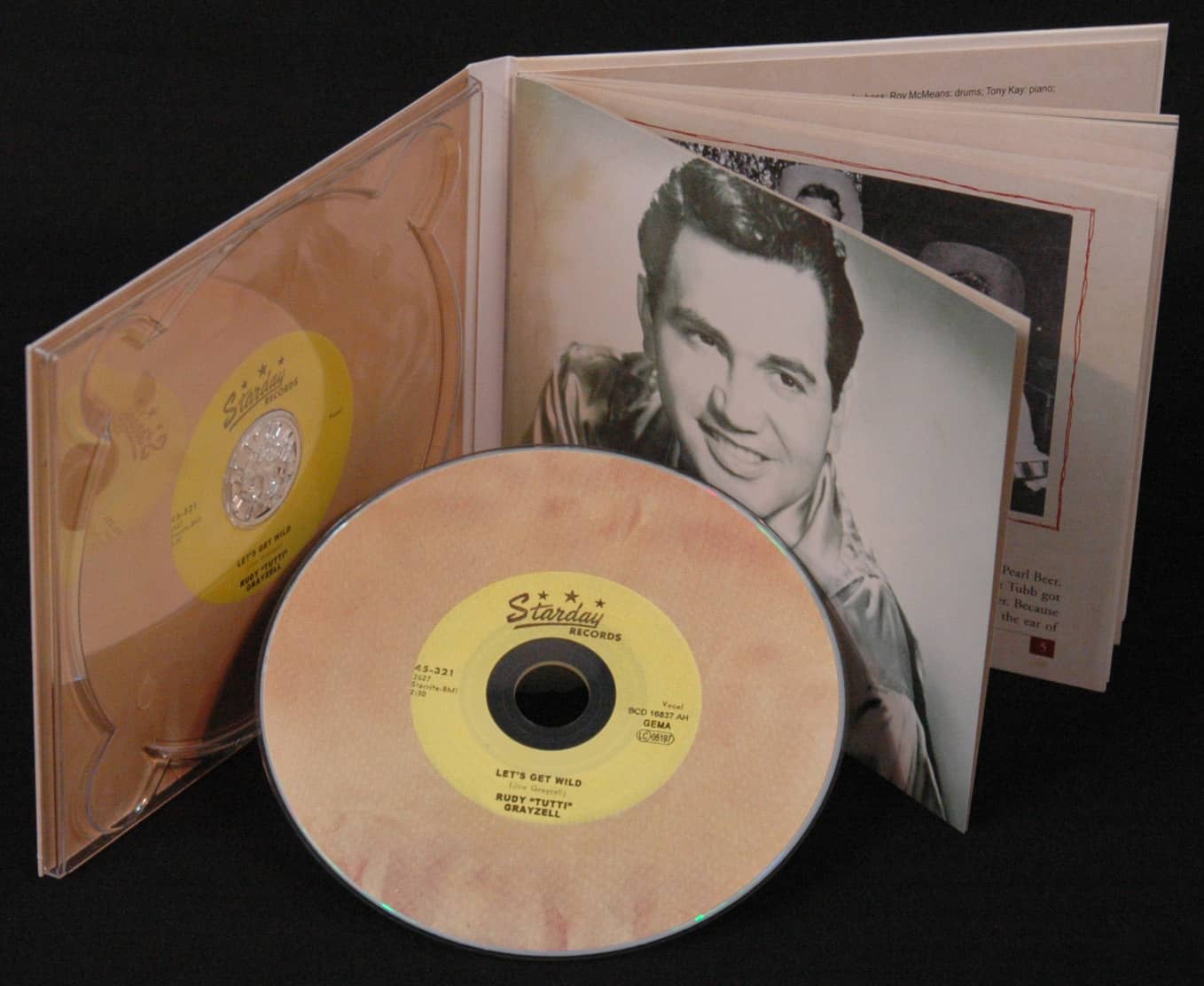 The big record throughout the fall of 1952 and the spring of 1953 was Slim Willet's Don't Let The Stars Get In Your Eyes. Very unlike any other country record to that point, it had an Hispanic rhythm and odd meter. Rudy's first recording for Abbott, Looking At The Moon And Wishing On A Star, had the same rhythm and tempo as Willet's oddball record, and Rudy tore into it with more lungpower than finesse. "This is a ranchero which Grayzell really belts," noted 'Billboard'. "Watch it and watch him. This could happen." It was issued under the name Grayzell at Fabor's insistence. Figuring that the country market wasn't ready for anyone called Jiminez, he told Rudy to find another name. Rudy's great, great grandmother was a German immigrant whose name was anglicized to Grayzell, and he has been Rudy Grayzell (almost) ever since. Looking At The Moon didn't chart, but probably sold quite well because Skeets McDonald covered it for Capitol and Charline Arthur for RCA. Rudy's version was issued in England on London Records, albeit in November 1954.

There were two more singles on Abbott. The second coupled another of Rudy's songs, Bonita Chiquita, with Jack Rhodes' I'm Gone Again (Rhodes, for those who don't inspect composer credits, was the writer of several songs for Gene Vincent as well as country classics like A Satisfied Mind and Silver Threads And Golden Needles). The third single coupled Ocean Paradise (a song that Rudy wrote with his pal Tommy Jennings)with It Ain't My Baby (And I Ain't Gonna Rock It). The latter was a salty little song by Johnny Hicks, the emcee of The Big 'D' Jamboree in Dallas, where Rudy performed occasionally. Again for those who don't memorize composer credits, Hicks wrote Charline Arthur's Honey Bun. Fabor had justifiably high hopes for It Ain't My Baby because it was a catchy bar-room singalong and he had equally high hopes for Ocean Paradise because it worked the same groove as another of his big records, Mitchell Torok's Caribbean, but neither took off, and Rudy either quit Abbott Records or was dropped after one year.

Unlike most of those associated with Fabor Robison, Rudy has nothing but fond memories of him. "He was fantastic," he says. "He got the most out of me. He'd say, 'Rudy, do this,' 'Rudy, do that.' He was all the time thinking how to get the best performance." If Rudy had scored a major hit on Abbott and tried to extract money from Fabor, as Jim Reeves and the Browns tried to do, his opinion might have been a little more jaded. Reeves reportedly left his house one night intending to shoot Fabor, while Maxine Brown called him "the sorriest bastard then infesting the industry." Fabor sold his label (more than once) and spent some time laying low in Brazil. He returned to the United States in the early 1960s and promoted a song he'd produced in 1957, Ned Miller's From A Jack To A King. After it became a hit on its second go-round, he sunk the profits into the Fabor Sunbathing Capsule. According to some reports, the capsule was used in an episode of 'Star Trek,' and was featured on the cover of 'Life' magazine modeled by George Hamilton. Skin cancer scares bankrupted him, and he died in Shreveport in 1986.