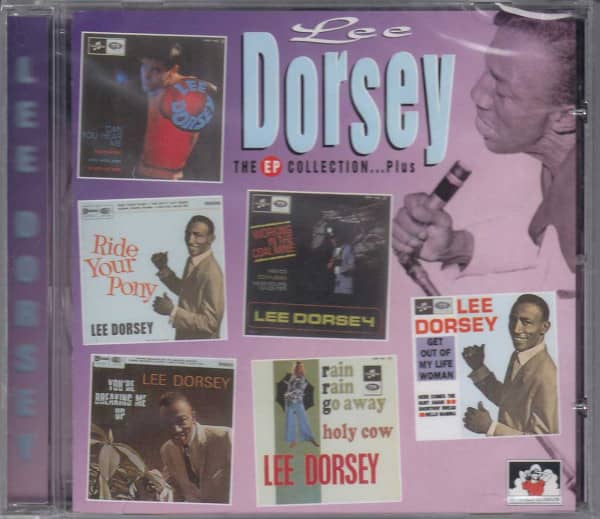 (See For Miles Records)) 26 tracks Stateside &, Columbia
,-
It was in June 1967 that the 'Atlantic Soul Review' hit Amsterdam to play a concert at its renowned concert hall, the Concertgebouw. The star studded pack-age featured some of the finest talent from the Atlantic and Stax labels such as Sam and Dave, Eddie Floyd, Carla Thomas, Arthur Conley and Booker T and the MG's. Wilson Pickett had been announced as the headliner of the show, but he appeared to be indisposed and was replaced by Lee Dorsey at the last minute. I had recently been installed as the label manager for the Stateside label at Bovema, the Dutch company that represented EMI Records.

Lee's recordings on the American Amy label were released on the Stateside label in Holland. I was duly consigned to perform the usual hospitality ritual bestowed on visiting international artists that the record company represented. In the case of Lee Dorsey, this proved to be a delightful job. Lee was a happy and easy going character with an infectious grin and chuckle. I spent one of my better nights out, introducing Lee to the various delights that Amsterdam had to offer during the late 1960's, and I can assure you that he was great and appreciative company. The next evening he proved to be a consummate showman and hard worker as the only non-Atlantic/Stax artist in the 'Atlantic Soul Review'. Lee stole the show and won the hearts of the Dutch soul fans with his segment in the show, culminating in his suggestive and humorous rendition of 'Ride Your Pony', which caused a near riot in the usually sedate Concertgebouw.

Irving Lee Dorsey was born in New Orleans on December 4, 1926 and moved to Portland, Oregon at the age of 10. During the late 1940's and early 1950's Lee was a successful lightweight boxer, operating under the nickname 'Kid Chocolate'. He survived a four year stint in the Navy after which he resumed his boxing career. Lee hung up his boxing gloves during the mid 1950's when he returned to New Orleans. Circa 195658 he met Allen Toussaint, either at a party or in a studio to which he had taken a page of verse in the hope of making a record out of it. At that time the younger Toussaint, born in New Orleans in 1938, had already passed through the R&,B group leader and touring accompanist stages to begin his climb through the ranks of local session musicians. During the late 1950's Lee made his first recordings for Joe Banashak's Instant label. One of these singles was 'Lottie Mo', which became a regional hit on which he was backed by Allen Toussaint, who also arranged the track.

Marshall Sehorn, who was Southern promotion man, talent scout and sometime producer for Bobby Robinson's New York based Fury label, heard 'Lottie Mo' on the radio during one of his visits to New Orleans in 1960. Marshall was duly impressed by the record and Lee subsequently signed to the Fury label. 'Ya Ya', Lee's first Fury single, exploded and went to No. I R&,B and No.7 Pop on the Billboard charts in September 1961. Petula Clark covered the song as 'Ya Ya Twist' for consumption on the European market, and reached the UK Top 20 with it.

Fury followed 'Ya Ya' up with 'Do-Re-Mi' in December 1961 and again Lee scored a considerable hit, peaking at No.27 Pop and 22 R&,B on the Billboard chart. 'Do-Re-Mi' was regularly performed by Georgie Fame and Dusty Springfield. Lee recorded another 3 singles for Fury, but the hits had dried up. A subsequent Fury album contained 15 tracks, Lee's total recorded output for the label, recorded in New Orleans in 1961 and 1962. Allen Toussaint who wrote, arranged and produced hits for Joe Banashak at this time, also freelanced and almost certainly arranged and co-produced with Marshall Sehorn all of Lee's Fury sides. Toussaint did not play piano on 'Ya Ya' according to Kurt Mohr's Lee Dorsey discography. The backing on 'Ya Ya' was provided by: Marcel Richardson, piano, Melvin Lastie, trumpet, Harold Battiste, tenor sax, Red Tyler, baritone sax, Justin Adams, guitar, Chuck Badie, bass and John Boudreaux, drums. The back-up on 'Do-Re-Mi' consisted of: unknown horns, Allen Toussaint, piano, Roy Montrell, guitar, Richard Payne, bass, and John Boudreaux on drums.

The Fury label collapsed in 1963 and Allen Toussaint was drafted into the army at the same time Lee returned to his car repair business while his recording career temporarily stalled. During the next few years Lee, still managed and produced by Marshall Sehorn, had a single released on the Smash label and two on Constellation, but nothing registered. In 1965 Allen Toussaint was demobbed and together with Marshall Sehorn formed Sansu Enterprises, which incorporated management, production, arranging, publishing and recording.

Their records were released on the Sansu, Deesu, Kansu and Tou-Sea labels. Lee's recordings, with the exception of 'Love Lots of Lovin'', a duet with Betty Harris, did not appear on the house label, but were released on the Amy label as part of a license deal with Bell Records. Lee's first single for the Sehorn /Toussaint partnership produced Lee's third chart single. 'Ride Your Pony' peaked at No.7 R&,B and reached No.28 Pop during the summer of 1965. The following year was a bumper year for Lee when three of his singles scored top 10 placings in the R&,B chart. 'Get Out Of My Life, Woman', 'Working In The Coal Mine' and 'Holy Cow' also registered on Billboard's Pop Top 100, peaking at 44, 8 and 23 place respectively.

By early 1968 the quality of Lee's output started to dip a bit and singles like 'Mexico' and 'My Old Car' were commercially unsuccessful. By mid-I968 Lee was backed on his recordings by Sansu's other hot-act The Meters, providing new bite to Lee's laid back vocals. Unfortunately only one of these tracks, the hilarious 'Everything I Do Gohn' Be Funky', registered on the best selling charts : No.33 R&,B and No.95 Pop in June of 1969, on the Amy imprint.

In 1970 Sansu made a deal for Lee's product to appear on the Polydor label. The critically acclaimed but moderately successful 'Yes We Can' album launched the deal. Lee continued to record on Polydor and later ABC, but chart success eluded him.

,'Ya Ya' enjoyed a revival in 1973, when it was featured on the soundtrack of American Graffiti, while artists like John Lennon, The Pointer Sisters, Little Feat and The Judds covered his work.

Lee's last album 'Night People' got rave reviews and it was generally felt that Lee's time had come again. And indeed he made a qualified stage comeback, as a sterling support to James Brown, Jerry Lee Lewis and even The Clash on their 1980 American tour. Lee started to record a country album in 1985, one of his ambitions. Dubbing his vocals in New Orleans over accompaniment recorded in Nashville, Lee managed to finish three tracks before he died of emphysema in his New Orleans home on December I, 1986. The world of popular music lost one of its most engaging characters.

In a lot of ways, Lee Dorsey was Allen Toussaint's vocal alter ego. As architect of the early '60s New Orleans R&B sound and A&R man for Minit and Instant Records, Toussaint wrote, arranged, produced, and played splendid piano on hits by a host of Crescent City luminaries, but Dorsey was a personal favorite. "He had such a unique voice that you could go to subjects and humor that you never would dare try with another type of vocalist or a debonair personality," says Allen. "He was just such a high-spirited guy, and such a unique voice that always sounded like it had a smile in it. It was just a pleasure to hear his voice, for one thing. And we spent lots of time together, and he loved singing so very much. So that was always quite gratifying."

Born December 4, 1926 in the Big Easy, Lee's family moved to Portland, Oregon when he was 10. After being wounded in World War II, Dorsey boxed as Kid Chocolate, then returned to New Orleans and learned auto repair. Lee was singing beneath talent scout Renald Richard's car one day, and Richard offered him $50 to record at Cosimo Matassa's studio, resulting in his '59 debut single Rock for Matassa's Rex label. Toussaint played on Lee's Valiant encore Lottie Mo, writing the flip, Lover Of Love.

When Fury Records promo man Marshall Sehorn swung through town and heard Lottie Mo on the radio, he thought it was Ray Charles. Learning otherwise, he hipped his Harlem-based boss, Bobby Robinson, to his discovery. Robinson came down to check Lee out, the two penning the playful Ya Ya on Dorsey's porch after hearing a gaggle of nearby kids singing bawdy rhymes. Since Toussaint was contracted to Minit, he couldn't play the date. "Marshall brought that to me to make a demo for him, to take it to Harold Battiste so they could record it," says Allen. "So I made the demo, and I played it like that. And Marcel played it like that as well. So of course it sounds like me, because it's my idea. But that's Marcel Richardson playing." Ya Ya paced the R&B charts and climbed to #7 pop in 1961, and Lee's Earl King-penned encore Do-Re-Mi hit the next year. But when Allen was drafted, Dorsey's hits dried up.

Toussaint came back home in 1965. Sehorn enlisted his production savvy to get Lee back on track; they cut the dance workout Ride Your Pony, owing no small debt to Jr. Walker & The All Stars' Shotgun. "It was the only time that I tried to write a hit song," says Allen. "I really tried to write a hit. I had been in the military for a couple of years, and I was getting out, and I figured everyone was all the way around the track and here I am just at the restarting gate. And so with 'Ride Your Pony,' I tried to write a hit song. And I mentioned states in it and cities and various things, really trying to reach people. And I must say, I had fun doing it." Written under Toussaint’s Naomi Neville alias, Ride Your Pony galloped to #7 R&B and #28 pop on Larry Uttal's New York-based Amy logo. That Crescent City collaboration would continue on Lee's 1966 hits Get Out Of My Life, Woman, Working In The Coal Mine, and Holy Cow. 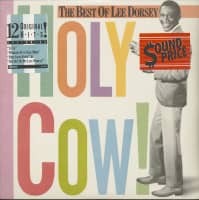 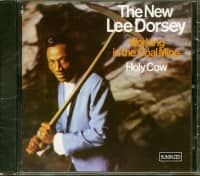 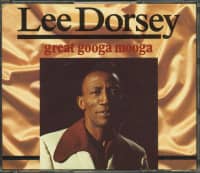