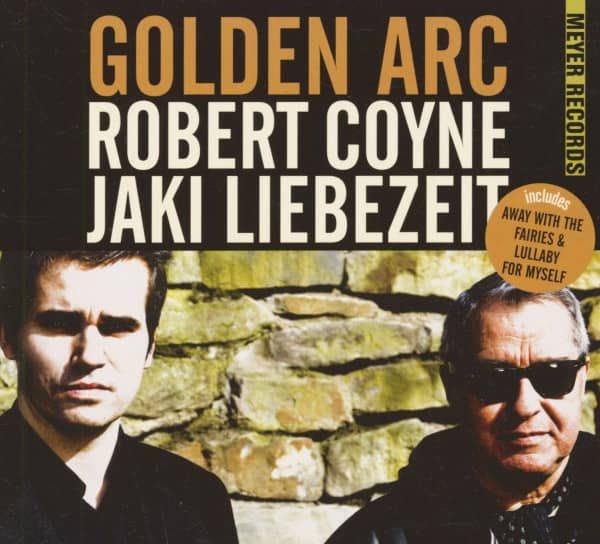 From experimental arrangement to series production in just one year: just 12 months after their first collaboration, singer-songwriter, guitarist and multi-instrumentalist Robert Coyne and drumming legend Jaki Liebezeit reunited in the studio to plumb the musical and lyrical depths of consistent reduction. The result is called "Golden Arc" - a quiet and intimate, yet at the same time immensely exciting journey with two absolutely independent artists who have discovered that they share a common path and a similar heartbeat.

As with the first album, "The Obscure Department," Coyne and Liebezeit continue to work on the guts of the song on "Golden Arc": Coyne's lyrics and melodies are carefully distilled emotional essences, grounded and at the same time set in motion by the elemental and stoic beats of the old master Liebezeit. And in the first few seconds of listening at most, it is amazing how organically the machine-like disciplined drums fit into the songs. In fact, the beats are a pulsating translation of the dark-colored lyricism, whose few, haunting lines spin repetitively into the subconscious - without beginning, without end, just being.

In contrast to the brittle first album, however, the part-time duo allows themselves a few delicate hues this time around. "Although the sound is still deliberately very pure, there is a little more instrumentation," Robert Coyne tells us. The additional timbres come in the form of cellist Aglaja Camphausen (who already contributed to two songs on "The Obscure Department") and a few well-placed fairy vocals by Aglaja Camphausen and Coyne's wife Wendy. But they don't disturb the intimacy of the songs one bit. On the contrary: Instead of hanging like garlands on the sparse arrangements of guitar, vocals and drums, they accentuate the minimalism and illuminate for seconds an unexpected depth in it. Because for all the reduction: as with any good poem, unnamable soul strings resonate in the lines of text and fragments of melody - different ones for each listener.

This is what makes the music so infinitely liberating: it leaves room. It does not define, it does not interpret, it does not exercise sovereignty. That is great art. And it can only happen when the artists themselves do not want to force anything.

Robert Coyne describes the artistic process in the recording studio in an uncomplicated way: "It was almost the same as with the first record: we rehearsed very little, discussed even less ... and the recordings went very quickly - each song was in the can after a few takes at most. Jaki sometimes tried different approaches, but usually found the drum part very quickly." In contrast to the first collaboration, when Robert was still "full of awe" of the Can drummer he reveres, this time things were much more relaxed in the studio, he says. "Jaki even made a few jokes that were really funny - he has a very dry sense of humor."

Although the songs were structurally ready when Coyne and Liebezeit met in the studio, the drummer's artistic contribution was far greater than one might suspect: "Jaki's playing often completely changed the mood of a song. For example, I hadn't imagined any drums at all on 'Guiding Hand' - but after listening and thinking for a few minutes, Jaki suddenly started playing a beautiful, rolling beat that fit perfectly," Robert says - adding, "For me, it was a wonderful moment."

This inspired and harmonious atmosphere is palpable through all the songs. You notice: here two artists have found each other who really have something to give. What role it may play that Robert Coyne's father, the musician, painter and author Kevin Coyne, introduced his son to the music of Can and Jaki Liebezeit as a child? At some point, historians and psychologists may cut their teeth on this. The fact is: the combination between the singer-songwriter and the gnarly drummer works. And it is a gift for all who have ears and even like to use them.

Maybe these lucky ears will hear with "Golden Arc" an album that Robert Coyne himself describes like this: "The music is very peaceful and meditative, but there is also a lot of tension in it, as well as in the lyrics, which are quite dark ... I think this conflict represents my feelings and personality pretty well - and at the end of the day, it might not be a conflict at all."

Robert Coyne is the son of the late 2004 musician, painter and author Kevin Coyne. Among other activities he initially worked as a sideman with his father Kevin Coyne, with Eric Burdon, The Barracudas, The Scientists , Amy Rigby, Spooky Tooth, Sky Saxon, and Chris Wilson of the Flamin 'Groovies, just to name a few.

Jaki Liebezeit, born May 26, 1938 in Dresden, is best known for his exceptional ‘’metronom’’ style of playing; other members of Can have suggested that he sounds as though he is ‘’half-man, half machine’’. Liebezeit provided drums, in his patented ‘’Motorik beat’’, for Michael Rother's late-1970s solo albums. In 1980, he became a member of Phantomband. Later he recorded with numerous musicians, such as Jah Wobble and Philip Jeck, with whom he produced an album for Jah Wobble's 30 Hertz Records, and has contributed drums and percussion to many albums as a guest throughout the years, such as the Depeche Mode album ‘Ultra’ and Brian Eno's album ‘Before and After Science’. Finally, he has worked with Burnt Friedman on the Secret Rhythms albums. Jaki Liebezeit passed away January 22, 2017 in Cologne.