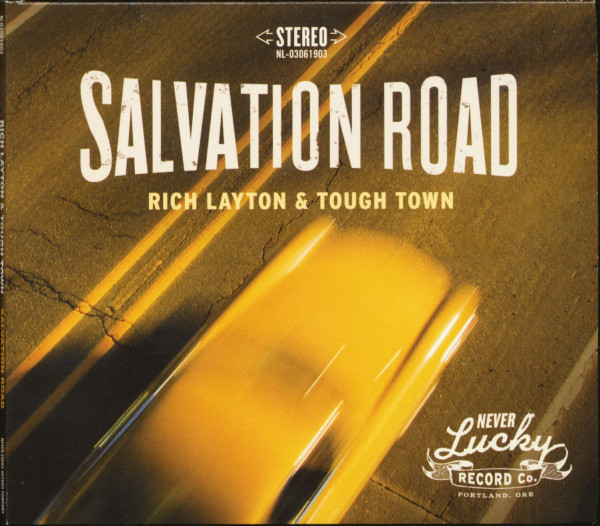 Rich Layton's first album of original songs was very nearly his last. Just six months into worldwide airplay, hitting the charts and hitting the road, it all came to a frightening halt. A mysterious hearing issue left him unable to perform, tolerate noise or even talk on the telephone. Recovery would eventually take more than 18 months, as Rich waited to see if his playing days were over.
When he finally came out the other side of the long ordeal, he wrote "Live to Rock," the hard driving personal anthem that kicks off the return album, "Salvation Road."
RICH LAYTON & TOUGH TOWN
With 10 originals and a psychedelic '60s nugget, Salvation Road is a high-octane trip roaring down two-late southern asphalt. It's The Yardbirds jamming with Johnny Cash... The Stones in Muscle Shoals with Delbert McClinton... Elvis backed by the growl of an amplified harmonica in a Memphis juke joint. Making these influences all his own, Rich Layton leaps from your speakers with the conviction of firebrand rock and roll preacher determined to save your soul - and his.
Band Members: Rich Layton: Vocals & Harmonica Larry McCoy: Guitar Eric "Haus" Krabbenhoft: Bass Charles Pike: Drums
Layton's songs have been described as "mini-movies," and co-producer Terry Wilson gives each track its own distinctive cinematic sweep. With the band's live basic tracks as the foundation, the songs' fully realized arrangements include piano, B3 organ, bottleneck slide, horns, multi layered background harmonies and a 12-string guitar borrowed from John Fogarty. No two songs sound alike, but the band's twang and tremolo vibe pulses at the core of each one.
Special guests include 2019 Grammy nominee Teresa James (vocal duet, Track 5: "Show Me What You're Workin' With"), Portland's godfather of rock and roll, Jon Koonce (lap steel, Track 3: "Raise It Up / Burn It Down") and British rock royalty Chris Mercer (saxophone, Track 1: "Live to Rock").
In a fitting tribute to the ill-fated previous album, Rich and his band "The Troublemakers" took a cue from the fabled Phoenix. The title track of that album, Tough Town, lives again in the band's new moniker.
Rich Layton & Tough Town weaves a swampadelic soundtrack for a last chance Saturday night. Your table waits under the broken neon in a dive bar out on Salvation Road!