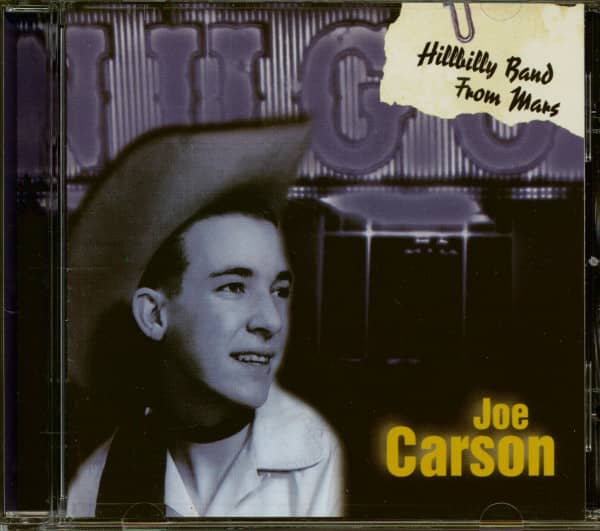 Learn more about Joe Carson
Joe Carson   “He never saw his picture On the album that came out All his... more
Close menu
"Joe Carson"

“I was talking to [Texas country singer] Jason Trevino the other day about Little Joe Carson, and he said, 'I think he was as great a country singer as there ever was.' Well, he's right up there with the best.” 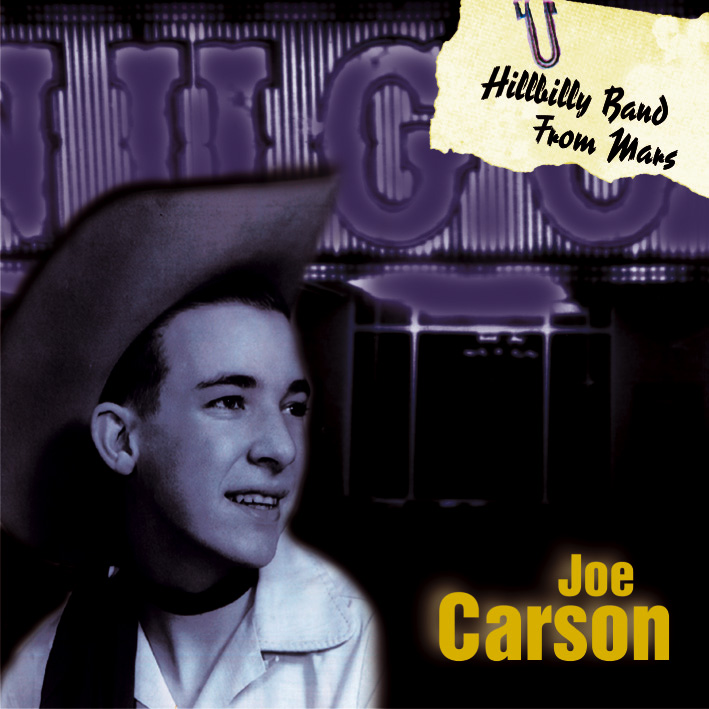 It's hardly an unfamiliar story in American music history: a rising young performer on the cusp of major stardom is tragically killed, leaving huge promises unfulfilled, cutting short not only a life but a career that would have almost certainly proved even more important and influential. Several names come quickly to mind: rock 'n' roll legends Buddy Holly and Eddie Cochran, or western swing pioneer Milton Brown, to name only a few.

Like Holly and Brown, Little Joe Carson was a Texan. Today, Carson, who was only 27 when he died and just beginning to hit it big after more than a decade of paying dues, has nothing like the legendary status of Holly, nor even really that of the lesser known Brown, who has been dead for over sixty-five years. But renown is hardly a measure of talent and those who remember him -- or who have discovered him in the decades since his death in 1964 -- know that Joe Carson was a major talent. One of the best country singers of his generation, he could, some say, have been one of the greatest of all time if everything had fallen into place for him.

The parallels with Milton Brown are strong. Brown was a still-rising star -- the most popular singer in the Southwest leading the most revered and copied band in the region -- when his car flipped over in March 1936 late one evening on a Fort Worth highway. His passenger was killed and Brown was seriously injured, but expected to pull through. He contracted pneumonia, however, and died a few days later. Brown was at a crossroads: newly divorced, with a young son (who would be crippled by polio), he was contemplating some major career moves, including a change of home base from Fort Worth to Houston and an appearance in a Gene Autry movie in Hollywood that would certainly have brought him wider stardom.

Joe Carson might not have been the biggest country music name in the Southwest when he died following a single car accident in early 1964, but he was a definite comer with several recent hits under his belt. After years of almost making it, of not quite getting the attention that his talent unquestionably deserved, he was finally building some serious career momentum. Like Brown, he was also at something of a crossroads. His marriage wasn't on the rocks like Brown's had been, although he and wife Janice had the usual ups and downs of a musician's marriage in their nine years together. But there were other concerns. Carson's recent hits, I Gotta Get Drunk and Helpless, had made it clear that he was ready to be something more than just a regional star. He'd made the decision not to take on longtime associate Billy Gray as his manager and was poised to sign with Marty Robbins' manager Eddie Crandall. It had been a tough decision to make: Gray was a good friend and had supported and pushed Carson from almost the beginning of his career.

There were more pressing concerns, too. Carson's entire backing band had just given notice over a pay squabble. More importantly, Carson's baby boy, Randy, lay gravely ill in a Wichita Falls hospital with spinal meningitis. The singer had a lot on his mind and he’d probably had more to drink than he should have before he drove home that night. The last song he'd sung that night -- the last song he'd ever sing -- was one of his recent Liberty records, The Last Song (I'm Ever Gonna Sing). He'd sung it, unstrapped his guitar, said, “That's it” to his band, and headed out of the Cavalier club without another word. Thirty-six hours later, he was dead.

What makes Joe Carson's death so tragic – beyond the most obvious fact that he was only 27 and left behind a wife and children – is that he was such a prodigious talent. He'd been recording since 1954 and had shown a remarkable maturity even from the start. His early recordings show various influences that shaped him, but by 1964, he'd long since come into his own.

Now, however, the public had caught on, too, had cottoned on to the fact that he was one of the best country singers of the era, one who might have gone on to be one of the major performers of his generation, spoken of without hesitation in the same breath with such names as George Jones and Ray Price. This isn't a romantic notion, fostered by the aura of Carson's tragic death, fuelled by the inevitable what-ifs. Carson was, simply, a great singer and a fine, underappreciated songwriter, who was getting even better when he died.

From the first notes he sang on record, at age 17 on his own, remarkably assured song I Don't Have A Contract With You, to his last, a moving dead-perfect rendering of the standard Fraulein, Little Joe Carson had that indefinable something. A reassessment of his career has long been overdue and pitifully little of his legacy has been reissued over the years, but Bear Family has remedied that at last with this collection, which gathers all of Carson's commercial recordings from 1953 to his death. It includes not only every commercial release, for Mercury, Capitol, D, and Liberty, but also includes an unissued master from his final session and two songs he cut as an audition prior to signing to Capitol in 1956.

“From the time that he was just a kid

He could wail a country tune
He was born to be a singer
And everybody knew
One day he would hit it big
It would all come in time
But the road he took up to the top
Would be no easy climb.”

Little Joe Carson was born Joe Franklin Carson to Henry Monroe and Jo Carson on November 21, 1936 in Holliday, Texas, a small town near Wichita Falls in northwest Texas. He was the last of nine children, the sixth son, seven years younger that his closest sibling, J. M. His parents split up when he was young and he was reared by his mother in nearby Brownwood; his father (known by his middle name Monroe) moved into Wichita Falls, where several older brothers also moved.

The Carson family was a musical one – “We all sang,” says brother J.M. – although none besides Joe would pursue music as a profession (J. M. would give a music career a half-hearted stab after his younger brother's death). Both parents, in particular, loved music and sang, but it was probably his mother Jo who really passed on the talent -- and love -- for music to her son. Whatever the case, Joe became seriously interested in music while quite young and by his early teens was making guest appearances with area bands. In 1951, he travelled to Dallas to enter a talent contest at the new Bob Wills Ranch House. He came in second, winning a $50 bond, losing out to another precocious talent, Darrell Glenn, son of veteran bassist Artie Glenn. Glenn would make his recording debut soon after, singing his father's I Won't Be Back Tonight on a Wills MGM session in Dallas. In 1953, he became a star with his recording of his father's song, Crying In The Chapel.

Carson may not have won a recording contract, but the experience did serve to push him closer to turning pro. He continued to gig around Brownwood and among the bands he undoubtedly sat in with were Hamilton's Texas Wranglers. A decade later, he would cut a song by the band's fiddler, Bobby Swinson, Three Little Words Too Late. By early 1953, now 16, he was appearing daily on KCNC in Fort Worth with the Bayou Valley Folks and Jimmy Blanton. He'd also caught the ear of the guitarist-bandleader at the Southern Club in the bustling, wide-open military town of Lawton in southwest Oklahoma, Tommy Allsup.