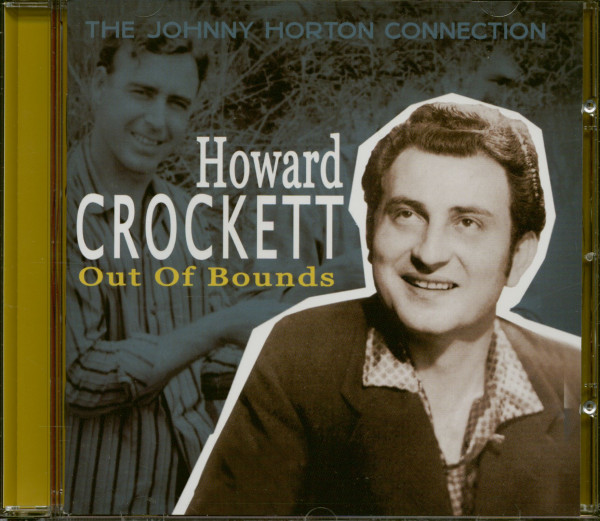 Howard Crockett: Out Of Bounds - The Johnny Horton Connection (CD)

He didn’t have many hits as a singer, but Howard Crockett wrote Honky Tonk Man, Ole Slew Foot, Whispering Pines, and All Grown Up. All Johnny Horton hits. On the strength of Honky Tonk Man, he signed a contract with Dot Records, and this CD includes all his Dot/Hamilton recordings together with the legendarily rare Manco singles, as well as the never-reissued-until-now Smash recordings.
Serious rockabilly collectors have long been aware of Howard Crockett. With this CD, everyone can now appreciate a true original talent in the same vein as Johnny Horton and Johnny Cash but with a style all his own.

THE MAN OF MANY MOODS 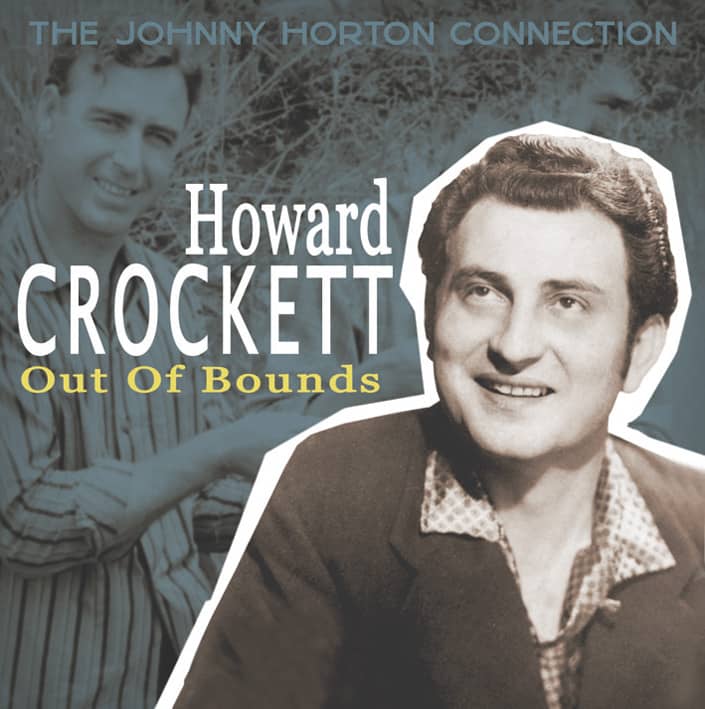 Classic lyrics known to every rockabilly fan and many country fans. They were written by Howard Hausey, also known as Howard Crockett, who became a cult favorite among hard country music fans in Europe after some Swedish record collectors discovered him in the mid-1960s. He didn't have a hit record in Europe as a singer, but, in addition to Honky Tonk Man, many fans knew him for Ole Slew Foot, Whispering Pines, and All Grown Up. All Johnny Horton songs and all Howard Crockett compositions. As a recording artist, Howard's only success came in 1973 when Last Will And Testimony (Of A Drinking Man) reached #52 on the American country charts. Around that time, Swedish record collector Claes Olofsson made contact with Howard, and did an interview in which Howard talked about his career to that point:

"My biggest break as a singer was 'Last Will And Testimony (Of A Drinking Man).' After five years of retirement I was convinced I could not sell records as an artist. I had been labeled as too close to Johnny Cash, or to Johnny Horton and I had begun to believe it after all the years. A friend and long associate, Jim Webb of Hawks Productions, came to me with a proposition and I signed with him in January of 1973 to produce some material on me. We cut a session which in our opinion was not hit material. We went right back into the studio, canned the first session, and cut the hit record on our first release. It was on America Records and we broke it locally. Then Jim leased it to Dot and that is where we are now. We have some great material lined up which we hope will have the same impact. If nothing else I think I have won a mental victory over my fears of not being able to sell records. As you know, it did real well in a number of markets. Some did not play it because it did not fit their programming.

I guess it was not sweet enough. But it was a gut-bucket hit in the areas where it was played, especially to jukeboxes. It was sold in areas to jukebox operators where we did not receive one airplay."

This collection cuts off before Howard's one and only hit as a singer, and we mention it only because, at the time of interview, he had been a recording artist for sixteen years. We're featuring the recordings from the first six years of his recording career, and we begin our story before that.

Howard Elton Hausey was born on December 25th, 1925 in the tiny north Louisiana settlement of Yellow Pine, a few miles from Minden. His parents made their living as farmers and sharecroppers. Besides Howard, the Hauseys had a daughter, Irene. Howard became a good baseball prospect, and was discovered by Larry Hunter who owned a Coca-Cola bottling plant in Minden and ran a baseball team. When Howard was twelve, Hunter hired an ex-professional baseball player to teach and train him. By 1942, when Howard was seventeen, talent scouts were coming to see him play, among them one from the Brooklyn Dodgers. Howard wound up playing for the Dodgers organization as a pitcher. He had – as he puts it – a good career in baseball when an arm injury forced him out.

After a short stint with the U.S. Navy, Howard turned to music and began writing songs in earnest. He had a talent for writing poems, some say it was as easy for him to compose as for someone else to read the morning paper. Howard said that How Far Is The Nearest Star was his first song. His friends encouraged him to place his songs with name stars. In late 1955 or early January 1956, he went to the Louisiana Hayride. Howard recalls:

"I had written three songs: 'Honky Tonk Man' and two ballads, one of them being 'How Far Is The Nearest Star,' and a guy came by and he kept trying to get me to go to the Louisiana Hayride. Finally I told him I'd go, so we went. The first person he introduced me to was George Jones who was in a hurry. He then introduced me to Billie Jean Horton, who was the wife of Johnny Horton. She introduced me to Johnny and we went backstage. I sang him two or three ballads but he was looking for something uptempo and I did him 'Honky Tonk Man,' and he liked it and called his manager Tillman Franks. Johnny learned the song right there, then he took it to Nashville and recorded it."

Howard gave one third of the song to Horton and another third to Franks in order to get it recorded, although Franks says that he earned his share by refashioning a melody that was originally too close to George Jones' Why, Baby Why. "Johnny came to my house with a copy," Howard recalled. "I had no record player so I couldn't play it. I took it to a lady who had a jukebox where we played it. The story got around that she had it and I really had trouble getting it back." He also claims to have written One Woman Man and given it to Horton and Franks on the condition that Horton continued to record songs by him. Franks claims that he and Horton wrote the song, although it's not especially original, as it features new lyrics to a dance tune, Schottische In Texas.

On the strength of Honky Tonk Man, Howard moved to Texas: "I had a chance to be on the Big D Jamboree,"  he said. "That was as big show back then in Dallas and that's how I came to Texas. I liked Fort Worth and moved there.

I believe the year was 1956 and at that time I was doing 'Honky Tonk Man' and 'One Woman Man,' and songs like that on  stage." On Horton's next session, they recorded another Howard Crockett composition, Sugar Coated Baby, but it wasn't released until later. Howard also tried to land a recording contract. "It started with a tape that I had sent to Acuff-Rose," he said. "Mac Wiseman had just become the new A&R man for Dot Records. He heard me and he liked my voice because it was deep, and in fact he made a comment that it sounded like a young Ernest Tubb. He got in touch with me at the radio station here and they signed me to Dot Records."

Mac Wiseman remembered signing Howard. "I was living in California at that time producing for Dot Records,"  he said recently. "I can't remember if I met him in California or Nashville. Probably Nashville. I know I was instrumental in changing his name. Being from Texas, I thought 'Crockett' was more appropriate than Hausey. He was a big hunk of a man. Had to carry two clubs to keep the women off. I liked him, but he could be a tricky booger. After he left Dot, he came to Nashville pitching songs. He gave three publishers an exclusive on his songs, and got a deposit from each one. He never pulled any skullduggery on me that I know of."

Write an evaluation
Evaluations will be activated after verification.
Weitere Artikel von Howard Crockett
Howard Crockett: The Many Moods Of The Mysterious Howard... Art-Nr.: CDOMNI189 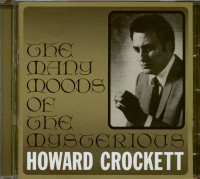