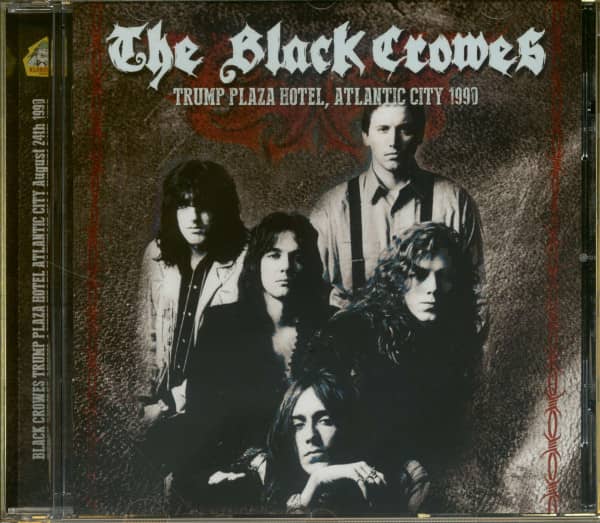 The Black Crowes entered the Trump Plaza Hotel in Atlantic City to be greeted by a crowd of hugely enthusiastic and inspired onlookers who wanted a taste of qualified southern, R&B, boogie rock and that is indeed what they got. Riding high on their acclaimed debut album Shake Your Money Maker, the spirited Georgia rockers paid homage to rock 'n' roll history with an explosive set that crowned them kings of southern rock.

Aside from a blistering onslaught of authentic pomp that takes us through their debut album, the Crowes' light up the stage omitting the hit single She Talks To Angels from the set list, a confident move that confirms the band's belief and authority. Klondike proudly presents the entire 24th August 1990 performance by the Black Crowes from the Trump Plaza Hotel in Atlantic City

Georgia rockers, The Black Crowes came together in the mid—'80s with founding members (and brothers) Chris and Rich Robinson solidly at the core. Over the course of their tumultuous career, The Black Crowes have gone through a series of line—up changes and even the Robinsons are renowned for their periodic, bitter disagreements and sibling rivalry. That aside, by the end of the decade, the Crowes had signed with American Recordings (then called Def American) to release their debut Shake Your Money Maker.

Coming early in 1990, The Black Crowes' debut clearly established the band's musical vision and defined their homage to the roots approach championed by acts such as the Rolling Stones. Preferring a stripped—down, sexy sound that combined R&B, blues, arena rock and boogie, Shake Your Money Maker came along at a time when alternative rock would attempt to disregard the notion of rock as a place for rocking, soulful good times. The Black Crowe.s stood in opposition to that and while sangs like She Talks to Angels were undeniably sombre, the band exulted in a cocky rock 'n' roll attitude. Rolling Stone's David Fricke aptly dubbed their debut "a guitar—party cracker that marries white Southern R&B crunch and Anglo cock—strutting attitude in the beloved early—seventies manner of The Faces and The Rolling Stones.

They had evidently grasped the appeal and simultaneously, the yearning for plain and dirty old school rock, which would grace their promotional tour in 1990. They would eventually tour the U.S. and Europe, opening for Heart, Robert Plant, Aerosmith, and ZZ Top, the latter of which, would become a notorious episode for the band being kicked off the tour, but a move that served the band favorably and prompted Chris Robinson to defiantly state in front of a 16,000—strong hometown crowd: "Don't tell me what to say, just kick us off'. Tour sponsors Miller Lite were enraged and promptly obliged by kicking them off the tour much to the sadness of ZZ Top.

The Black Crowes entered the Trump Plaza Hotel in Atlantic City to be greeted by a crowd of hugely enthusiastic onlookers who wanted a taste of qualified southern, R&B, boogie rock and that is indeed what they got. The band salute their British R&B heroes with a charged rendition of Honky Tank Women, their first recorded performance of this. Aside from a blistering onslaught of authentic pomp that takes us through their debut vinyl outing, the Crowes replace three songs from the album with Kick The Devil Outta Me, You're Such A Pity and the aforementioned Stones' tribute. Their confidence allows them to drop the hit single She Talks Ta Angels from the set list, a major gaff in the eyes of spr tour Sponsor, but the Crowes had little time for the commercial exploits of corporate sponsorship, a point that would be proven decisive a year later on tour with friends, ZZ Top.