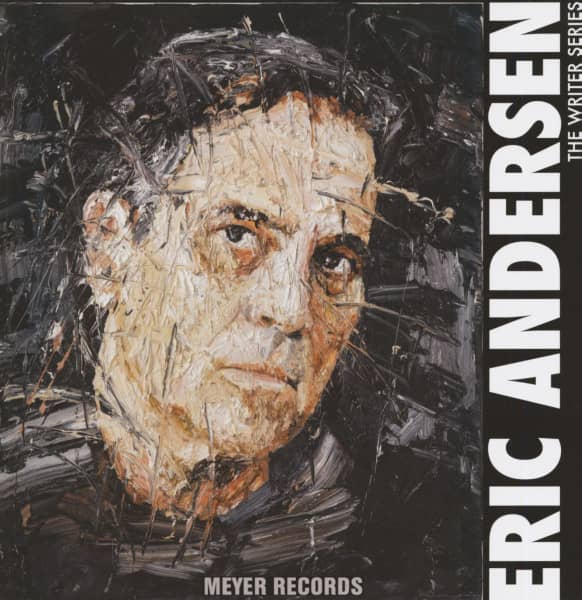 (Meyer Records) 3-LP (180 gram, 12" (30cm) box set (slipcase), with poster & autographed card. 24 tracks, total playing time approx. 117 min.
„Had the punk scene existed in 1812 Lord Byron would have easily claimed the mantle as the First Bad Boy of Rock for having created the original blueprint of a sex, drugs and rock 'n' roll life template that would pave the way for rebels to come like Arthur Rimbaud, William Burroughs, James Dean and Jim Morrison.“
-Eric Andersen
Werner Meyer has bundled Eric Andersen's three exquisite albums for his label, Meyer Records -- which grew up in Cologne and recently moved to Husum in North Frisia, Germany -- in this special, deluxe edition. 'The Writer Series' is available as a 3-CD set as well as on three perfectly recorded and mastered (DMM mastering by Günther Pauler) audiophile and heavyweight vinyl records. Packed in an elegant slipcase, the vinyl version in particular has all the makings of a classic and is a landmark release for one of the greatest American singer/songwriters and poets, even in his lifetime!

Eric Anderson’s voice, songs, guitar and piano playing created a career that has spanned over 55 years. He has recorded 25 albums plus of original songs, and made numerous tours of North America, Europe, and Japan. His first album on New York’s Vanguard label was released in 1965. His songs have been recorded and performed by world renown artists such as Ricky Nelson, Judy Collins, Sandy Denny, Fairport Convention, The Kingston Trio, Peter Paul and Mary, Linda Ronstadt, Johnny Cash, The Grateful Dead, Linda Thompson, Mary Chapin Carpenter, and Francoise Hardy, plus many others in Europe, Australia, England, and Japan.

Eric Andersen is widely regarded as one of the most poetic songwriters that sprang from the Greenwich Village folk scene of the 1960’s. As a musician, he defies categorization. His artful mélange of love, despair, hope and stirred memory has earned him a passionate international following and the respect and admiration of artists ranging from Joni Mitchell and Leonard Cohen to Lou Reed and Wyclef Jean. For Andersen, every big break seemed to be followed by crushing disappointment.

The premature death in 1967 of his newly acquired manager, legendary Beatles’ mastermind Brian Epstein, took a toll. But six years later, one of the most baffling events in the history of contemporary music occurred—a career-changer that still haunts Eric from the shadows. In 1973, during a corporate shakeup at Columbia records, 40 master recording tapes for a highly anticipated release mysteriously and inexplicably disappeared. Never before or after has a record company lost a complete album. Although the tapes resurfaced 16 years later, his career had been forever altered by the event—no plausible explanation has ever been given.
Press:
''Andersen is the most elegant of singers. He is powered by the singular mix of irony and high romanticism that fuels his classic work.''
Paul Evans, Rolling Stone Magazine

''A singer and songwriter of the first rank.''
The New York Times

''This is a disc to discover and enjoy, meant for the discerning palate, more suited, perhaps, to the autumn-winter season than the hubris of summer, that season of vulgarity and display, with its flip-flops and the coconut smells of sun creams. This ambitious work in the great tradition of folk music is deeply embedded in the cultural roots of literature, staking its claim to be regarded as one of the best recordings made in the considerable fifty-year career of a songwriter I have always loved.''
Gianni Zuretti, Buscadero (Italy) - translated into English by Marco Fazzini

''Bryon would have been a part of the Phil Ochs, Bob Dylan., Tom Rush, Tom Paxton, Eric Andersen group of brothers creating music that would last a lifetime.''
Don Graham, Canadian Review 2017

''As his peer and friend, Bob Dylan, wins the Nobel Prize for Literature and spends his time in the studio exploring the American Songbook, Eric Andersen has been opening the dusty windows and unread book shelves of philosophers and poets of history. He calls them back to life through a passionate and relevant haunt that reaches out to us. It is not a horror kind of haunting, but a gentle and seductive one.''
Terry Roland, No Depression