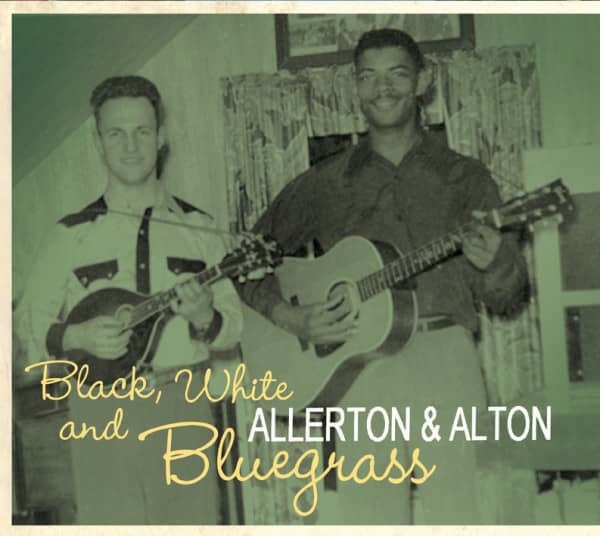 Sometimes people who make music history have no idea they're doing so at the time. Bear Family Records has uncovered just such a case and will proudly be releasing this rare and previously undocumented piece of country music history in November 2010.

You can count on one hand the number of African American country music performers who recorded prior to the mid-1950s. Early Grand Ole Opry star Deford Bailey comes to mind because of his unique status as an instrumentalist. Indeed, the Country Music Foundation treats him as the historical oddity that he was. Jimmie Rodgers used Louis Armstrong's cornet on a 1930 session, but it's a cinch the two men never sang together. Black and white country duets are as rare as hen's teeth during this period. In fact, they may be altogether unknown.

Now Bear Family Records has found one. In several months we will proudly release the historical recordings of Allerton & Alton, The Cumberland Ridge Runners. They are perhaps the first interracial country music duet. Their performances dating from the late 1940s/early 1950s were broadcast over radio station WLAM in Lewiston, Maine and heard throughout the Northeast and parts of southern Ontario, Canada. The story of how these two country music fans met while browsing old 78s is as fascinating as their recordings. Perhaps the most amazing part of their story is the utterly unself-conscious way with which they approached the racial aspect of who they were and what they were doing. Equally compelling is the story of how the Korean War put an abrupt end to this interracial duo, after Alton returned a changed man, having experienced the cruel realities of a segregated U.S. Army.

This release will present their music in typical Bear Family style: lavishly illustrated with vintage photos, full historical notes and as many digitally restored recordings as we can fit on a CD.

Learn more about ALLERTON & ALTON
It's often true that people who make history are unaware they're doing so at the time.... more
Close menu
"ALLERTON & ALTON"

It's often true that people who make history are unaware they're doing so at the time. Consider Allerton & Alton. Very few know their names as the 21st century rolls along with hardly a backward glance, absorbed in its own popular culture1. Allerton & Alton sang country music in an era when country music hadn't yet shaken free of most of its roots. There were no slick Nashville productions and the word "countrypolitan" hadn't yet been spoken. Country music was still largely a niché market and proud to be so. You could count the number of cross- over hits on one or two hands, although a late 1920s ad from Columbia Records for Gid Tanner and Riley Puckett showed early hopes of a broader market, claiming "The fiddle and guitar craze is sweeping Northward."

Allerton & Alton sang what today would probably be called 'mountain music.' Others might call it the 'roots of bluegrass.' Their performance style was rooted firmly in the tradition of 'Brother acts,' a highly successful duet style that took root in the late 1920s and continued well into the 1960s. The earliest examples include Earl & Bill Bolick, known as the Blue Sky Boys; Bill & Charlie Monroe; J. E. & Wade Mainer; the Bailes Brothers; the Dixon Brothers and the Shelton Brothers. The early tradition continued with the Delmore Brothers; the Osborne Brothers; Jim & Jesse; Johnnie & Jack (who were actually brothers-in-law); the Louvin Brothers and the Wilburn Brothers, whose TV show (1963-1974) brought the genre to an even wider audience.

The list is long and the style actually overlapped into popular music with the 1950s success of the Everly Brothers, whose country roots were unmistakable. That Allerton & Alton were part of the duet harmony tradition might not cause a blip on the radar if it weren't for one thing. Well, two things if you count the fact that they were from Maine, which has never been a hotbed of country music. But setting geography aside, the unique thing about Allerton & Alton was the simple fact that Alton Myers was an African-American. The very fact that he was singing songs from the rich tradition of white mountain music was a little bit odd. But the fact that he was singing these songs as duets with a white man renders the story unique, to say the least.

Their recordings from the late 1940s and early 1950s are singular events in country music history. These performances were heard over the airwaves, but the recordings have never been commercially released until now. In fact, they were thought lost, relegated to a footnote in the history of country music, about which little tangible evidence remained. Fortunately for us, these recordings have been found. Equally fortunate is the fact that Al Hawkes (Allerton of the duo) is here to tell their story and share his memories of this most unusual episode in country music history.