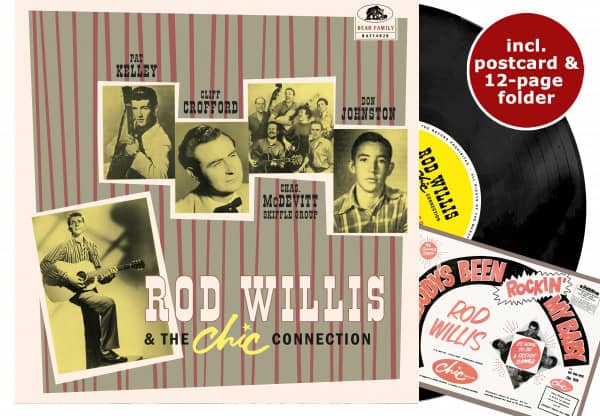 1-LP 10inch vinyl, booklet and postcard enclosed, 12 tracks. Total playing time approx. 28 min.
Bear Family Records® presents on this 10inch vinyl LP the Chic Records catalog from a Georgia-based label founded in 1956.
After about a year it was over again - but a great rockabilly legacy justifies this splendid release.
Included are the 1957 singles Somebody's Been Rocking My Baby by Rod Willis and hot rockers by Pat Kelly, Don Johnston, and Cliff Crawford.
Under license, Chic Records released Freight Train by the British Chas. McDevitt Skiffle Group in the U.S., a financially successful coup.
Superbly remastered recordings, a stylish LP cover and an in-depth essay on the subject by Chicago expert Bill Dahl in the accompanying booklet round out this fantastic collector's LP!
Thomasville, Georgia was a bit out of the way for a record company seeking national exposure to establish its headquarters, but that didn’t stop Chick Thompson from situating his self-named Chic Records there in the summer of 1956.
The diskery only existed for a little over a year but release several first-rate rockabilly platters—and they’re all aboard ‘Rod Willis & The Chic Connection.’
Willis was one of Thompson’s premier acts; his 1957 single Somebody’s Been Rocking My Baby, waxed in Nashville with the vaunted A-Team in support, ranks with Chic’s hottest rockers (his ’59 NRC single is also here, both sides penned by Thompson).
Chic entered the big leagues by snagging the U.S. rights to the British skiffle smash Freight Train by The Chas. McDevitt Skiffle Group Featuring Nancy Whiskey and thus scored its only national hit during the spring of ’57.
It’s on this collection too, as are fine rockabilly outings by Pat Kelly, Don Johnston, and Cliff Crawford (better known under his legal surname of Crofford).
In a brief timespan, Chic Records built an impressive rockabilly legacy given first-class treatment on this splendid LP.

Born Rodney Earl Willis on August 14, 1934 in Milton, Santa Rosa County, Florida, he learned his first guitar chords from his mother Edna. She passed away when he was only nine years of age, but family friend Will Levins continued his instruction on the instrument. During his years of attending Milton High School, Willis entertained his friends by playing guitar and harmonica. Rod graduated from high school in June of ’53 and immediately joined the Marines for a three-year hitch that he spent some of in Japan, finding time between military maneuvers to play in a band that included some Elvis in its set list.

Back stateside in San Francisco after mustering out, Sgt. Willis hitchhiked for three days to get home to Florida. He enrolled at Florida State University and formed a band he called The Alley Cats with electric guitarists Richard Vander Linde and Big John Taylor, Willis fronting the band vocally and doubling on rhythm guitar. They entered a talent contest and caught the ear of Chick Thompson, who brought Willis to Nashville in early 1957 for his first session at Owen Bradley’s famous Quonset Hut. Music Row’s vaunted A-Team—guitarists Hank Garland and Grady Martin, bassist Bob Moore, drummer Buddy Harman, and The Anita Kerr Singers--were on hand to provide their usual impeccable backing.

Chick wrote Somebody’s Been Rocking My Baby for Rod and he responded with a strong vocal abetted by immaculate guitar work and cute banter between Rod and an unbilled female (Anita, perhaps?). A hip recasting of Louis Armstrong’s 1935 Decca waxing of Old Man Mose was its discmate; the unusual minor-key glide of the piece brought out the best from the band, Rod sounding as though he really enjoyed bouncing off those “buck-buck-buckets” supplied by the backing chorus. Thompson purchased a two-page layout in ‘The Cash Box’ that July to spread the news about Rod’s debut single. There was another ad dominated by a photo of an acoustic guitar-wielding Willis complete with a coupon inviting readers to apply for membership in his fan club.

Despite spending the summer of ’57 touring the East Coast to promote the record, Somebody’s Been Rocking My Baby failed to dent the charts. It surely didn’t help that a scheduled September 18, 1957 appearance on ‘American Bandstand’ never took place. But those misfortunes didn’t deter Willis from hooking up with Thompson again in a studio in the later stages of 1958. Chic was out of business by then, but Thompson had joined the front offices of Bill Lowery’s NRC (short for National Recording Corporation) Records in Atlanta. Lowery had formed the logo in March of ’58 after distinguishing himself as a top country deejay, music publisher, producer, and label owner around his Atlanta homebase.

This time Willis sang two of Thompson’s compositions. The echo-bathed intro to The Cat was eerie, loaded with sound effects and sway bar-soaked guitar chords that rendered it perfect for haunting Halloween spins. Even after it detoured into red-hot rockabilly territory with a scalding guitar break that was possibly by Big John Taylor, there were bizarre shenanigans underway—humorous break-ins and some jokester with a British accent commenting on the action. Big John and Chick teamed to pen the B-side, Will Travel, a tough guitar-driven chopper that avoided the humorous aspects of its plattermate. The 45 came out on NRC in early 1959, though Houghton indicated that Willis was unaware of its release at the time.

That was it for Rod’s recording career. He earned a bachelor’s degree in business in January of 1962 and landed a job the next month with the state of Florida. Over the next three decades, Willis worked in the governor’s budget office as well the state’s labor department. He died June 27, 2013 in Tallahassee at the age of 78.

This product will be released at 2 December 2022