The greatest-ever tribute to the man they called 'Duke' on the thirtieth anniversary of his death! John Wayne is gone but not forgotten - he is still among the Top Three most popular movie actors of all time.

The soundtrack music to his never-to-be-forgotten westerns!

All the title songs by the original artists!

Songs inspired by the movies!

A 464-page LP-sized book with a biography by historian Richard W. Bann, AND Reproductions of hundreds of his western movie posters from many different countries!

A bonus DVD with trailers and exclusive 'behind-the-scenes' footage! A man and an actor as big as John Wayne deserves a tribute like this!

John Wayne was America. And America ...in fact, the entire world... has not forgotten John Wayne. Thirty years after his death, the man known as 'Duke' still ranks among the Top Three most popular American film stars of all time. More than any other actor, he chose roles that glorified traditional American values and would not compromise his personal image. 'Don't apologize,' he said in 'She Wore A Yellow Ribbon,' 'it's a sign of weakness.' That was John Wayne, and that's the John Wayne celebrated here in the music and poster art from his many memorable western movies.

This 10 CD-album Box Set + 1 DVD collection contains the rousing soundtracks of his best-loved westerns, including 'The Searchers', 'The Alamo', 'The Sons Of Katie Elder' and 'True Grit'. The artists performing the original soundtrack songs include the Sons Of The Pioneers, Glen Campbell, The Limeliters, Ed Ames, Johnny Cash, Marty Robbins, and many more. Plus! bonus songs inspired by John Wayne's movies, such as Frankie Avalon's The Ballad Of The Alamo, Gene Pitney's The Man Who Shot Liberty Valance, and Claude King's The Comancheros. The bonus DVD contains trailers and exclusive behind-the-scenes footage!

This CD-album Box set contains a 464-page hardcover collector's edition book (LP-size) that includes a biography of John Wayne by acclaimed movie historian Richard W. Bann AND several hundred posters, lobby cards, and stills, reproduced in lustrous color. The artwork captures the boldness and daring of John Wayne's West. The posters are from the USA and many other countries, including Argentina, Japan, Australia, England, Germany, Belgium, France, Spain, Italy, and Sweden. This is by far the most comprehensive-ever collection of the evocative music and art that accompanied John Wayne's western movie classics! Soundtracks are included from the following movies: 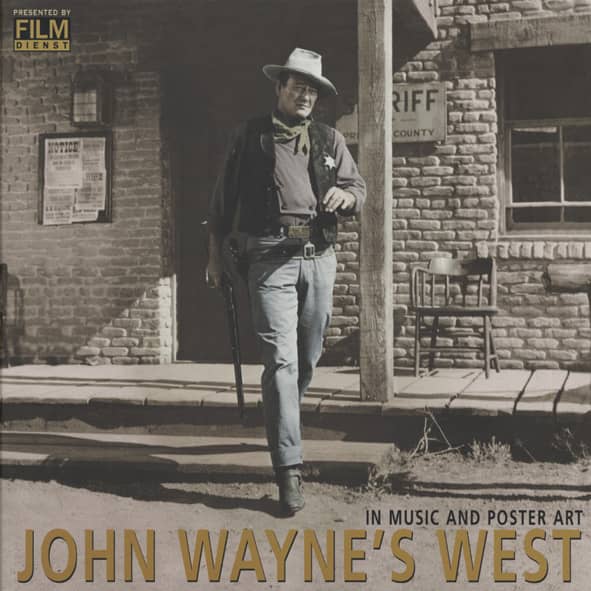 'tomorrow is the most important thing in life' ...John Wayne

Awesome remastering! 60's and 70's titles sound like 2016 (older titles do not sound as good but surely better than they never did)! Music and songs from more than 65 classic westerns! The rarest tracks as bonuses (alternate studio, movie versions, covers)!
As of the book : most beautiful movie book I ever saw! Period! Deluxe paper and poster reproductions are just works of art...
My first Bear Family box set, surely not the last!

To all concerned,
I just received my \JOHN WAYNE'S WEST\" and I am absolutely thrilled.
ABSOLUT FANTASTISCH!!!
Credos to all who worked on this, they need a raise!
I've been trying to find recordings of songs from my favorite John Wayne/John Ford films for I don't know how long, and this is it. And I can't tell you how I stumbled onto it. But what a collection!! Absolutely fantastic!!!