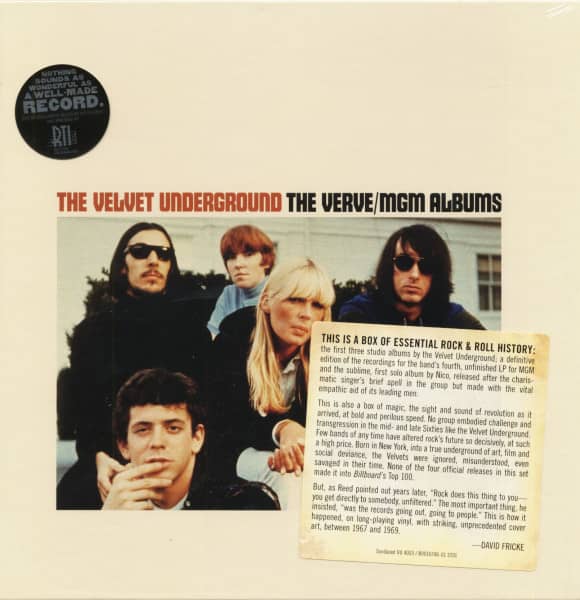 P Secure bonuspoints now
Description
Learn more about The Velvet Underground
Review 0
Description
At a time when the Rolling Stones were forbidden from singing about spending the night together... more
Close menu

At a time when the Rolling Stones were forbidden from singing about spending the night together on national television, the Velvet Underground was crafting songs about such taboo subjects as illegal drugs, sadomasochism and black angels of death. And that was just on their debut. Throughout their first three albums, VU continued to challenge societal norms through their lyrics and rock music itself through their unorthodox instrumental approach. Their sound was theirs alone, which proved to be an obstacle when it came to sales. The majority of popular music fans simply weren't ready for the bleakly beautiful vision of VU. But for those who were, this LP trilogy was a clarion call, drawing together the outsiders who felt disenfranchised and unfulfilled by Top Forty fodder. Like time release capsules, these LPs became catalysts for change as they spread from city to city and were consumed by adventurous listeners. Bands formed, scenes coalesced and new musical paths emerged which would eventually branch off into punk, alternative, indie and more. Take a sample from any underground music genre and you're likely to find VU DNA pulsing through its core.

As the alternative scene grew, so did the legend of the Velvet Underground. However, with relatively few of the original LPs in circulation, finding them could be difficult and, as a result, more people had probably heard OF the band than had actually heard their music. The emergence of compact discs in the mid-80s, along with a groundswell of VU-influenced bands singing their praises, finally got their music into wider distribution. Yet, for vinyl enthusiasts who longed to place those precious albums on their turntables, that thrill remained elusive.

Until now. With tremendous pride, Sundazed presents The Velvet Underground: The MGM/Verve Albums. This beautiful, deluxe boxed set gathers the rare mono versions of the band's first three studio albums along with the superior mono version of Nico's Chelsea Girl and a definitive edition of the band's unfinished fourth album! Sourced from the original Verve/MGM analog reels and mastered by Bob Irwin, this collection is an essential purchase for the discerning vinyl devotee. For all tomorrow's parties, this is your soundtrack.
The ultimate collection of underground rock's big bang!

Includes the rare mono versions of the VU's first three albums, the superior mono version of Nico's Chelsea Girl (featuring Reed, Cale & Morrison) and a definitive edition of the band's unfinished fourth album!
Housed in a beautiful deluxe box with all original LP artwork along with two bonus poster inserts!