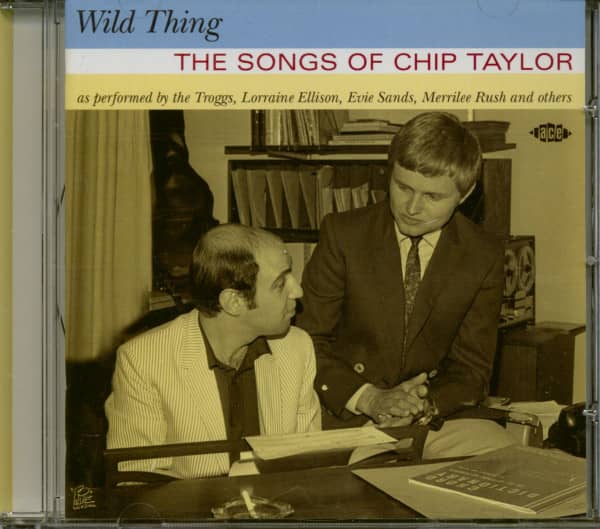 Chip Taylor is the subject of the latest addition to our songwriter-based series. He can boast two career songs – ‘Wild Thing’ and ‘Angel Of The Morning’ – both of which have been recorded countless times and are considered to be among the greatest of their decade. Chip’s collaborations with Ted Daryll, Al Gorgoni, Jerry Ragovoy, Wes Farrell and Billy Vera are no less revered. When Aretha Franklin, Dusty Springfield and Peggy Lee record your songs, you know you’re doing something right.

The Troggs open our show with ‘Wild Thing’. The song is indelibly associated with Reg Presley and his cohorts, but Chip was commissioned to write it for the Wild Ones. He doesn’t care for the original, “They took the power of the song and diminished it,” but loves the Troggs’ recording, “A right funky record. You couldn’t beat that. It was like my demo, except they played it with an electric guitar.” (Find the Wild Ones’ version on our recent collection “You Heard It Here First” CDCHD 1204.)

To many the most significant recipient of Chip’s compositions is Evie Sands. “She had this honey voice that was one of a kind. How could you ever not love that, every minute, working with her, rehearsing with her, producing her.” Given half a chance we’d have filled this CD with her tracks, but had to narrow the choice to just two – the feisty ‘Run Home To Your Mama’ and her stunning original of ‘I Can’t Let Go’. Three others represent her by proxy: ‘Picture Me Gone’ (in a splendiferous version by Madeline Bell), ‘Angel Of The Morning’ (Merrilee Rush’s hit rendition) and ‘Any Way That You Want Me’ (Evie’s breakthrough song, heard here in a recording by Tina Mason from three years earlier).

All but three of our selection were recorded between 1964 and 1968. Closing the proceedings are three of Chip’s most important 1970s compositions: ‘Son Of A Rotten Gambler’ by the Hollies, ‘Blackbird (Hold Your Head High)’ by black country singer Stoney Edwards and Chip’s own recording of the autobiographical ‘(I Want) The Real Thing’. Chip can also be heard as Kathy McCord’s uncredited singing partner. Other highlights include Lorraine Ellison’s ultra-soulful ‘Try (Just A Little Bit Harder)’, the delicious ‘Make Me Belong To You’ by Barbara Lewis, the original demo of ‘Storybook Children’, sung by its co-writer Billy Vera with Nona Hendryx, and Walter Jackson’s version of the oft-recorded ‘Welcome Home’, one of Chip’s favourites.

The booklet includes a 7,000-word essay, much of it in Chip’s own words. He comes across as not only one of the greatest songwriters in the business, but also one of the nicest guys. If this compilation sparks an interest in his more recent activities, his book Songs From A Dutch Tour, which comes with a disc of new songs, might be the place to begin. To hear some of the tracks he cut as teenage rocker Wes Voight in the late 50s, check out the Ace CD “King of Rock’n’Roll” CDCHD 975. As we go to press we hear that Chip has been ill. We hope that “Wild Thing” will serve as a get well soon card and help speed the recovery of one of the greatest singer-songwriters of the past 50 years. (Mick Patrick)