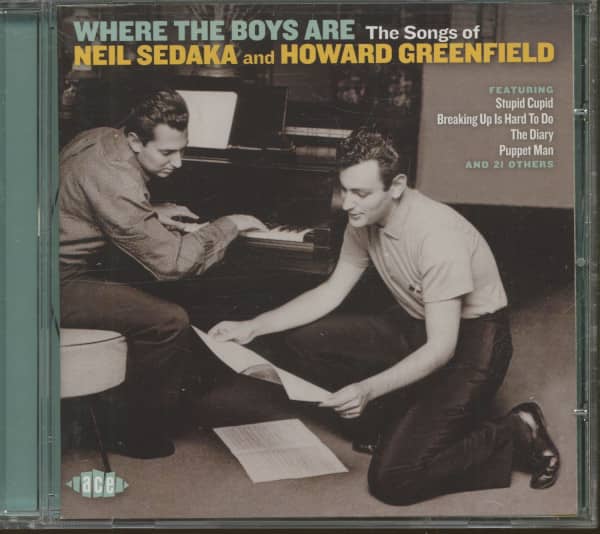 Various: Where The Boys Are - The Songs Of Sedaka And Howard Greenfield

(ACE Records) 25 tracks 1958-69 (63:12) with 28 page booklet. 25 Knockout Tracks Written By One Of The Greatest Teams To Emerge From The 1650 Broadway Hit Factory. 28-Page Booklet Featuring Exclusive Interview With Neil Sedaka Inside

Neil Sedaka and Howard Greenfield were the first songwriters to sign with Al Nevins and Don Kirshner’s Aldon Music. ‘Stupid Cupid’, their initial song for the company, was recorded by Connie Francis. It shot up the charts in 1958 and before long Aldon was the most successful music publisher in the USA, with scores of international hits in their catalogue and a stable of writers that included Gerry Goffin, Carole King, Barry Mann, Cynthia Weil and many of the other top exponents of the day.

In 2005, Ken Emerson published his book Always Magic In The Air, in which he chronicled the lives and careers of seven eminent New York-based songwriting duos of the Brill Building era. Here at Ace Records, we launched our songwriter series the previous year with a collection of tracks penned by Jerry Leiber and Mike Stoller, the book’s main characters. Since then, the series has expanded to include, amongst many others, six of the writing teams featured by Emerson. With this latest edition, which spotlights the songs of Sedaka and Greenfield, the soundtrack of his book becomes complete.

The CD – which also includes a few numbers co-penned by third parties Carole King, Jack Keller, Roger Atkins, Helen Miller and Carole Bayer – comes with a bumper booklet featuring an exclusive interview with Neil Sedaka, who concludes: “Howie Greenfield and I wrote very commercially. Howie was one of the best lyricists in the business. His lyrics were very slick and polished, like tiny, compact novels, self-contained dramas. I think he was very underrated. The critics didn’t like him as much as the public did. The proof of the pudding is in the great two and a half minute songs we mastered. I would usually come with two or three finished tunes. He would choose the tune according to his mood at that moment. I liked to give him a choice. We fought, but we always made up. There were disagreements over phrases or musical notes. I think you have to have those fights. We stayed together for over 30 years. I’m very proud of the many, many songs we wrote together. They’re all my dear children. I still miss Howie a lot.”

Article properties: Various: Where The Boys Are - The Songs Of Sedaka And Howard Greenfield