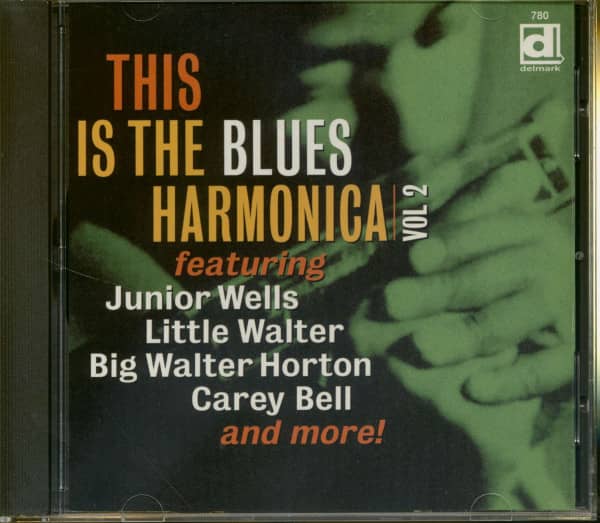 Various: This Is The Blues Harmonica Vol. 2

For some, the harmonica is not much more than an inexpensive plaything, but as the artists heard here amply demonstrate, the expressive range of the harmonica is as deep and wide as any other musical instrument in the blues, rivaled only by the human voice. These are among the very greatest blues players ever to pick up the instrument, from world renowned legends like Junior Wells (heard here on a previously unreleased take), Big Walter Horton and Little Walter, through undeservedly obscure players whose fame barely stretched beyond their own neighborhoods. Featuring the best harp players on Delmark. Contains previously unissued tracks by artists including Shakey Jake (performing with Magic Sam).

AS IS THE BLUES HARMONICAVOL 2 The harmonica - AKA the tin sandwich, the Mississippi saxophone, the mouth organ, the harp. Cheap and portable, it's the most common musical instrument in the world. John Steinbeck rhapsodized its virtues in 'The Grapes Of Wrath', and everyone from Al Pacino to Stan Musial to Abraham Lincoln has played one. These are among the greatest blues players to play the harmonica, from world renowned legends like Junior Wells, Little Walter and Big Walter Horton, through undeservedly obscure players whose fame barely stretched beyond their own neighborhoods. Contains nine previosuly unissued tracks including Shakey Jake with Magic Sam from the West Side Soul recording session!

Article properties: Various: This Is The Blues Harmonica Vol. 2

$18.40
Customers also viewed
This Is The Blues Harmonica Vol. 2