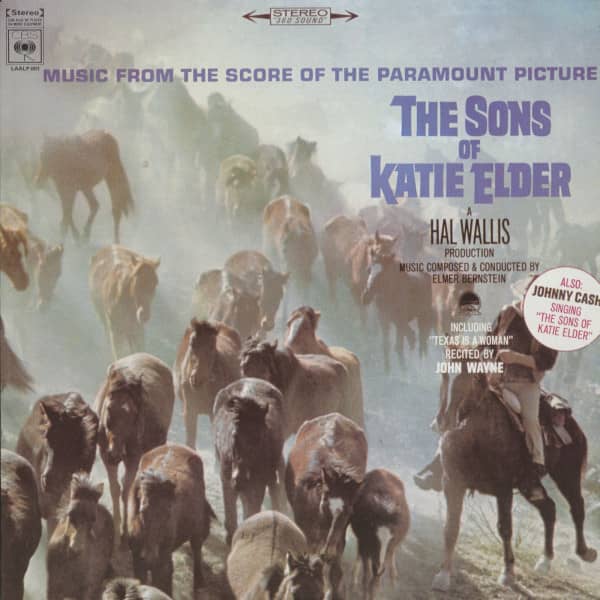 (CBS Australia) 1980s re-issue of this very rare 1965 album - 12 tracks by Elmar Bernstein, featuring John Wayne and Johnny Cash.
This album, containing music from the score of The Sons Of Katie Elder, brilliantly conveys all of the motion picture's dramatic sweep and excitement. The key to success for composer-conductor Elmer Bernstein, one of the most gifted composers for films, lies in the answers to three questions he asks himself before scor-ing a scene: What is the reason for music here? What is the emotion it must express? How can it enhance the dialogue or what is seen? Bernstein, in other words, sub-scribes to the working philosophy that music must fulfill its legitimate function as an essential dramatic element in the film as a whole. Apart from contributing to the pic-ture's total effect, the music when heard by itself pro-vides an altogether captivating emotional experience. A graduate of the Juilliard School of Music, the New York-born composer has won five Academy Award nominations  - for the scores of "The Man With the Golden Arm," "The Magnificent Seven," "Summer and Smoke," "To Kill a Mockingbird" and for the song "Walk on the Wild Side." Other film scores by Mr. Bernstein include "The Carpet-baggers," "Hud" and "Birdman of Alcatraz."