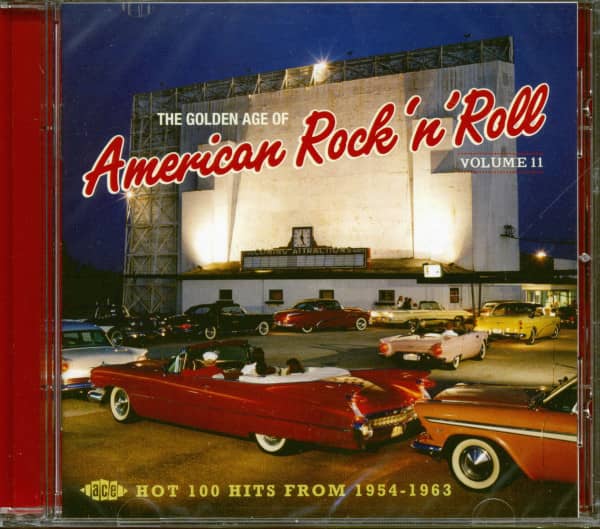 P Secure bonuspoints now
Description
Learn more about Various
Review 0
Description
(ACE Records 30 tracks 1956-62 with 28 page booklet This is a low-key launch for what is a... more
Close menu

This is a low-key launch for what is a big moment in the Ace schedules – the arrival of a new edition of the near legendary “Golden Age of American Rock’n’Roll”, a series which collectively tells the story in sound and vision (well words, actually) of the greatest moments in the chart history of early rock’n’roll.
We know from our mailbox that a great many of you are suffering from mild to serious withdrawal symptoms brought on by a lack of a regular “Golden Age” fix but one might argue that this has made the wait - or the suffering - even more worthwhile.
Weighed down by the burden of expectation, Trevor Churchill and I were so strict in maintaining our exacting criteria, that it has taken even longer than usual to prepare another volume.
One immediately notices the astonishing audio quality. Even if you already have a couple or more of the songs on other CDs, it is unlikely that you will have heard them sounding quite this good, a classic example being the opening tune, LaVern Baker’s Jim Dandy which thumps out of the speakers with age belying power.
As always, several tunes appear here on a legal CD for the first time, among them the intoxicating Miss Fine by the New Yorkers (actually the 5 Satins in disguise), Last Chance by Collay & the Satellites, White Bucks And Saddle Shoes by Bobby Pedrick Jr, Mathilda by Cookie & his Cupcakes, Chills And Fever by Ronnie Love and Bobby Comstock’s rather engaging take on Tennessee Waltz. We have gone to great lengths to track down master tapes where others would have long given up…
As a sidebar, we ought to mention that the version of Peanut Butter by the Marathons heard here is the Argo re-record rather than the more common Arvee version (a lawsuit meant that two marginally different versions of this hit were marketed at the same time). The Argo re-cut has never been issued on CD before and you’ll have fun trying to hear the difference. Co-compiler Trevor Churchill succeeded in pinning down the correct version only after painstakingly sifting through a confusing number of options with his usual algebraic precision. He noted “variations in the vocal inflections” while I detected “differences in the shimmying of the tambourine”. Well, blow me, can the rest of us now get on with our lives.
The accompanying booklet, bulging with anecdotes, historical facts and beautifying illustrations, feels reassuringly weighty. The cover is gorgeous. It’s business as usual.
Feast yourselves.
By Rob Finnis