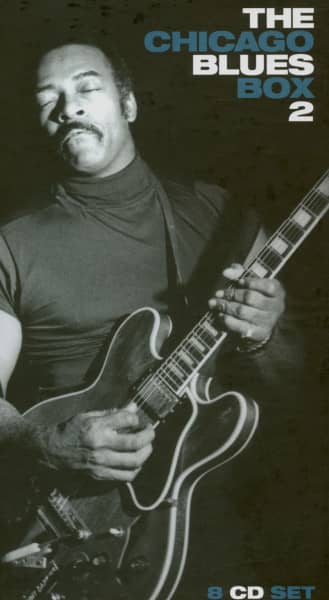 After the popularity of Storyville’s first best-selling boxed set of Chicago blues recordings, we’re delighted to present another outstanding 8 CD collection from the vaults of MCM Records.

As in the first boxed set, the live atmosphere of these unedited performances shines through, revealing the true ambiance of the Chicago Blues club scene in the mid-1970s, as well as the individuals whose talents MCM Records would preserve. They captured an authenticity that rarely surfaced on the major label recordings that some of these artists made.

MCM was a labour of love by a young French woman, Marcelle Chailleux, and her future husband Jacques Morgantini. In the 1950's Jacques had brought the likes of Big Bill Broonzy, Muddy Waters and John Lee Hooker to Europe to appear at his French hometown event - a dedicated Chicago blues festival - but it was recent blues convert Marcelle who travelled to Chicago in the mid-1970s to record a unique collection of live performances.

Some of the performances presented here were by men who would become giants of the blues; others were by talented artists who never found wider fame and whose MCM recordings remain the only surviving evidence of their talent. In this superb collection, you will find rare tracks by Eddie Taylor, Big Mojo Elem, Andrew 'Blueblood' McMahon, Big Voice Odom, Hip Lankchan, Eddie Clearwater, Jimmy Dawkins, Jimmy Johnson, Magic Slim, John Littlejohn, Bobby King and The Aces.

The recordings stem from famous Chicago blues venues Ma Bea’s, the Golden Slipper and Big Duke’s. Marcelle was only just in time to capture the genuine feel and sound of those old-time clubs before they disappeared. Jimmy Dawkins, bluesman par excellence, was her guide to the 1975 Chicago blues scene, and has said: 'It was natural and ‘for real’ without over-preparation. You get the feeling of the room, the music, the audience, and the blues. It was the real thing. Places like Ma Bea’s and the old Golden Slipper are all gone now.' Jacques Morgantini writes in the liner notes: 'These records capture the music that was played in the clubs at that time, the real Chicago blues sound! And that was exactly what Marcelle wanted: to give those musicians a chance to get themselves better known'.