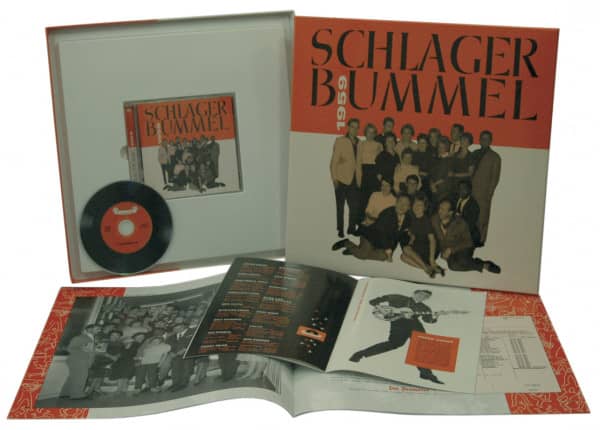 1997 we received the tapes with the'Schlagerbummel 1959'. A sensation! Because that meant being able to publish a real live concert for the first time.
In order to give this unique project an additional, special touch, we had 1200 copies of the original programme reprinted. But that was not all: We contacted all the artists involved in the tour and asked them to sign the reproductions. All performers immediately agreed - except Max Greger. He refused, despite the intercession of some friends, until the end. His name is therefore missing; just like the signatures of Fredy Brock, Max Kutta, Fred Kraus and Charly Müller - these four artists have unfortunately died in the meantime.

Nevertheless, the magazines (to the delight of the transport company UPS...) have made a long journey across Germany, Austria, Switzerland and Italy. With each station the cargo became more valuable thanks to the autographs. There is no question that the search for the whereabouts of many people involved was a hard piece of work. But we were compensated for this by one or two humorous reactions - as the attached letter from the Alpine region proves unsurpassably. We would like to take this opportunity to thank everyone involved for their cooperation. After all, each of you signed 1200 papers.

The German hit of the fifties and early sixties lived not least by the direct contact of authoritative artists to their audience. Schlager parades in large and largest halls and halls, elaborately designed 'Colorful evenings', nationwide tours with stars in the community program brought artists and fans closer together. Sad, but true: There are virtually no live sound recordings from that time. Officially such Schlagerabende were not recorded on tape, a few scattered television recordings are usually deleted without thought or only as a meager snippets have been saved in the present. That's why this CD is a sensation!
The live recording of the 'Schlagerbummels 1959' from the Cologne Exhibition Hall in November 1959 was found by accident. Gathered are popular soloists like Peter Kraus, Ted Herold, Lolita,
Dany Mann as well as the orchestra Max Greger and many others. With hits like Kitty Kat, The White Moon of Maratonga or All Days Love they bound their loyal and enthusiastic followers.
Even for those who could not be there 59 years ago, the fascination of those hours lives here once again. A rare piece of sounding Schlager history, enriched with exclusive photographic material in the booklet, will be made available to all friends of that music for the first time.
google translation