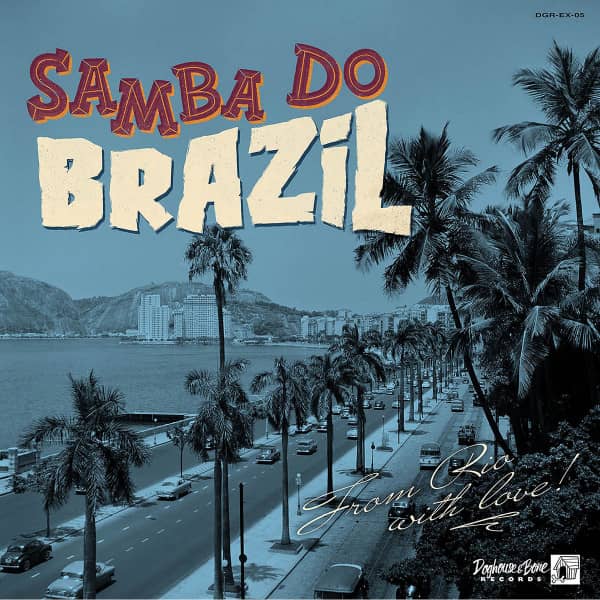 Well, our esteemed producers at Doghouse and Bone are sending us on a one way trip to Brazil via West Africa and the Congo. There the rhythms of the drums pound the beat into our feet directly to Rio where The Samba de Roda is waiting! Lucky for us as we are also booked coach class to Hollywood for a crash course in dance by Les Baxter and his band- We asked Carmen Miranda to join us, but she is busy getting dressed….I know….stay tuned!

Vamos bater!
The blue eyed and blonde statuesque Betty Reilly is a shock to the system when seen for the first time on film. She moves beautifully, plays guitar like she was born with it, and sings in Spanish as a native speaker. As a child, she grew up in Mexico with her parents who owned a swanky resort hotel there. Singing in Spanish, Portuguese and Yiddish, she worked with Xavier Cugat and his orchestra in the 1940’s during the Samba music craze in Hollywood, and appeared in a few post-war films. Her collaboration with Capitol records lead to some fantastic recording sessions with an orchestra conducted by the “Lounge Exotica” composer Les Baxter. Her side, “Magdalena” was one of the Baxter’s first incursions into the Samba genre.
Little did we know how much time he would spend with Brazilian rhythms later, and contribute to the “Bossa Nova” invasion in the USA.

Les Baxter, alongside Martin Denny and Arthur Lyman give us the groove of exotica and it starts right here.
The Batista sisters, Dircinha and Linda (Dircer and Florinda Grandino de Oliveira) have been, without contest, the Queens of Brazilian Samba for the past four decades. They have recorded hundreds of songs and appeared in dozens of films. The sisters were so adept at signing songs of passion and deep love it is hard to believe Dircinha became a recluse in her late 70’s suffering from depression and rarely left her Copacabana apartment. “Enlouqueci” was recorded for RCA in 1948.
As a bass singer in the doo-wop group “Cantores de Ebano” singer Noriel Vilela Bossa Novas the hell out of “16 Toneladas” which of course was a hit for Tennessee Ernie Ford as well as Stevie Wonder. This on the Copacabana label.

Guitar virtuoso Barney Kessel hops on the Samba train in 1962 with his Reprise hit record. Here the sonic quality of “Love for Sale” exemplifies the hi-fidelity dynamics that would define the exotica era.
Gade was a composer of several hits of the Golden era of Brazilian music, having honed his chops playing for the sea-faring public on Brazilian cruise ships during the touristic boom of the 1920’s. With Valfrido Silva as his writing partner they influenced the public greatly with their samba-choro style, and the biggest names in music recorded his songs. He sold toothpaste too, as “O Feitico Virou” was released as a promotional floppy 45’ for Chlorodent.

Samba music may just be responsible for one of the greatest acts to ever appear in show business as Astaire and Rogers dance for the first time together in RKO’s motion picture “Flying down to Rio.” Although, in this picture the singing stars are Mexican actress Delores Del Rio and Gene Raymond. Astaire revives this song at the height of the Bossa Nova craze in the States with a 1962 MGM release.

Born Antonio de Souza and going by the name Milton Banana the self-taught Bosa Nova drummer is famous for plying his trade in a collaboration with Joao Gilberto and Stan Getz. Here he lays down some of his own work on the Castro Neves label.

Put some of this music into the context of 1960 Oscar and 1959 Palme d’Or winner at Cannes, Marcel Camus’s film “Black Orpheus.” The film transposes the Orpheus Myth into Rio during Carnival with exclusively black casting. Audacious for the time it gave strength to so many in a racist world to follow their hearts. Samba’s impact on the world was more than a music fad-