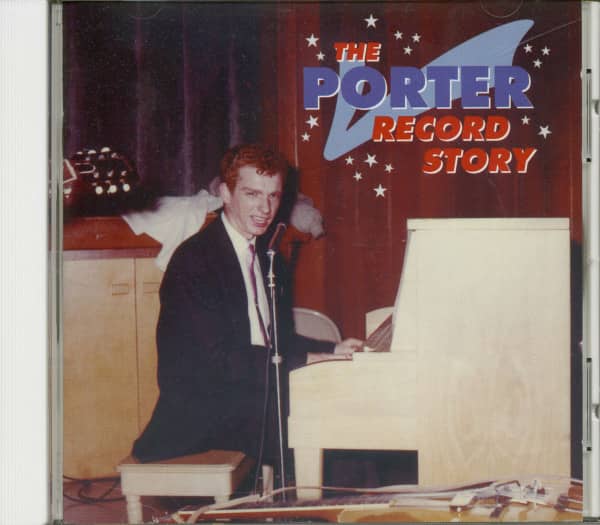 There were many factors that contributed to the birth of the Phoenix music scene. There was work, cheap land, nightclubs, recording studios, a pressing plant, and then there was asthma. It certainly had something to do with the wealth of talent that migrated to 'The Valley of The Sun' for the weather. Many families, including Wayne Newton's and Jimmy Spellman's found relief for their various ailments by traveling west to escape the cold. Porter Records founder Frank Porter was one of these people.
Shortly after arriving in Phoenix from West Virginia in 1954, he was broadcasting on local country radio and recording for Rev Records. By 1957 Porter was ready to launch his own label with masters from Glen McKinny's Nau Voo Records. Soon he was recording his own sessions at his small Porter studio. There was a lot of great music as this CD will attest. Included are rockers by The Rio Rockers, Rusty Isabell,
The Tads, I.V. Leaguers, Billy Adams, Ward Darby, Pete Pepper, Frankie Loren, Red 'Hot' Russell, The Chamberlin Brothers, Don Cole and more.
No one would pretend that Porter Records is much more than a footnote in the history of rock 'n' roll, but footnotes can often be more interesting than the story itself, and that's the case here. Chart fetishists won't find much to excite them, but lovers of that unvarnished Fifties rock 'n' roll sound will find something new and exciting. Some great hot music came from the edge of the desert. You can hear studio musicians like Duane Eddy and Al Casey, who was also producing for Frank Porter. Make no mistake, there are some great rocking sides here.
Like our nifty Duane Eddy box or 'Phoenix Panorama-The Viv Story', this Bear Family release continues to find the best in recorded music from the great Southwest. Check it out!

The Porter label was located in Phoenix, Arizona and had some really fantastic Rockabilly and Rock & Roll releases in the second half of the 1950s! Names like Red “Hot” Russell who’s wellknown to most Rockabilly collectors because of “Stop” or the Rio Rockers which are famous because of their KILLER Chicano Rocker “Mexicali Baby” which already was on many comps like the Capitol “That’ll Flat Git It” (BCD 15624)! “Mexicali Baby” by the way was first recorded at Porter and the recordings were then licensed to the Capitol concern in the same year! But Porter had a lot more Rockers than these artists! Mark Anthony with “Wolf Call”, Frankie Loren with “Hip Monkey” , Rusty Isabell’s “Little Miss Bute”or Darby Ward’s “Peepin’ John” only to name a few!! And the goody on top is that 14 tracks of the 29 were first released in 1998 when the CD came out!! All recordings have the best quality you can get because they were all taken from the original tapes and the stunnish linernotes are written by the Arizona music expert John Dixon who also helped Bear Family on the Duane Eddy Jamie recordings box set (BCD 15778)!! To admit – the cover really doesn’t really look like Rock & Roll at all but what you get on the silverling is what counts and I promise you fellas – this will blow your hat off!! You definitely will not regret the purchase of this fantastic piece of Rockabilly music!