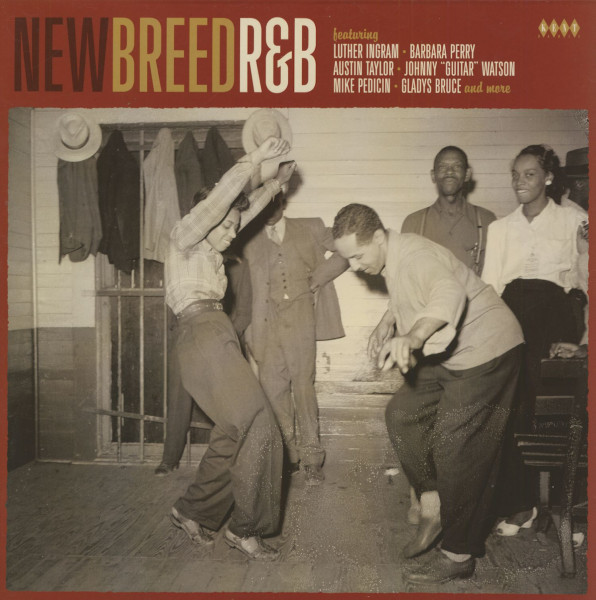 We coined the term New Breed R&B in 2001 when Our inspired selection from the original Kent and Modern labels caught musical zeitgeist. Six CDs on, these offerings are still eagerly anticipat. and the highlights on vinyl having been deemed a must, is now a reality. The mighty B.B. King is the only representative of t.t initial foray, while another black music giant, Johnny Watson, recorded the King family of labels that gave us two of our best received compilations. The surprise RIO success from those imprints, though, was from 44 year old white Philadelphian Mike Pedicin, who was better known for rock'n'roll. His 'Burnt Toast And Black Coffee' was already causing a stir when our collection was issued, but we didn't envisage the subsequent 45 release would become one of our best-ever sellers. The original King pressing eventually rocketed up to the $1,000 bracket.

Certain tracks made the New Breed CDs compulsory, even to analogue champions,as that was the only way to hear some essential recordings. Our access to master tapes gave us a big advantage in finding killer sounds. The opening track here is ultimate version of Fred Bridges' great song 'Oh Baby Don't You Weep', deliver, by Luther Ingram who would go on to become a soul star. It is loved by dancers who just can't resist its opening 'Oh baby don't you'- calls and its mesmeric beat; a Kent exclusive. The mid-2000s was a great time discoveries, although the Fratemity label was an unlikely source. Most of their recordings were on the pop side, including those by black girl group the Charmaines. However, they cut the trio on Ike Turner's 'I Idolize You', a raunchy burst of blues.

You can imagine the staid selection committee, white fac. and shocked, consigning the offering to vaults until Kent's rescue act 40 years later. The company did, however, go with Albert Washington's 'I'm The Man', so they could handle a funky blues number - maybe not by the girls though. New York jazz and blues singer Gredys Bruce had a release on the DIVenus label in 1968 but her best track,  'I've Got A Feeling For You Baby', only made it onto acetate. When unleashed on the New Breed scene many years later, it became a cult hit. Around the same time, Kent were reviewing the Goldwax tapes, having acquired the legendary Memphis imprint from owner and producer Quinton Claunch.

Barbara Perry cut six sides for the company but had only one release. Among the shelved titles was 'A Man Is A Mean Thing', a tune as fast and frantic as R&B gets. I thought it was a bit too manic for the New Breed scene but Geordie DJ Floss had faith and broke it big. Bobby Mitchell was a fine exponent of New Orleans R&B and his 'Well, I Done Got Over It' from 1960 has been another big sound for the scene. Kent Harris' music career began in the early 50s. The composer of 'Cops And Robbers' (covered by Bo Diddley) and 'Clothes Line' (which became 'Shopping For Clothes' the Coasters), he was steeped in R&B before he took to soul. His girl group the Phillips Sisters were closer to the Ikettes than the Ronettes and accusingly asked 'Where Did You Stay Last Night' on Romark in 1964.

Johnny Gosey's housing problems, as described in 'Double Luks', failed to find berth at the time and had to wait for our Kent Harris anthology in 2012. A similarly skint Prince Conley bemoans his own economic plight on the moody and atmospheric 'Hard Tomes', an unissued Satellite/Stax track that sneaked out of the tape library onto a CD in 1995. Like the Johnny Gosey number this Is its debut on a New Breed collection. Record collectors, of course, admire the real McCoy,7inch vinyl - often moreso when it is by a little-known artist on a tiny label. Austin Taylor's 'Why 0 Why' satisfies those criteria and is an action-packed number with an impressive hook, melody and wailing brass section; the unlikely named Sprout Artist is the elusive label.

Also heralding from New York is Sterling Magee, a street performer of the duo Satan & Adam is to be made into a documentary film. He cut several sides with Al Sears and Jesse Stone in the mid-60s, of which the originally unissued 'You're Supreme' is up there with the best.  Although somewhat ghettoised away from the main dancefloors of the rare soul scene nowadays, New Breed continues to win followers and important new discoveries still turn up to keep the movement thriving.