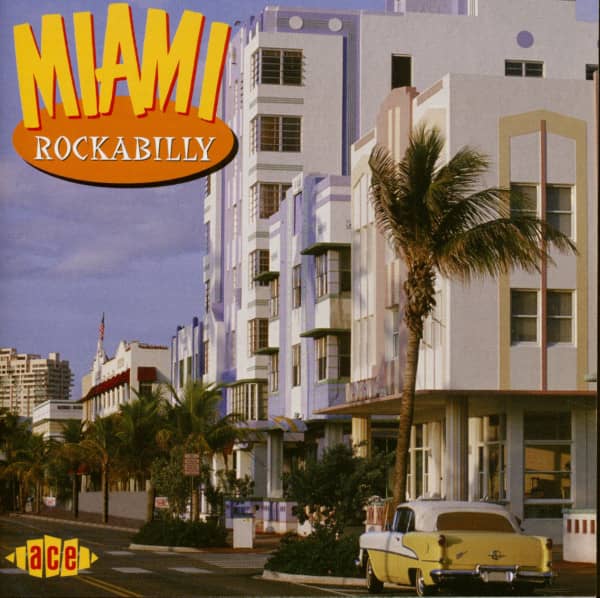 (Ace Records) 32 tracks with 12 page booklet.
-
Wall to wall beaches, balmy weather, palm trees swaying in ocean breezes, and floral splendour are the images associated with Miami and its sister city, Miami Beach which in less than a century rose from a mosquito-infested swamp that is the Everglades to blossom into a sub-tropical metropolis.

* 32 raw hog-wild rockin' tracks
* 3000 + word in-depth sleevenote by Rob Finnis
* $6000 + worth of rockin' 45s on one CD
* Plus 11 bonus tracks unissued in the 50s and up to now only available on poorly mastered, hard to find, limited edition vinyl
-
Miami enjoyed its heyday in the 40s and 50s. Planes trailing long streamers would fly over the beach advertising multi-course meals for $1.50 and the cafeterias teamed with people from all walks of life, many of them retirees or honeymooners earning Miami the dubious reputation as a 'land of the newly wed or the nearly dead'. For many years after the war, Arthur Godfrey's Talent Scouts, one of the most popular shows on American TV, was broadcast from a Miami hotel, further publicising Miami's delights to a nation-wide audience.

Unlike major recording centres such as Memphis or Nashville, Miami lacked a musical identity and attracted very few out-of-town acts. Despite this the area was home to several wild and rocking combos.

Miami Rockabilly, which showcases most of the local rockabilly and rock'n'roll talent active in the area between 1956 and 1960, has been a long time in the making. Ted Carroll tracked down some of the material several years ago and later struck a deal for the remaining songs over a kitchen table in the backwoods of Southern Florida. Rob Finnis made sense of it all and researched an in-depth sleevenote. The result is a value-for-money 32-tracker crammed with ultra-rare rockabilly gems most of which are making their CD debut here, remastered from original tapes or acetates by Sound Mastering's Ace boffins (pun intended). If one or two of these tracks sound a bit cheesy, then that's the way it was in the studio on the day.

Perhaps the best known recording on Miami Rockabilly is Tommy Spurlin's Hang Loose. Originally issued in 1956 (only in the USA) it became hugely popular during the British rockabilly revival of the late 70s and a timely re-issue on a specialist label was a perennial seller. Another of Spurlin's songs, Heart Throb was featured in the frat movie smash 'Porky's' some 25 years after it was recorded. Also included are Curley Jim Morrison's ultra-rare UK release Airforce Blues and such obscurities as Wes Hardin's Any Way and Ross Minimi's frantic 1959 workout, Baby Rock. These last two would cost in the region of $1200 if one wished to acquire the original AFS and Gulfstream label 45s. And if you like your rockabilly wild, woolly and uncompromising then Ray Pate & The Rhythm Rockets' adrenaline charged 2-sider, My Shadow c/w Lucky Day will suit. These are a few of the impossibly hard-to-find 45's on a CD that surely qualifies as one of the best rockabilly issues of 1998. (Crawford Anderson)