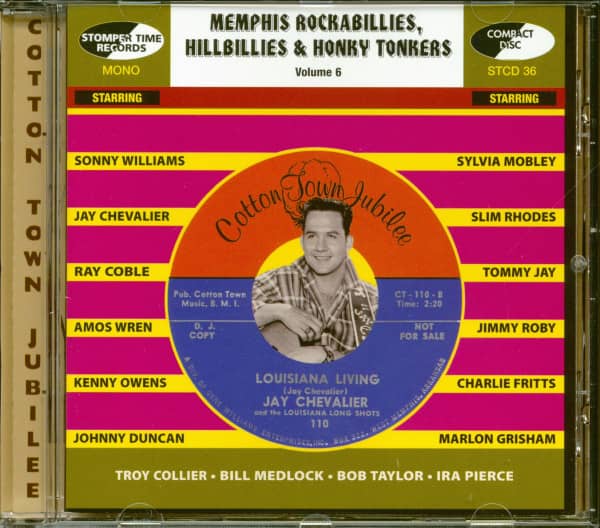 (2016/Stomper Time) 40 tracks (79:30) 20 page booklet!
A generous 40 tracks taken from Gene Williams' West Memphis-based Cotton Town Jubilee Record Company. The label, one of the last in Memphis to have a proper reissue, released a great selection of R'n'R, Rockabilly and Hillbilly from 1962 until its closure in 1971. 20-page booklet contains rare photos and full discography!

In the grand scheme of musical matters, the name of Gene Williams may well not mean much to many people,but it is fair to say that this man of Dyess,Arkansas and one time neighbour of Johnny Cash, surely has a story to tell. Determined to make it somewhere in Show Business, Gene literally talked his way into having a Radio Show at KWAM in Memphis in 1957. His DJ work lit up the airwaves,the show was extended and he also became the Station's sales manager. Ever ambitious, by January 1962, Gene was running the 'Cotton Town Jubilee', a live radio show broadcast over KWAM every Saturday night, which lead to him opening the Cotton Town Jubilee Record Company later in that year,kicking off with the excellent Sonny Williams,his first signing.

The CTJ radio show featured a variety of singers and musicians, who became regulars on the show and would record a large number of singles for the label. There were however exceptions,one being Jay Chevalier from Louisiana, who gained considerable fame for his political songs and a song about Billy Cannon a well known footballer. Jay was with CTJ for 2 years producing singles and an L.P. and is still working to this day. Another star of Memphis radio and records was Slim Rhodes, who began broadcasting his family band in the 1930's. Slim's main claim to fame today is the fact that he recorded a number of strong sides for Sam Phillips at Sun, which are much sought after in today's world of Sun Records collectors. In 1963,Slim recorded a 'Live' in the studio LP for CTJ and 3 of the Hottest tracks are included here.

Whilst the radio show flourished, Gene began his long running 'Country junction TV Show', which offered the same cast as the radio show,but with a few more guest stars of the era such as Merle Haggard and Ray Price. In 1968,the Big Screen beckoned and Gene and several members of his show were featured in 'The Sound of Country Music' with Marty Robbins, Faron Young, Webb Pierce and Ray Price. In 1969 Gene financed his own movie 'Country Music Jamboree', which exclusively featured the singers and musicians of the Jubilee.A soundtrack LP was issued, but Gene had already decided to shut down Cotton Town Jubilee records having had no hits and only local sales. On this CD are 40 of the finest recordings made for the label. There is a taste of Rock'n'Roll,Rockabilly,Hillbilly,Honky Tonk and a spectacular 1.20" of Bluegrass. I believe that only 3 of these titles have been released in the UK before,so this CD represents a 'breath of fresh air'for the music market place, albeit a long way from Arkansas.